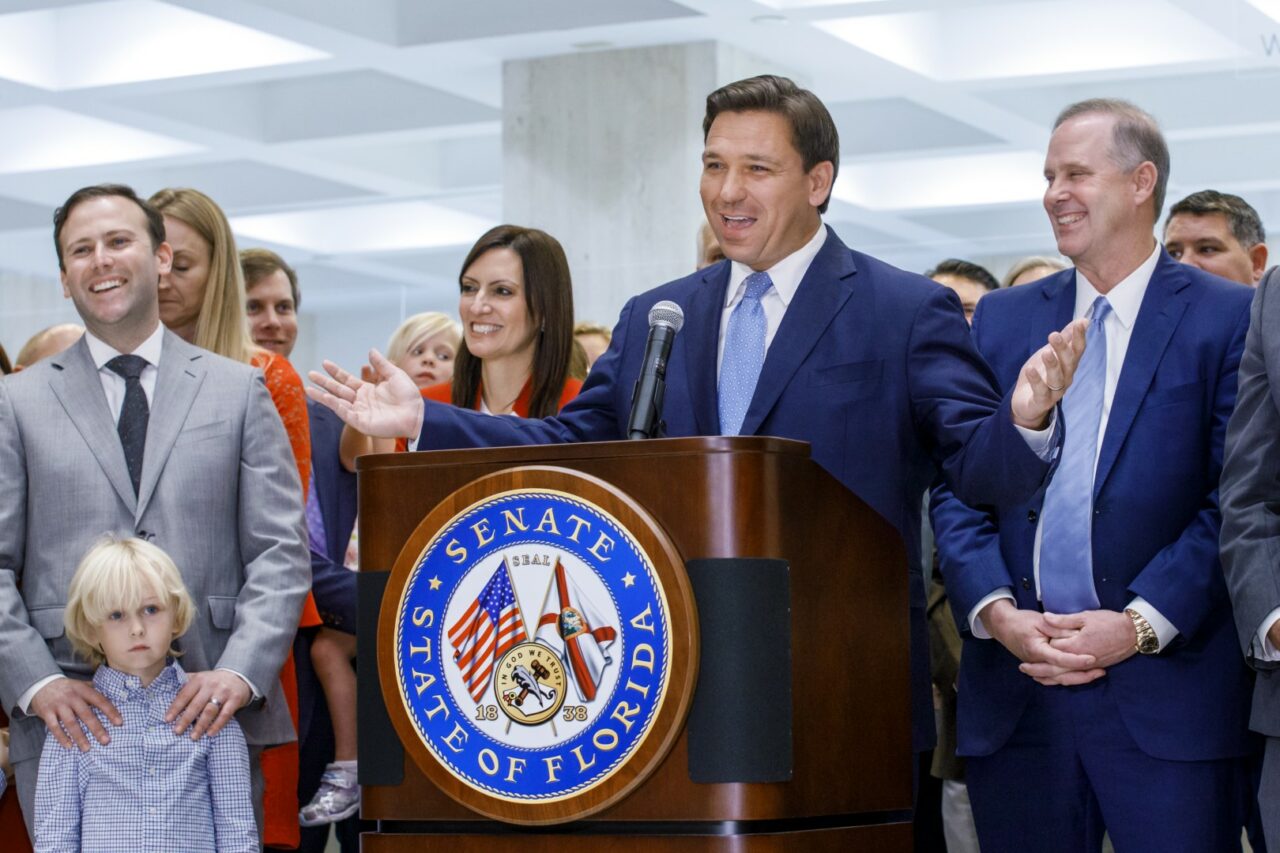 Only Fox & Friends had the stream while other reporters were locked outside the conference room.

The event, hosted at the Hilton at Palm Beach International Airport, took place one week after the Republican-led Legislature passed the elections bill (SB 90). That measure, which took effect upon DeSantis’ signature, incorporates much of his plan to erect what one lawmaker called “guardrails” around mail-in ballots and election administration law.

The Governor held to a promise made in February when he told a crowd in the same hotel that he would return to sign the bill there in May.

“Right now, I have what we think is the strongest election integrity measures in the country,” DeSantis said immediately before signing the bill.

Bill signing ceremonies are frequently held behind closed doors, if there’s a ceremony at all. However, those ceremonies are rarely turned into made-for-TV exclusives.

“You came with graphics,” “Fox & Friends” co-host Steve Doocy interjected at one point after the Governor held up a placard with bullet points on the bill’s major components.

Media, except for the conservative media giant, weren’t allowed at the rally, prompting complaints from Democrats and reporters. U.S. Rep. Charlie Crist, a Democratic challenger for Governor hoping to retake the Governor’s mansion, quickly criticized DeSantis for the move.

“This is the difference between (DeSantis) and me. He locks out the public and caters to FOX News,” Crist tweeted. “When I was Governor, everyone was invited in — Democrats, Republicans, and independents. And when I’m Governor again, this will be a Florida for all.”

“Really, it’s kind of pathetic,” he continued in a statement. “This anti-democracy crowd in Tallahassee is unbelievable. What they need to do is encourage people to vote.”

Crist also posted a video commenting on the bill signing, recorded in a car on his way to a campaign stop in Jacksonville.

“Now, if you’re in a long line, you can’t get water from somebody, you know, especially if you’re 150-feet from voting. So, if you’re thirsty, too bad,” Crist said. ‘You know what, they ought to practice the golden rule — do unto others as you would have done unto you.”

Agriculture Commissioner Nikki Fried, another Democrat considering a run against the incumbent, was even quicker to the punch, tweeting her response minutes before Crist did.

“(DeSantis) can’t stand the heat of the public while he’s suppressing the vote. So weak,” she wrote.

The airport is less than three miles down the road from Mar-a-Lago, the new residence of former President Donald Trump. Trump’s election loss to President Joe Biden in November and the former President’s “big lie” about a stolen election helped spawn election law proposals across the country, including in Florida.

DeSantis and Republican leaders have touted Florida as the gold standard in election laws after the 2020 campaign, and many Democrats agreed. However, Republicans said they want to build on those successes.

“We think this will make it even better as we go forward, and so we’re proud of the strides that we’ve made,” DeSantis said. “We’re not resting on our laurels, and me signing this bill here says ‘Florida, your vote counts, your vote is going to be cast with integrity and transparency, and this is a great place for Democracy.'”

A watered-down version of the ballot harvesting proposal made it into the final bill, and many of his dropbox recommendations did too. Among those are an expanded no-solicitation zone around polling places and a prohibition on handing out items, including food and drink, with the intent to sway a voter’s opinion. Ballots will also face increased signature review standards.

One bill sponsor, Rep. Blaise Ingoglia, said he wanted to outlaw possessing a ballot other than your own. However, the final version allows people to carry the ballots of family members as well as two others.

“We’re not going to let political operatives go and get satchels of votes and dump them in some dropbox,” DeSantis said.

“Safeguarding and maintaining the integrity of our elections is important to all of us,” Simpson said. “We all lose when people have no confidence in the integrity of an election. That’s what we want to avoid. We don’t want to backslide.”

Some Democrats have called the bill voter suppression and likened it to “Jim Crow 2.0.” Among them was Sen. Shevrin Jones of West Park.

“This blatant voter suppression in Jim Crow 2.0 and will make it harder for voters — from low-income rural, White communities to the elderly to communities of color — to have their voices heard. It is clearly part of a coordinated, targeted assault strategy as Florida joins a long list of states pursuing similar disenfranchisement efforts in recent months,” he said in a statement.

Others, Jones included, have compared it to Georgia’s recently signed law, calling it “Georgia-like” and “Georgia-lite.”

Republicans’ counter during legislative debates was that there are several ways to vote in Florida, making it hard to not vote.

“Floridians have more options to cast their ballot than ever before,” House Speaker Chris Sprowls said. “With that variety must come assurance of security, accountability, and transparency.”