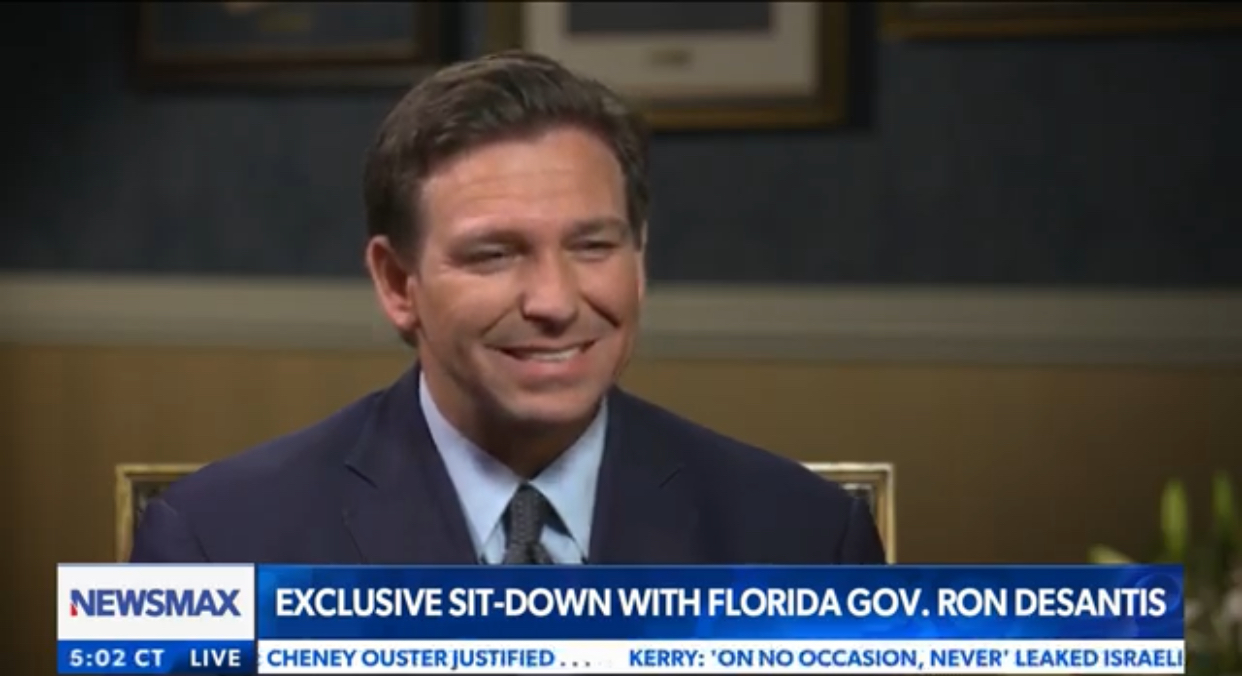 Sean Spicer spent an hour with the Governor in the Villages.

While the Fox News Channel helped to make Gov. Ron DeSantis a viable candidate for Governor in 2018, it’s no longer the only right-leaning cable outlet.

In a nod to the increasing significance of the upstart Newsmax network in the conservative media landscape, the Governor was showcased Wednesday in a pre-taped town hall event.

Host Sean Spicer described a smiling DeSantis as an “underdog.”

“I’ve been underestimated by the political class for sure from the very beginning,” DeSantis confirmed, before going on to describe a bias against conservatives in the press.

“If you have an R by your name, certain people — if I walked on the ocean, they’d say DeSantis can’t swim,” DeSantis said.

He went on to describe corporate media as “off the rails,” “lying and gaslighting people for profit.”

“The media and the narratives and the nonsense” nettled DeSantis throughout the town hall, including his energetic defense, familiar to Florida followers, of his decision to buck the lockdown trend during the pandemic.

The move didn’t surprise the Governor.

“They were treated horribly in New York,” DeSantis said of the Trump family, describing a friendly relationship with the former President that includes humorous banter.

Topical issues, including the Republican vogue to trim the unemployment rolls, also came up.

“I would rather give somebody a bonus for going back to work than pay them not to work,” DeSantis added, drawing applause.

Asked about illegal immigration during the town hall component of the program, DeSantis slammed the Biden administration for “undoing” Trump deportation policies.

“When these criminal aliens get out of prison, Biden is releasing them into society,” DeSantis said, decrying the “deliberate choice” from the administration to have a “totally open border.”

“That’s not the way a sovereign country behaves,” DeSantis chided, sounding as he often does, like a national conservative figure.

DeSantis’ 2022 and 2024 plans are matters of much speculation. The Governor’s political committee recorded nearly $14 million in contributions in April for the reelection campaign, which DeSantis says is his only focus.

“We think that the future of Florida is really bright. But we also tell people that in 2018, I won by half a percentage point. It was a very close election,” DeSantis said.

He went on to cast aspersions at Andrew Gillum, his 2018 opponent, saying that Gillum winning would have been a nightmare scenario.

“Sometimes people will say, ‘oh the realtor of the year should be Michigan’s Governor, New York’s Governor, because they’re driving all these people here.’ I say, ‘wait a minute. If I had not won in 2018, you guys would be wishing you had the Governor of Michigan.'”

“This state would be a total disaster. We would have had kids locked down in school, we would have had the Cuomo nursing home policy. It would have hurt our seniors. They would not have done seniors first for the vaccines. And I think we’d have the highest unemployment rate in the country,” DeSantis added.

The Governor is in the running for the Republican Presidential nomination, second only to Donald Trump in prediction markets at this writing, and generally polling at the top of fields without Trump in the list of options.

One potential 2022 opponent, Agriculture Commissioner Nikki Fried, has suggested that DeSantis would bail on a second term if reelected.