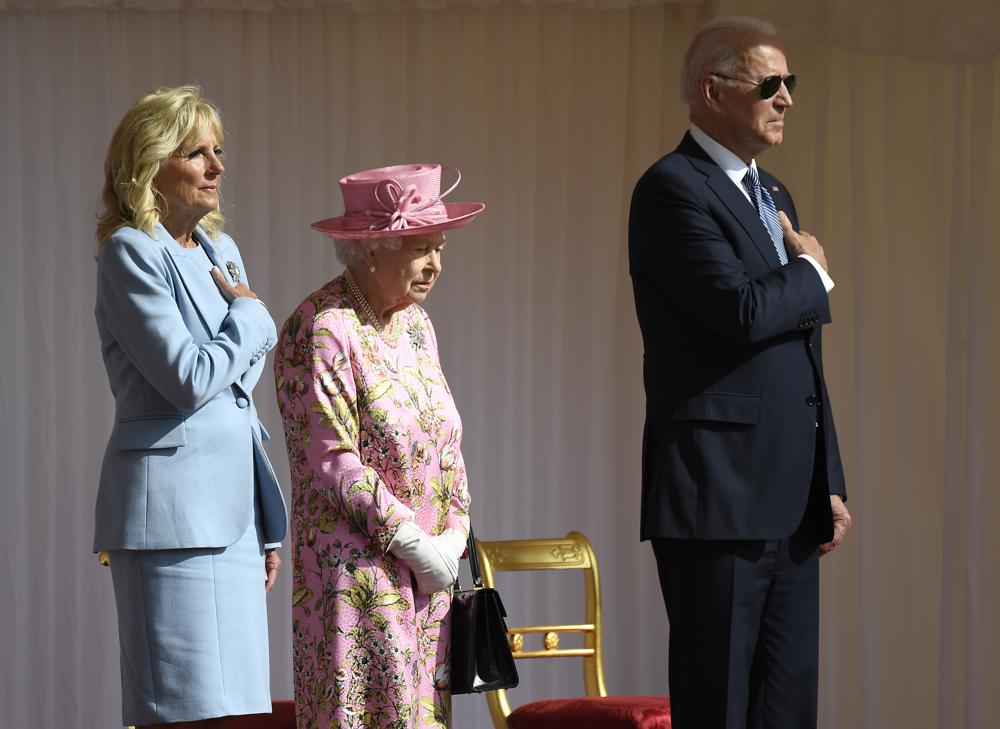 Biden flew to London after wrapping up his participation in the G-7 summit.

The queen hosted the President and First Lady Jill Biden at Windsor Castle, her royal residence near London. Biden flew to London after wrapping up his participation in a three-day summit of leaders of the world’s wealthy democracies in Cornwall, in southwestern England. He arrived at the castle aboard the presidential helicopter and was ferried to the queen in a black Range Rover.

The 95-year-old monarch greeted the Bidens in the castle’s quadrangle, where she waited beneath a covered dais that shielded her from the sun. Assembled soldiers from the Queen’s Company First Battalion Grenadier Guards gave a royal salute and the Bidens placed their hands over their hearts as the U.S. national anthem was played.

The President was then led along a row of troops standing at attention on the grass. He wore a stern expression on his face after he had removed his trademark sunglasses, but when the 78-year-old Biden got to the end of the row, he smiled for the soldier in front of him who held up a sword. The Queen and Jill Biden remained on the dais.

The Bidens then headed inside to take tea with the woman who has held the British throne for nearly 70 years. As they left the dais, Biden offered an elbow to the white-gloved Queen. She did not take his arm, and stepped down while holding the handrail.

The Bidens emerged from the castle just shy of having spent a full hour with the Queen and boarded the helicopter for the return trip to London.

Biden is the 13th American President to meet the monarch. President Lyndon B. Johnson is the only one who did not make her acquaintance while he was in office.

She has welcomed four other U.S. presidents to Windsor Castle, where she has been isolating during the coronavirus pandemic. They are Donald Trump in 2018, Barack Obama in 2016, George W. Bush in 2008 and Ronald Reagan in 1982.

Biden’s first time meeting the Queen came in November 1982, when as a U.S. Senator he traveled to the United Kingdom for a meeting of the British-American Parliamentary Group, the White House said Sunday. Biden was part of a group that met with the monarch during that visit.

The Queen has been riding out the pandemic at Windsor Castle, but also has begun getting out now and again after the April death of her husband, Prince Philip, at age 99.

On Friday, she joined other royal family members, including Prince Charles and Prince William and their spouses, at a reception in Cornwall for the Group of Seven leaders.

previousSchools across U.S. brace for surge of kindergartners in fall