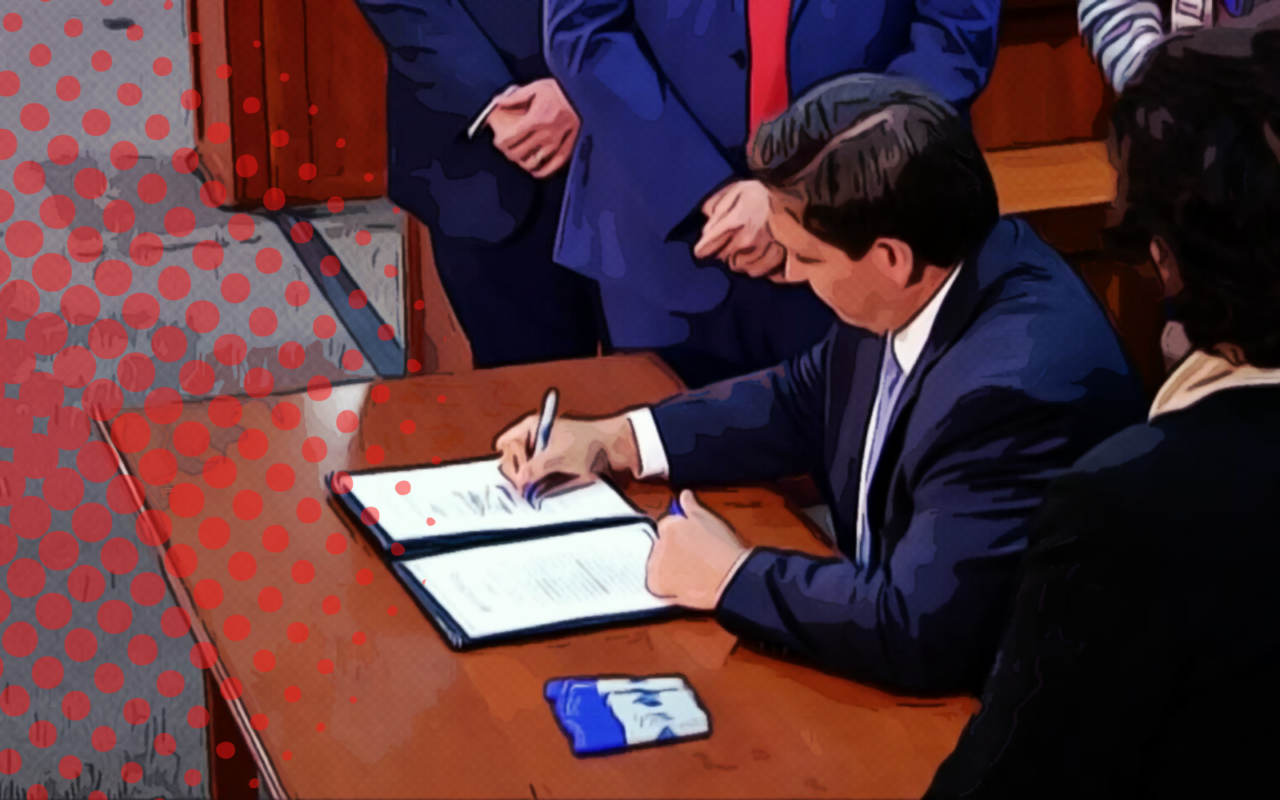 People are lacking the education and critical thought that are necessary for a strong society, the Governor says.

Speaking at a Fort Myers middle school, DeSantis stressed the need for a robust civic understanding and a diversity of thought to provide people with the fundamentals of their rights and duties as citizens.

DeSantis, already a frontrunner for the 2024 Republican presidential nomination if he chooses to run, has been riding the recent resurgence of conservatives’ fight over education in recent weeks. The bill signatures are the latest in a flurry of education measures DeSantis has pushed in that time.

At his request earlier this month, the Board of Education voted to prohibit schools from teaching “critical race theory,” which is based on the premise that racism is embedded within American society and institutions. The controversial theory — which isn’t taught in Florida public schools — has become a national flashpoint for Republicans in the lead-up to the 2022 elections.

Two of the measures address civics education. The first (HB 5), which passed the Legislature unanimously, requires the Department of Education to revamp government education, including through “Portraits in Patriotism,” a video library of first-person accounts from immigrants who lived under authoritarian regimes.

High school government courses will include a comparative discussion of political ideologies. The measure also includes lessons on the “evils of communism and totalitarianism.”

“We have a number of people in Florida, particularly southern Florida, who’ve escaped totalitarian regimes, who’ve escaped communist dictatorships to be able to come to America,” DeSantis said. “We want all students to understand the difference. Why would somebody flee across shark infested waters, say, leaving from Cuba to come to southern Florida?”

He also cited surveys showing a lack of civics knowledge among Americans, including the answers to questions on the citizenship test. A robust civics education, he added, is necessary for all people, regardless of their career, to have a strong foundation to be informed of the rights and duties that come with being a citizen.

The second bill (SB 1108), which also passed unanimously, will require state colleges and universities to require a civic literacy course and assessment as graduation requirements. High schoolers will also be tested on civics, and a passing score would allow them to skip those requirements.

The third and more controversial measure (HB 233) will prohibit the state Board of Education and Board of Governors from shielding students, staff and faculty from certain speech, namely speech from particular ideologies. Additionally, the bill will require those academic governing bodies to annually survey the viewpoints of college and university professors “to assess the status of intellectual freedom and viewpoint diversity.”

Under the bill, which passed despite opposition from most Democrats and a pair of Republicans, school leadership can’t “shield” students from free speech protected under the First Amendment. They couldn’t limit students’ access to ideas and opinions they may find uncomfortable, unwelcome, disagreeable or offensive.

Central to the Governor’s call for strengthening civic understanding is critical thinking and debate, which he said has become a lost art. Students head off to college campuses and return “indoctrinated,” DeSantis, a Yale University and Harvard Law School graduate, said.

“We do not want them as basically hotbeds for stale ideology,” he added. “That’s not worth tax dollars, and that’s not something that we’re going to be supporting going forward.”

Social media and corporate media play into the ideological bubbles people find themselves in, the Governor continued.

“A lot of these big corporations that have news divisions, they do narratives, and they do partisan advocacy, basically. They’re not really wedded to the facts,” DeSantis said.

House Speaker Chris Sprowls prioritized several education measures this year, including civics education bills. The Portraits in Patriotism Act, he said, was inspired by the Holocaust Museum, which features videos from survivors.

“They were able to answer back in this virtual setting and record those for posterity, so long after those folks were gone,” Sprowls said.

Republican Rep. Ardian Zika, an immigrant from what is now Kosovo, sponsored the Portraits in Patriotism legislation. He called himself a product of American exceptionalism before listing American statesmen that have risen out of poverty, been the children of immigrants or been immigrants themselves.

Education Commissioner Richard Corcoran stressed that American exceptionalism is based on a self-governing society.

“In order to do that, you have to have a knowledgeable citizenry, you have to raise up critical thinkers, people who can work outside the box, and synthesize large volumes of information, and that’s the game changer,” Corcoran said.

What better way to learn civics than to hear from an immigrant who fled from an oppressive regime? They and so many others are part of the unique American story. HB 5, signed by @GovRonDeSantis today, uses the voices of the past to teach the leaders of tomorrow. pic.twitter.com/fXRYVSAuW0