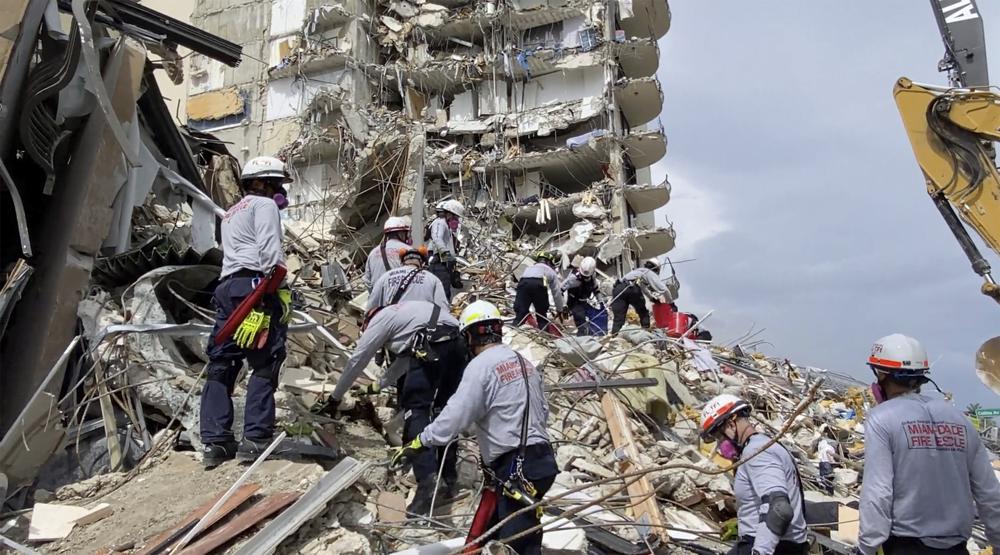 Two days after the collapse, 159 remain unaccounted for.

Fire has spread amid the rubble of the collapsed condominium in South Florida, hampering rescue efforts, officials said Saturday.

The flames are deep and firefighters have not been able to find their source, Miami-Dade Mayor Daniella Levine Cava said during a news conference.

“We’re facing very incredible difficulties with this fire,” she said. “It’s a very deep fire. It’s extremely difficult to locate the source of the fire.”

She said 159 remain unaccounted for two days after the collapse of the 12-story Champlain Towers South in Surfside.

This is a breaking news update. AP’s earlier story follows below.

The oceanfront condominium building that collapsed near Miami had “major structural damage” to a concrete slab below its pool deck that needed to be extensively repaired, according to a 2018 engineering report on the building.

The report was among a series of documents released by the city of Surfside as rescuers continued to dig Saturday through the rubble of the building in an effort to find any of the 159 people who remain unaccounted for after its collapse. At least four people were killed.

Surfside Mayor Charles Burkett said firefighters also battled a fire believed to be burning inside the collapsed building’s underground parking garage. Smoke created a haze at the base of the building.

“Cars were probably crushed and we have fluids leaking out and it ignited, having created this nasty fire,” he said.

Emergency responders were monitoring for explosive gases but had detected none, he added.

While the engineering report from the firm of Morabito Consultants did not warn of imminent danger from the damage — and it is unclear if any of the damage observed was responsible for the collapse — it did note the need for extensive and costly repairs to fix the systemic issues with the building.

It said the waterproofing under the pool deck had failed and had been improperly laid flat instead of sloped, preventing water from draining off.

The firm recommended that the damaged slabs be replaced in what would be a major repair.

The report also uncovered “abundant cracking and spalling” of concrete columns, beams and walls in the parking garage. Some of the damage was minor, while other columns had exposed and deteriorating rebar. It also noted that many of the building’s previous attempts to fix the columns and other damage with epoxy were marred by poor workmanship and were failing.

Beneath the pool deck “where the slab had been epoxy-injected, new cracks were radiating from the originally repaired cracks,” the report said.

Abi Aghayere, a Drexel University engineering researcher, said the extent of the damage shown in the engineering report was notable. In addition to possible problems under the pool, he said several areas above the entrance drive showing signs of deterioration were worrisome and should have been repaired immediately because access issues prevented a closer inspection.

“Were the supporting members deteriorated to the extent that a critical structural element or their connections failed leading to progressive collapse?” he wrote in an email to the AP after reviewing the report. “Were there other areas in the structure that were badly deteriorated and unnoticed?”

At the site where the building once stood, scores of rescuers used big machines, small buckets, drones, microphones and their own hands to pick through the mountain of debris that had been the 12-story Champlain Towers South.

On Saturday, a crane could be seen removing pieces of rubble from a more than 30-foot pile at the site. Firefighters were still dealing with smoke that continued smoldering underneath the rubble.

Miami-Dade Mayor Cava told WPLG early Saturday that there was no change in the number of people still unaccounted for. “We are at status quo,” she said. “I’m hopeful this will be a day that we have will have a breakthrough.”

Rachel Spiegel was anxious for any update on her missing mother, 66-year-old Judy Spiegel, who lived on the sixth floor.

“I’m just praying for a miracle,” Spiegel said. “We’re heartbroken that she was even in the building.”

Jeanne Ugarte was coming to grips with what she feared was a tragic end for longtime friends Juan and Ana Mora and their son Juan Jr., who was visiting his parents in their condo at the tower.

Hopes rested on how quickly crews could complete their grim, yet delicate task in Surfside, just a few miles north of Miami Beach’s South Beach.

“Any time that we hear a sound, we concentrate in that area,” Miami-Dade Assistant Fire Chief Raide Jadallah said. “It could be just steel twisting, it could be debris raining down, but not specifically sounds of tapping or sounds of a human voice.”

Burkett said crews were doing everything possible to save as many people as they could.

“We do not have a resource problem, we have a luck problem,” he said.

Flowers left in tribute decorated a fence near the tower, and people awaiting news about the search watched from a distance, hands clasped and hugging. Congregants prayed at a nearby synagogue where some members were among the missing.

Miami-Dade Police Director Freddy Ramirez said authorities were working with the medical examiner’s office to identify the bodies that have been found. Eleven injuries were reported, with four people treated at hospitals.

“Debris is falling on them as they do their work,” she said. “We have structural engineers on-site to ensure that they will not be injured, but they are proceeding because they are so motivated.”

Teenager Jonah Handler was rescued from the rubble hours after the collapse, but his mother, Stacie Fang, died. Relatives issued a statement expressing thanks “for the outpouring of sympathy, compassion and support we have received.”

“There are no words to describe the tragic loss of our beloved Stacie,” it said.

While officials said no cause for the collapse early Thursday has been determined, Gov. Ron DeSantis said a “definitive answer” was needed in a timely manner. Video showed the center of the building appearing to tumble down first, followed by a section nearer to the beach.