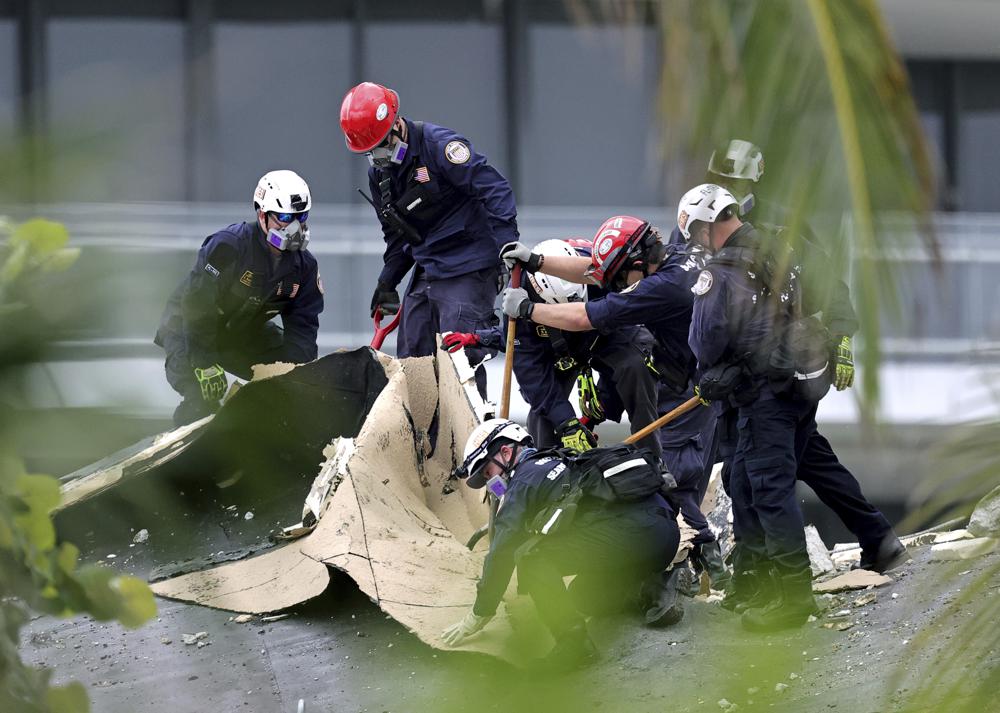 Asked what he would do if he lived in the collapsed building’s twin, Burkett said: “I’d be gone.”

The mayor of Surfside, Florida, said Saturday he is working on a plan to temporarily relocate residents of a condominium tower built by the same developer of the nearby building that collapsed earlier in the week.

But Mayor Charles Burkett said he was not yet prepared to order everyone in the building to evacuate.

Burkett also said he’s trying to arrange an emergency inspection of Champlain Towers North, which was constructed the same year and by the same developer as the crumbled 12-story Champlain Towers South. It sits about 100 yards (about 91 meters) away, along Collins Avenue, which runs parallel to the Atlantic Ocean north of downtown Miami.

Until that happens, Burkett said he can’t tell residents whether they’re safe in their homes.

“I know that the identical building collapsed for an inexplicable reason,” Burkett said. “Buildings in the United States do not just fall down… Something very, very wrong was going on at that building and we need to find out.”

Asked what he would do if he lived in the collapsed building’s twin, Burkett said: “I’d be gone.”

The mayor stopped short of saying he would order residents to evacuate.

“If there are those folks that feel confident that there is not an issue, we don’t want to force them out of their homes,” Burkett said. “However, for those that are frightened and concerned, I wanted to make sure that they had options.”

He said the Federal Emergency Management Agency has agreed to pay for temporary lodging for residents who agree to leave. He said it’s still undetermined where they would stay.

Burkett said city officials are also gathering details about a third building, Champlain Towers East, that’s built in a different style and appears to have been constructed at a different time. Because of the name and its close proximity to the other two, the mayor said, officials want to determine if there are safety concerns with that condo building as well.

The south tower, which partially collapsed early Thursday morning, had 136 units, while the north tower has 111 units, records show. Both were built in 1981.

Four people have been confirmed dead and 159 remained unaccounted for on Saturday morning as a massive search and rescue mission continued — hampered by a deep-rooted fire underneath the rubble.

During a news conference on Saturday morning, Florida Gov. Ron DeSantis said he’s spoken with Burkett regarding concerns over the building’s safety.

“I don’t know if there’s any indications that there’s any problems with that building,” DeSantis said. “But just given the similarities, given the same age, they think that may be something.”

Also on Saturday, authorities also announced they are beginning an audit of buildings nearing their 40-year review — like the fallen Champlain Towers South — to make sure they’re safe.

The news followed word of a 2018 engineering report that showed the building had “major structural damage” to a concrete slab below its pool deck that needed extensive repairs. It was part of a series of documents released by the city of Surfside.

The report from the firm of Morabito Consultants did not warn of imminent danger from the damage — and it is unclear if any of the damage observed was responsible for the collapse — it did note the need for extensive and costly repairs to fix systemic issues with the building.

This included the waterproofing under the pool deck, which had been improperly laid flat instead of sloped, preventing water from draining off.