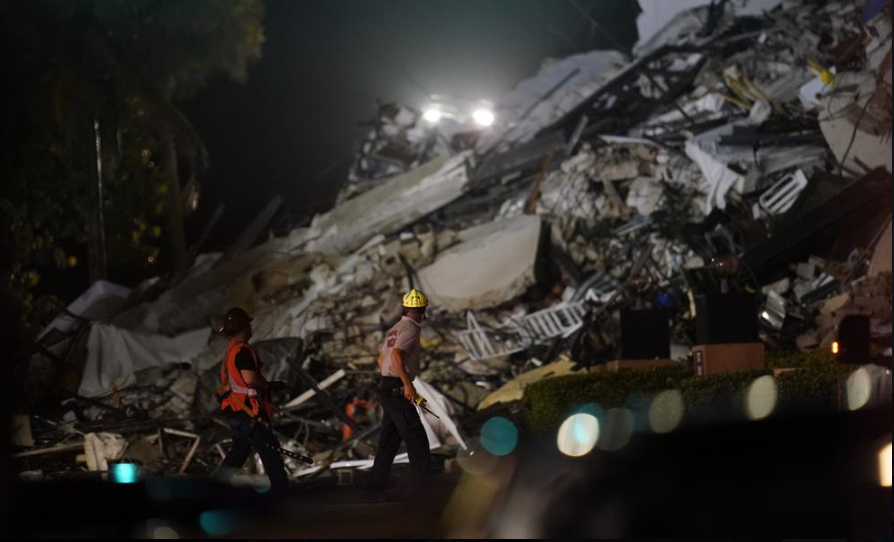 More than 110 people are still unaccounted for.

Rescue teams searching through rubble from the collapsed Champlain Towers South condo in Surfside have discovered four additional bodies, increasing the total number of deaths to 32, according to Miami-Dade Mayor Daniella Levine Cava.

There are still 113 people unaccounted for, but the county could only confirm that 70 were in the building at the time of collapse, she told reporters at a Tuesday morning press briefing.

About 10:30 p.m. Sunday, a demolition team brought the remainder of the building down. The controlled leveling of the tower “was executed exactly as planned,” she said, adding that while the decision to demolish the building was “devastating,” it was necessary to allow search and rescue work to recommence.

Thirteen days since Champlain Towers South partially collapsed in the early morning of June 24, time and circumstances present a grim outlook. No survivors have been found since the first few hours of the collapse, and conditions will worsen as Tropical Storm Elsa approaches.

While the storm is likely not to directly pass over Miami-Dade — it’s instead headed toward the west coast of Florida — meteorologist Robert Molleda of the National Weather Service said the county will still see intermittent showers, thunderstorms, “gusty winds,” heavy rain and possibly localized flooding and “one or two tornadoes across South Florida” on Monday and Tuesday.

“Later today, we will begin implementing plans to redeploy our assets at the collapsed site,” he said.

Per the Associated Press, BG Group received a $935,000 contract from the state.

“Only dust (from the demolition) landed on the existing pile,” Levine Cava said.

In the days prior to the demolition, the Mayor said, including just hours before, Miami-Dade Fire Rescue personnel and other first responders conducted “multiple, full sweeps of the building in person, including searching in closets, under beds and other hiding places” to find pets that were left behind when residents fled the unstable structure.

In areas inaccessible to rescue teams, she said, workers “at great personal risk” used ladders atop cranes to place animal traps on balconies and propped open doorways to allow pets to escape the building. They also used drones to explore the wreckage and the part of the building that stood before Sunday night.

Investigations into the collapse are ongoing and will be complicated. State Attorney Katherine Fernandez Rundle has mentioned plans for a grand jury to get involved. The National Institute of Standards and Technology used LiDAR technology to map the interior of the still-standing portion of the structure prior to its razing.

“They have had teams that have been exploring every part of the building they’ve had access to,” Levine Cava said. “They’ve been interviewing people. So, the investigation will continue over a long period of time.”

In 2018, a structural engineering report given to the Champlain Towers condominium association warned of design flaws and structural issues that would cause “exponential damage” if left unaddressed.

Among them: faulty waterproofing of a pool deck, which had caused “major structural damage” to a concrete slab over the building’s garage, engineering consultant Frank Morabito wrote.

The cost to fix that and other issues was estimated then to be about $9 million.

In an April letter to residents urging corrective action ahead of “accelerating” concrete damage, Champlain Towers South Board President Jean Wodnicki said the cost was closer to $16 million.

“Our goal is to work with fire rescue to recover family members and make those notifications,” he said. “As this moves forward, we’ll have those linear investigations, and we’ll be working under the scope of our state attorney, Kathy Rundle, who’s also involved in this process, (which) will be very thorough.”