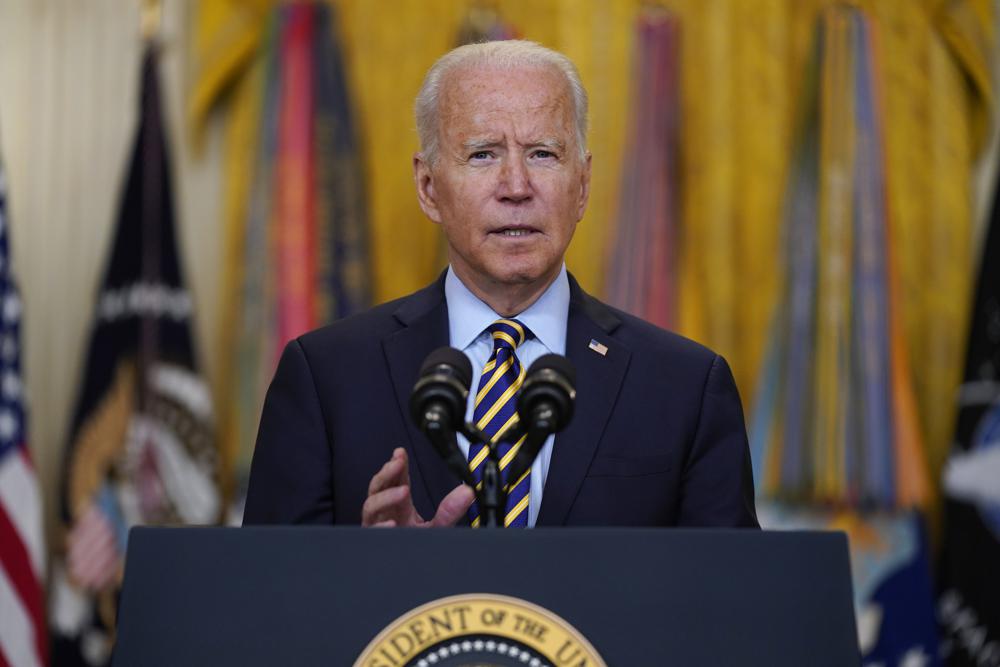 Biden said he trusted the capacity of the Afghan military to defend the government.

President Joe Biden on Thursday said the U.S. military mission in Afghanistan will conclude on Aug. 31, saying “speed is safety” as the United States seeks to end the nearly 20-year war.

“We did not go to Afghanistan to nation build,” Biden said in a speech to update his administration’s ongoing efforts to wind down the U.S. war. “Afghan leaders have to come together and drive toward a future.”

Biden also amplified the justification of his decision to end U.S. military operations even as the Taliban make rapid advances in significant swaths of the country. The administration in recent days has repeatedly sought to frame ending the conflict as a decision that Biden made after concluding it’s an “unwinnable war” and one that “does not have a military solution.”

“How many more, how many more thousands of American daughters and sons are you willing to risk?” Biden said to those calling for the U.S. to extend the military operation. He added, “I will not send another generation of Americans to war in Afghanistan, with no reasonable expectation of achieving a different outcome.”

Biden said he didn’t trust the Taliban but trusted the capacity of the Afghan military to defend the government.

Before his speech, White House press secretary Jen Psaki said Biden administration officials always anticipated an “uptick” in violence and greater turmoil as the U.S. withdrawal moved forward. She added that prolonging U.S. military involvement, considering former President Donald Trump had already agreed to withdraw U.S. troops from Afghanistan by May 2021, would have led to an escalation of attacks on American troops.

“The question fundamentally facing him was after 20 years was he going to commit more American troops to a civil war in Afghanistan,” Psaki said.

Biden said it was “highly unlikely” that one government will control Afghanistan after the U.S. pullout, and urged the Afghan government to reach a deal with the Taliban.

The President added that there is no “mission accomplished” moment as the U.S. war comes to an end.

“The mission was accomplished in that we got Osama bin Laden and terrorism is not emanating from that part of the world,” he said.

U.S. forces earlier this week vacated Bagram Airfield — the U.S. epicenter of the conflict to oust the Taliban and hunt down the al-Qaida perpetrators of the 2001 terrorist attacks on the U.S. that triggered the war.

Remaining U.S. troops are now concentrated in Kabul, the capital. The Pentagon said the top U.S. commander in Afghanistan, Gen. Scott Miller, is expected to end his tour of duty later this month as final arrangements are made for a reduced U.S. military mission.

Biden in recent days has bristled at reporters when asked about the drawdown and the security situation in Afghanistan. Asked last week at an event to highlight a strong jobs report whether he was concerned that the Afghan government could fall in a matter of months, he didn’t hide his annoyance.

Biden, answering questions from reporters after his remarks on Thursday, said that Kabul falling to the Taliban would not be an acceptable outcome. But the President also pushed back against the notion that such a scenario was certain.

“Do I trust the Taliban? No,” Biden said. “But I trust the capacity of the Afghan military, who is better trained, better equipped and more competent in terms of conducting war.”

Biden continues to face pressure from congressional lawmakers to offer further detail on how he intends to go about assisting thousands of Afghans who helped the U.S. military as translators, drivers and in other jobs who are now fearful they will be targets of the Taliban once the U.S. withdrawal is complete.

The White House says the administration has identified U.S. facilities outside of the continental United States, as well as third countries, where evacuated Afghans would potentially stay while their visa applications are processed. Biden added that 2,500 Afghans have been granted special immigrant visas since he took office in January.

“Our message to those women and men is clear,” Biden said. “There is a home for you in the United States if you so choose. We will stand with you, just as you stood with us.”