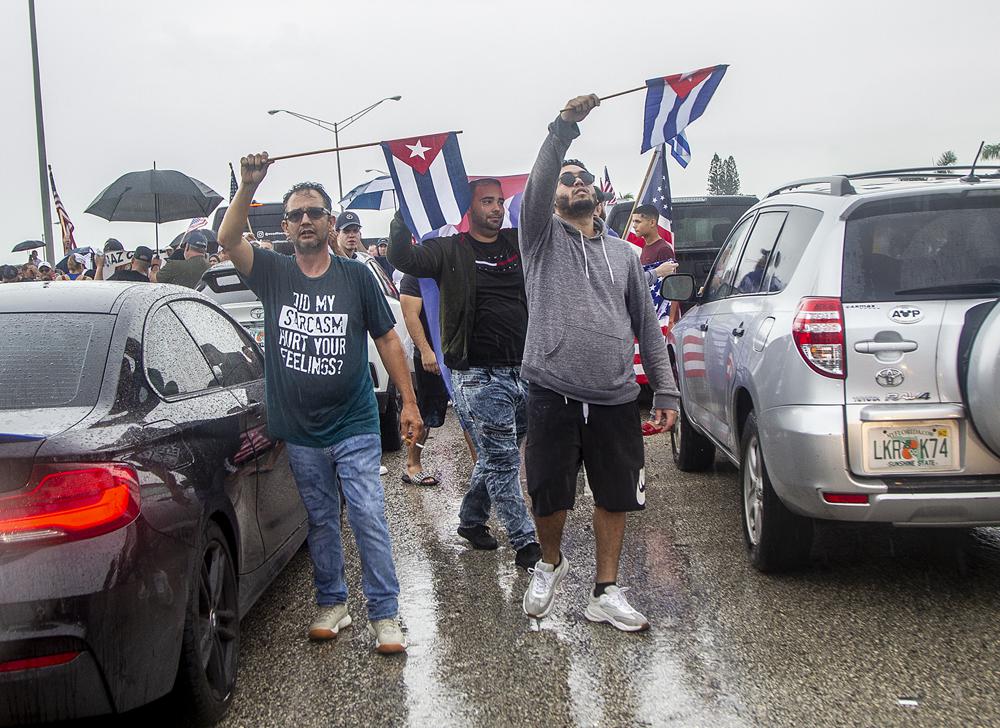 The protests could run afoul of the new anti-riot law.

Demonstrators expressing solidarity with the thousands of Cubans who waged a rare weekend of protests around their island nation shut down a stretch of a major South Florida expressway Tuesday.

The large group gathered at a busy Miami intersection chanting support for the Cubans, who had taken to the streets of several communities around the communist nation Sunday to air grievances about poor economic conditions, among other complaints.

South Florida is home to the largest U.S. population of Cuban Americans.

News helicopter footage from broadcaster WTVJ showed demonstrators marching to Miami’s Palmetto Expressway, where several of them sat down in the roadway. Traffic was eventually blocked in both directions, and police weren’t immediately moving demonstrators.

Elsewhere in Miami, Florida’s Republican Gov. Ron DeSantis held a round table with elected officials, including members of Congress. The gathering at Miami’s American Museum of the Cuban Diaspora was closed to reporters, but the Governor asserted at a news conference later that protests in Cuba were more than just about shortages of vaccines, food and other basic items.

“They are revolting against a corrupt communist dictatorship that has ruled that island with an iron fist for over 60 years, that is responsible for death and destruction, not just on the island of Cuba but really throughout the Western Hemisphere,” DeSantis said.

He said the Cuban demonstrators desire a “a fresh start” and “a free society.”

Nationwide protests last year under the banner of the Black Lives Matter movement drew attention to racial injustice in the U.S. after the killings of Black people by police. Earlier this year, DeSantis signed into Florida law a measure that enhances penalties against protestors who turn violent and brings criminal penalties against those who organize protests that turn violent. DeSantis dismissed similarities between Black Lives Matter and Tuesday’s demonstrators.

“These are people that are rebelling against a communist dictatorship,” the Governor said. He said the demonstrations in Miami were “fundamentally different than what we saw last summer.”

DeSantis, who is said to be considering a run for the White House in 2024, declined to directly respond to how Democratic President Joe Biden’s administration should address the Cuba developments. But he said federal officials should not be satisfied with small Cuban government accommodations designed to quell demonstrations. He also called on Cuba to restore internet service to its populace so they could share their grievances with the world.

Republican U.S. Rep. María Elvira Salazar, whose parents were Cuban exiles, said the community needs to speak with one voice in persuading the Biden administration to stand tough against the Cuban government.

“We cannot negotiate with the regime at this hour,” Salazar said.

Meanwhile, the U.S. Coast Guard in Miami has been monitoring any activity aimed at increasing “unsafe and illegal” crossings between Florida and Cuba in response to rare street protests on the island.

Rear Adm. Eric C. Jones issued a warning statement Monday night as groups of Cuban immigrants said they planned to travel in boats filled with supplies to Cuba to show support for the Cuban protesters.

In Miami, Cuban social media personalities posted Monday that they would make the 10-hour boat ride to Cuba to show support after rare street protests broke out over the weekend, the Miami Herald reported. The influencers said they would bring aid — and guns — and urged people in Miami to offer up their boats.

The group didn’t get very far on a rainy Monday night.

A message posted on organizer Santiago Rivera’s Instagram account early Tuesday said the Coast Guard stopped his group from crossing the Florida Straits because of “problems with firearms.”

Over the weekend, thousands of Cuban Americans gathered in Miami’s Little Havana district, expressing support for the Cubans who joined street marches against high prices and food shortages on the island. Such unsanctioned protests are extremely rare, and Cuban police were out in force on Monday to control them.

The last such demonstrations in Havana took place in 1994. President Miguel Díaz-Canel accusing Cuban Americans of using social media to egg them on.

Miami Mayor Francis Suarez, a Cuban American, tweeted that he has never “felt such raw emotion from the people of Miami desperate for intervention by the government and by themselves on behalf of Cuba.”

Miami wasn’t the only Florida city where demonstrators gathered in support of the Cuban protests. For the second day, Cuban-Americans in Tampa gathered Tuesday at an intersection, blocking traffic and waving Cuban flags. Television images showed a few dozen protesters in a city that traces its Cuban heritage back several generations.