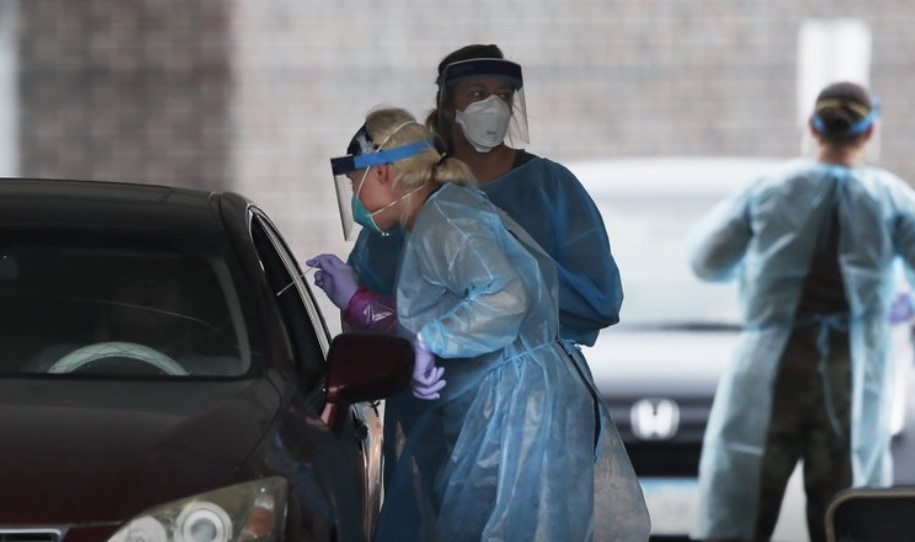 Miami-Dade, which has the highest share of its population vaccinated, is faring better during the recent surge.

South Florida’s COVID-19 case numbers are continuing to spiral upward, with Broward and Palm Beach counties seeing some of the highest case numbers since the post-holiday surge.

Palm Beach’s case positivity rate sat at a whopping 9.6% from July 9-15. That number measures the share of COVID-19 tests coming back positive. That’s the highest week-long number seen in the county since the week of Jan. 6-12. That was more than six months ago and well before vaccines became widely available.

The Centers for Disease Control and Prevention (CDC) is now warning that the spread of the coronavirus has become “a pandemic of the unvaccinated.” Of South Florida’s three major counties, Palm Beach County has the lowest share of its 12-and-older population vaccinated, at 63%. Palm Beach also has the highest case positivity rate over the previous seven days.

Conversely, Miami-Dade has the highest share of its 12-and-up population vaccinated, at 75%. Miami-Dade also has the lowest seven-day case positivity rate of the tri-county area at 7.4%. That’s Miami-Dade’s worst mark since the week of April 12-18.

In the middle sits Broward County, with 67% of those 12 and older vaccinated. Broward is also in the middle in terms of case positivity from July 9-15, sitting at 8.1%. That’s the highest number in Broward since the week of Jan. 23-29.

Case numbers in the region have been rising for weeks. The early spike was not enough to push case numbers anywhere near yearly highs, as cases had plummeted thanks to the region’s vaccine push and continued social distancing measures.

But as life has returned to normal and vaccine rates have dropped, cases have continued to surge and are now returning to pre-vaccine highs in some places.

One positive sign from the previous week is that the vaccine slowdown may be reversing itself. For the first time in weeks, Broward and Palm Beach counties reported a higher number of vaccinations than the previous week. The number of vaccinations still dropped in Miami-Dade week-to-week. But Miami-Dade also has the highest share of individuals already vaccinated, and the recent week-to-week drop was far smaller than it had been in recent week-to-week periods.

The incoming data from South Florida seems to bear out CDC Director Rochelle Walensky’s warning that the pandemic is increasingly concentrated in unvaccinated areas and individuals.

“We are seeing outbreaks of cases in parts of the country that have low unvaccinated coverage because unvaccinated people are at risk,” Walensky said during a virtual news conference Friday.

“Our biggest concern is that we are going to continue to see preventable cases, hospitalizations and sadly deaths among the unvaccinated.”