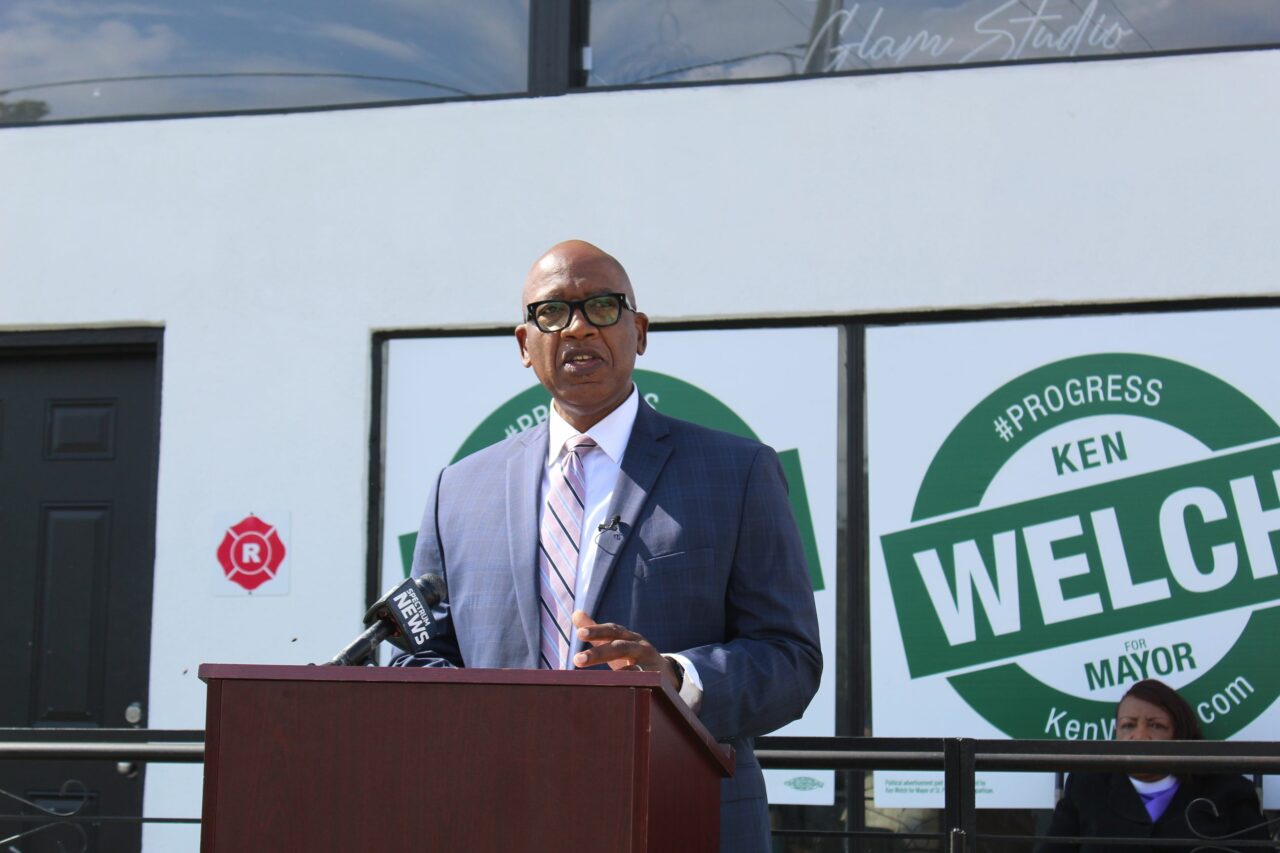 'Ken Welch is not only the man today, but he will be the man tomorrow.'

“Last week, I came to my mailbox, and I saw a brochure slinging mud against Ken Welch. I was outraged. I sat down. I could not take my thoughts off of this for hours,” Pastor Basha P. Jordan said. “Maybe it’s already obvious to our detractors that Ken Welch is not only the man today, but he will be the man tomorrow.”

The mailers, which Rice later responded to, were sent by her affiliated political committee, Friends of Darden Rice. The flyers feature stock images of Black individuals, with statements like “The truth about Ken Welch is that he’s endorsed by Trump supporters and funded by Trump supporters.”

“We don’t get jobs by process of eliminating our competitors. We get jobs based upon our merits,” said Bishop Manuel Skyes of the Bethel Community Baptist Church.

After distributing the mailers, Rice was quickly criticized by Welch supporters for hypocrisy and the imagery — an aspect Rice apologized for in her statement. But, her apology was also something faith leaders honed in on Thursday.

While addressing Rice, the faith leaders and many members of the city’s Black community also highlighted Welch’s experience and the need for diversity in the Mayor’s role, especially while plans are underway to redevelop the Trop site.

“We’ve come too far. There’s too much we have to do. The stakes are too much — oppression of voter rights, HIV/AIDS epidemic, an increase in STDs, jobs, housing, the Tropicana Field development,” Pritchett said. “We’ve got too much at stake to allow cowards, clowns, and cavemen to bring down this candidate.”

“It is an important part of St. Petersburg’s history that the next Mayor close the seam that we have in this city. And I believe there’s no better person than Ken Welch to close that seam,” Skyes said, likely referring to the city’s difficult racial history and its relation to the Trop site. “We’ve watched development by the millions, billions perhaps, downtown. It’s time now to spread the wealth and to spread the opportunity. It’s only right.”

Welch also spoke at the event, saying he will work with faith leaders and invite them to be active partners on new initiatives.

“As Mayor, I will continue to work with our faith community on those important issues. But we need to go further,” Welch said. “I also want to invite the faith community to be active partners on new initiatives designed to bring impactful change to our community. I call these opportunity agendas, including plans for youth, housing, safe and healthy neighborhoods, sustainability and resiliency, and equitable economic development.”

The latest polling shows Welch as the race’s front-runner, followed by Republican City Council member Robert Blackmon. In the Primary, Welch leads with just over 23% support, and Blackmon trails slightly at just under 22%. Rice follows in third.