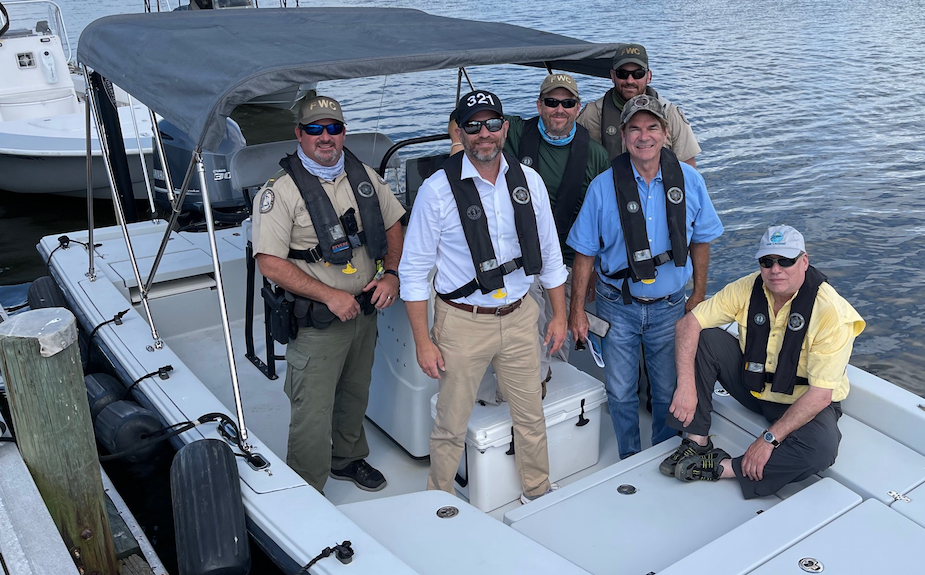 He and Rene Plasencia have troubling observations.

After touring the northern Indian River Lagoon with biologists Thursday, Brevard County Republican Reps. Thad Altman and Rene Plasencia expressed some hope, but also issued dire calls for action to rescue the lagoon and save the manatees that are dying there.

Altman, the veteran lawmaker from Indialantic, has been active in Indian River Lagoon preservation and restoration efforts since he was a Brevard County Commissioner in the 1980s.

What he saw Thursday left him deeply disturbed, after a boat trip with Plasencia and biologists from the Florida Fish and Wildlife Conservation Commission and the St. Johns River Water Management District.

It also made him even more firmly committed to making lagoon restoration — including the St. Johns River system — a top priority for Florida.

The Indian River Lagoon system, running 156 miles from Volusia County through St. Lucie County, is one of the most biodiverse estuaries in North America. But it’s also one of the most-landlocked salt-water systems; it flushes very slowly, meaning there’s not a big flow of fresh seawater coming through. Now it’s deeply troubled, and is this year the center of the worst die off of manatees in recorded history.

“I think the Indian River Lagoon and the St. Johns is going to be our next big environmental challenge,” Altman said Friday. “We’ve done a lot of work in the Everglades, spent billions of dollars. I sponsored the Everglades restoration bill in the House. We’re going to need a similar effort. We’ve done a lot of work on our springs. We need the same type of effort on the St. Johns and the Indian River Lagoon. Now.”

Plasencia, whose district stretches from Orlando to Titusville, was equally determined.

“We need a dedicated funding like the Everglades,” he said.

Altman said what struck him more than anything was the severe degradation of water quality and seagrasses he and Plasencia witnessed Thursday in the Mosquito Lagoon and other parts of the northern-most reaches of the Indian River Lagoon system. It’s the least developed and most protected part of the Indian River Lagoon system, because much of it is surrounded by the Merritt Island National Wildlife Refuge, Canaveral National Seashore, and Kennedy Space Center.

But it’s hurting badly, Altman said. Muck and nutrients are coming in from the south, clouding the water, causing annual algae blooms, and also killing seagrass.

This is where a lot of Florida’s manatees are dying, overwhelmed with already distressed seagrass beds.

“They’re starving to death,” Altman said. “They’ve lost their food source, it’s as simple as that.”

“That’s our state mammal, the manatee. To let that go extinct would be unconscionable,” he added.

Altman, who still has another term and a half available in the House, said he has been working closely with House leadership for commitments to major, longterm recovery efforts.

“This is a multi-year process. It’s not something we can fix in one Session. I think it’s going to take a commitment on behalf of our leadership in the House. I think it’s there,” Altman said. “I think we have a lot of support.”

He and Plasencia also noted some positive signs. Ironically, those were mostly farther to the south, in the more-densely developed Melbourne-Palm Bay area. That’s where much of the restoration efforts have been focused in recent years, with muck removal, septic-to-sewer programs, efforts to curb direct discharges and indirect nutrient runoff, and sewage treatment upgrades.

Altman said some of the water in that area now is clearer than it is in the Titusville area.

Plasencia said biologists noted water in some places is better than it has been in recent years — not as good as it was 30 years ago, but better than two years ago, Plasencia related. That’s a hopeful sign that efforts can work. But, he said, it will take a lot of money.

“People always ask me what we’re doing to help the lagoon … We’re doing a hell of a lot. You can’t see it. And you may not see it for a long time,” Plasencia said.

Altman said the focus needs to be on muck removal and finding ways to help the manatees, including getting them back into historic migratory behaviors away from the northern lagoon, at least until the water is sound enough to sustain seagrasses again. But longterm solutions will require longterm efforts — and research, because a lot of what’s happening remains mysterious, Altman said.

He said the muck removal has been highly effective in restoring water quality in the area of the Eau Gallie River in southern Brevard.

“All of the experts have been saying the single most important thing we can do right now is to get the muck out. Because that’s 60-plus years of deposits since development began. And you can get it out very, very quickly. That’s critical. If we don’t get rid of the muck, it doesn’t fix the lagoon,” Altman said.