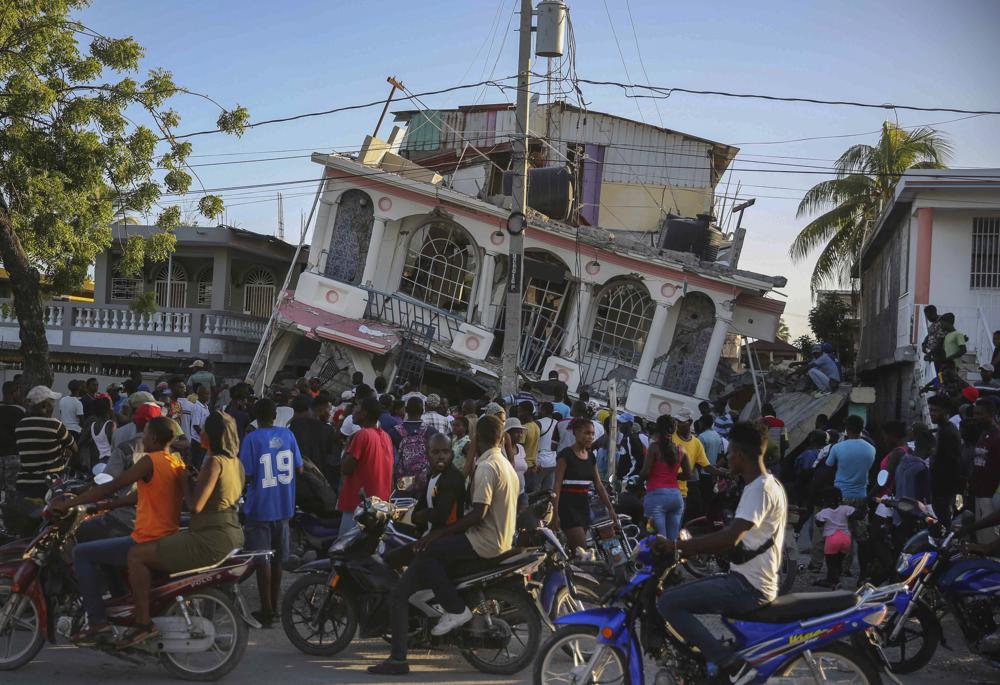 The 7.2 magnitude earthquake hit just over a month after the assassination of Haiti's President.

As the death toll from a devastating earthquake in Haiti climbed to more than 1,400 and a tropical storm loomed closer Monday, elected officials from Miami-Dade County offered emotional and material support to the nation’s anguished citizens.

Haiti, which since 2010 had suffered three other catastrophic earthquakes, was struck by a magnitude 7.2 earthquake Saturday that injured at least 6,000 people and displaced thousands from their homes.

The natural disaster that rocked the island nation of 11 million followed the unsolved July 7 assassination of Haiti President Jovenel Moïse.

Haiti’s civil protection service said Monday evening that most of the deaths so far — 1,133 — were reported in the country’s southern portion about 7.5 miles northeast of Saint-Louis-du-Sud. Another 122 dead were reported in Nippes, as well as 162 in Grand’Anse and two in the northwest.

Shortly after news of the earthquake reached the U.S. mainland, Miami-Dade Mayor Daniella Levine Cava said on Twitter that the county — whose almost 117,000 Haitian residents make it the largest U.S. home to the Haitian diaspora, according to census figures — “stands ready to assist in all the ways we can in the days and weeks ahead.”

Miami-Dade Commissioner Jean Monestime, who was born in Haiti and since 2010 has sponsored most of the county’s Haiti-related legislation, on Monday described the earthquake as “yet another shocking, incomprehensible and tragic chapter” for the country.

“As we await the assessment of the full impact of this horrific event, we pray for the hundreds of families whose loved ones are currently unaccounted for under the rubble,” he said in a statement. “We weep and pray most especially for those Haitian children whose lives over the past 11 years have been so traumatically and painfully filled with emotional scars. Scars that will probably take longer to heal than the country itself. It is our hope that after this natural disaster, the Haitian people find peace at last, and resolve more than ever to leave a more stable republic and steadier ground for the children of Haiti to inherit.”

“I will work alongside him as we wait for a full assessment on what Miami-Dade County can do to help our brothers and sisters in Haiti overcome this terrible tragedy,” he said. “Haiti has endured so much but they are resilient, and together we will help Haiti to get back on its feet.”

Fellow County Commissioner Kionne McGhee, a former Minority Leader in the Florida House, said he would commit resources to assisting people in Haiti.

“We will continue to support efforts related to assisting our brothers and sisters who are in desperate need of aid,” he said. “While we have all bore witness to the strength, courage and resilience of the Haitian people, we must continue to stand with our brothers and sisters in the face of yet another tragedy. As the devastation unfolds, I can assure our Haitian community that I am monitoring the situation closely and pledge my unwavering support in this time of need.”

U.S. Rep. Carlos Giménez, who as Miami-Dade Mayor visited Haiti with Monestime on more than one occasion to meet with Haitian government officials and social service personnel, said Monday that he and his wife, Lourdes, “are praying for the people of Haiti.”

U.S. Rep. Frederica Wilson, whose district includes several densely populated Haitian communities, including North Miami, lamented how Haiti has already sustained “so much devastation this year, and now another earthquake.”

Wilson added: “As always, I stand ready to help and implore others to do so as well.”

“The City of Miami stands with you during this tragic time and we are here to assist in any way,” Suarez wrote online.

Watson, who replaced Miami-Dade Commissioner Keon Hardemon on the Miami Commission, wrote: “For the Haitian diaspora, my heart is with you.”

“(From) the political vacuum to the earthquake recovery to gang violence that controls the highways, the country is going through so much and will need our support,” he said on Twitter.

On Sunday, Rubio paused from tweeting criticism of President Joe Biden’s handling of the Afghanistan withdrawal and urging people, including pregnant women, to get vaccinated to say his office is “reaching out to federal agencies (and) regional partners to see what assistance can be provided.”