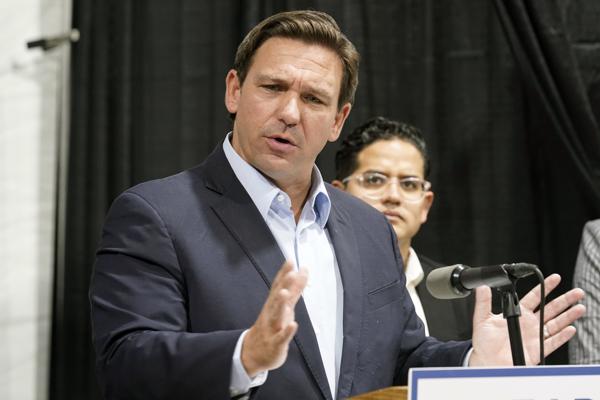 'My philosophy is, as a Governor, my job is to protect your individual freedom.'

Speaking to reporters in Pensacola, the Republican Governor mounted yet another offensive against vaccine passports.

Florida will soon levy a fine on businesses, schools and government agencies that require visitors to show proof of vaccination. The $5,000 fines will begin on Sept. 16.

When asked by a reporter of the rights of business owners, DeSantis portrayed vaccine passports as the foundation of a “biomedical security state.”

“My philosophy is, as a Governor, my job is to protect your individual freedom,” DeSantis said. “My job is not to protect corporate freedom.”

The remarks mark DeSantis’ latest rebuke against the controversial passports.

While other states such as New York have instituted mandatory vaccine policies, DeSantis maintains they are both ideologically and medically fruitless.

“It’s about your health and whether you want that protection or not,” DeSantis said of COVID-19 vaccines. “It really doesn’t impact me or anyone else.”

“I also don’t want two classes of citizens,” DeSantis said. “We have some people in our communities who just made the decision this is something that they’re not going to do. So what? You’re going to write them out of society?

DeSantis, who himself is vaccinated, suggested the passports also make little sense scientifically.

Natural immunity, he asserted, supersedes the immunity a vaccine provides.

“There’s a lot of people who’ve already recovered from COVID who do have immunity,” DeSantis said. “(You’re) actually saying me with the Johnson and Johnson shot can go in, but someone who’s recovered from COVID and probably has stronger immunity, they can’t go in? I’m sorry that is anti-science.”

Though often criticized as underemphasizing the importance of vaccination, DeSantis Friday criticized those willing to undermine personal liberties.

He criticized those who lecture others about the virus and deliver “noble lies.”

“What I try to do is just give the data,” DeSantis said. “I give it honestly. I’m not going to sugarcoat it and I’m not going to tell somebody something that is not true based on the data just because I want them to behave in a certain way.”