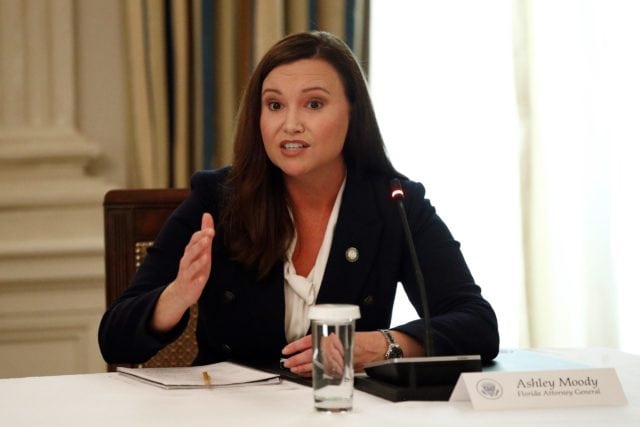 The brief marks the state's latest effort to stamp out vaccine mandates sprouting in cities across state.

With Republicans’ temperaments flaring over vaccine mandates, Attorney General Ashley Moody asked a court Monday to block the city of Gainesville from requiring all city employees to obtain a COVID-19 vaccine as a condition of employment.

In the three page emergency relief document, Moody sides with the plaintiffs — a group of Gainesville city employees — and argues the “unlawful” mandate will aggravate the shortage of law enforcement officers across Florida.

Fewer officers, she warned, may lead to longer responser times, fewer solved crimes and even a “lower quality of life” in impacted areas.

“I want more eligible Floridians to seek out information about the vaccine and make a deliberate, informed decision about their health,” Moody, who is vaccinated, said in a news release. “However, the government forcing compliance by our first responders is wrong.”

The Sunshine State — like many other places — is reckoning with an exodus of law enforcement officers. Nationwide, thousands of law officers have quit, and agencies are struggling to recruit after the murder of George Floyd. Morale is low even among remaining officers, according to a June survey by the Police Executive Research Forum.

In a move to recruit more officers, DeSantis last week unveiled plans to offer a $5,000 signing bonus to new law enforcement officers in Florida. He’s also offering the police certification exam at no-cost to out-of-state cops and plans to create a scholarship to support recruits who need financial backing.

“But as the State seeks to ensure adequate police protection for its citizens, the City of Gainesville is undermining those efforts, threatening to fire police, first responders, and other city employees over the deeply personal decision to get a COVID-19 vaccine,” the brief says. “Forcing police officers out of their jobs is contrary to public safety and is therefore contrary to the public interest.”

The trio, along with others, blasted the mandates as the latest example of government overreach amid the pandemic. DeSantis also touted his battle plan against vaccine mandates.

DeSantis will soon implement fines on businesses, schools and government agencies that require visitors to show proof of vaccination. The $5,000 fines will begin Thursday.

They and their “big government mandates,” he charged, should alarm Floridians.