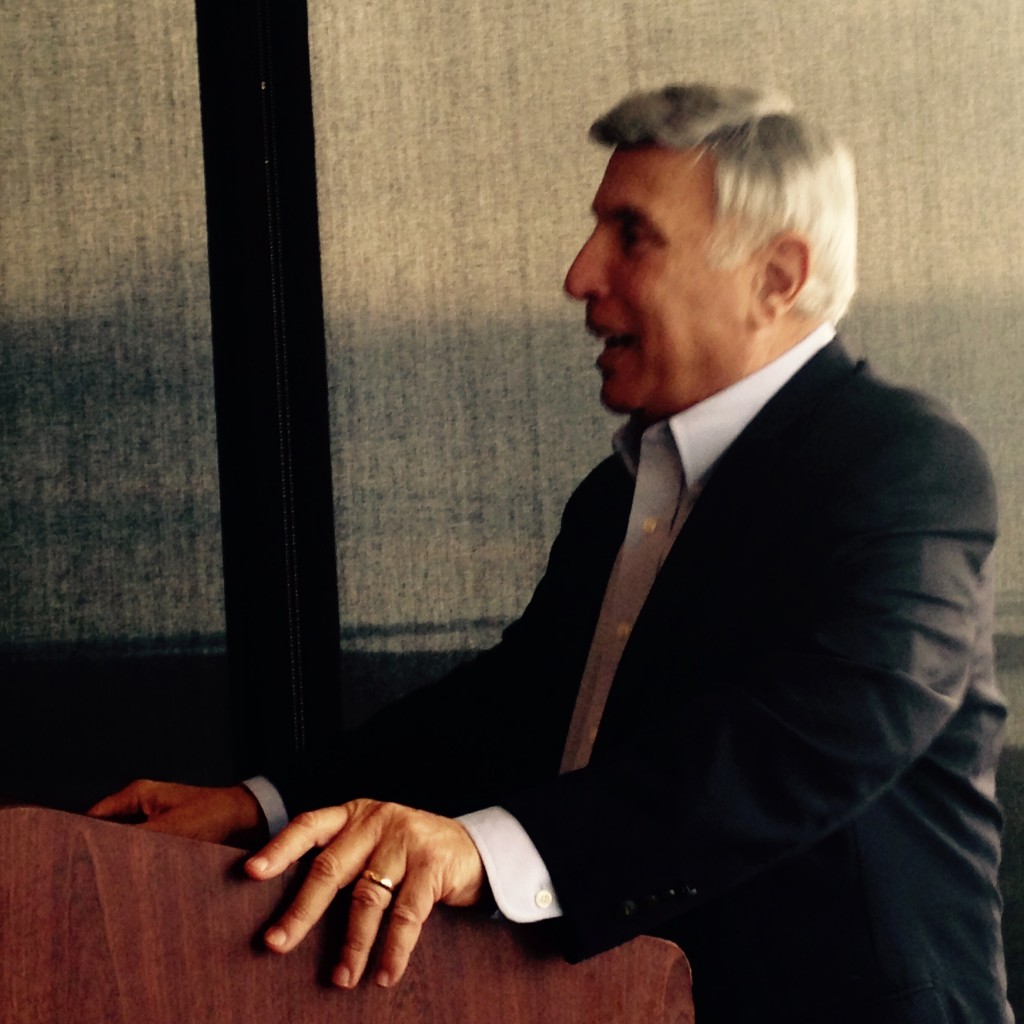 Hazouri was at home, surrounded by family and his passing was peaceful.

A private end to the most public of lives.

In every restaurant, coffee shop or any room, Hazouri held court. The center of the space. Yet in those last years, as he rose to the pinnacle of the City Council, he did it as his body failed him. But even a pandemic and then a lung transplant wouldn’t stop him from what was a consequential presidency, one where Hazouri resisted Mayor Lenny Curry on several issues.

He fought for what he thought was right, to his last breath. We probably won’t see his type again.

It is not to say we won’t see career politicians. But it does speak to the reality of this era of politics, in which politicians of both parties keep gunning for higher office.

But they didn’t seem to enjoy it quite as much as Hazouri.

Every reporter in this town has a Hazouri story or 10, and many considered him a friend. Compare that kind of approach to what we see today, a range of reactions ranging from wariness to hostility, with many candidates presenting as news releases rather than as flesh and blood politicians.

There will never be another Tommy Hazouri. But those who are looking to get into the politics game could learn from his approach.

State Rep. Tracie Davis looks poised to get in the Senate District 6 race at some point, but an opponent with a six-week head start has built himself a financial advantage.

Gaffney is getting some Republican help. Two August donors were former Jacksonville City Council members, Stephen Joost and Greg Anderson. Other primarily GOP donors include message man Michael Munz, former city official and political veteran Mike Weinstein, and Kent Stermon, who may be the person in Northeast Florida most plugged in with Gov. Ron DeSantis.

Yes, Gaffney/Davis would be a Democratic primary. While a Republican is running, though, we have seen Republican money invest heavily in Democratic outcomes. Consider 2016, for example, when Donald Trump’s current political adviser Susie Wiles helped Al Lawson get to know Jacksonville media.

A Gaffney win would push Senate Republicans closer to a functional supermajority on many issues. There is a comfort level Jacksonville Republicans have with him that cannot be ignored either. Expect more GOP play in SD 6.

More strong fundraising, as if there would be any other kind, for Speaker-designate Paul Renner in August. He ended up remarkably close to a million dollars on hand as September began.

Renner’s Conservatives for Principled Leadership committee had a $70,000 August, its best month since February. That account now has over $725,000 to deploy.

Renner’s other political committee, Florida Foundation for Liberty, was also active, with $20,000 in new money and $225,000 on hand.

Renner has $30,000 in his campaign account also, with $17,000 raised in August. Lobbyist Ron Book and lawyers Morgan & Morgan was among the hard money donors.

All told, Renner is nearing a million dollars on hand for his HD 24 reelection bid. He currently is unopposed.

August was a productive month for the fundraising of Rep. Sam Garrison, the Clay County Republican representing HD 18. Between his campaign account and his political committee, the future Speaker raised over $100,000 for the month.

Over $85,000 of that sum went to the p.c. Honest Leadership, with donors ranging from Dosal Tobacco and Surterra Wellness to the AFSCME labor union. The campaign account brought in the remaining $15,000+, with a lot of donations from South Florida.

Democrat Cornelius Jones has also filed to run in the heavily Republican district. Jones has roughly $800 on hand.

Rep. Cord Byrd is not the first person to run for reelection after getting edged out of a campaign for a more critical position, but his absence and declared intentions to run for Senate created a vacuum.

It’s only a matter of time before they fold their tents. Brockwell has raised just over $25,000 in his bid, and enthusiasm isn’t growing with time. Hodges hasn’t raised much, which is his prerogative.

Nevertheless, eventually, they are out.

Byrd will be central to redistricting, as he will chair the State Legislative Redistricting Committee. That is his reward for cleanly dropping his Senate run, but it’s a sign of the gap between a tenured incumbent and would-be challengers.

Byrd was unexceptional as a fundraiser in his Senate bid. But between his campaign account and his political committee, he has well over $100,000 on hand and some goodwill should he need it; that is if his primary challengers don’t just fade out quietly and endorse as they exit.

August mayoral fundraising is in, and the overall picture isn’t changed.

However, one major open question was how the only Democrat who seems close to a 2023 decision would do in her political committee fundraising.

The answer? Not so well.

Donna Deegan‘s political committee Donna for Duval launched in July with just over $113,000. However, August showed momentum did not translate for a second straight month. The committee raised just over $13,000, with $5,000 from Jacksonville trial lawyer Eddie Farah.

What to make of this? One theory is that Carlucci and Deegan are playing in the same lane. And that Deegan isn’t able to tap into the establishment donors who backed her run for Congress in this current field.

September fundraising is definitely worth watching. Another lousy month is terrible news for Deegan’s mayoral hopes.

Jacksonville Democrat Tony Cummings ran for Sheriff eight years ago, and he was an electoral also-ran then. But in 2023, he is again running for the job.

Cummings was one of just two Democrats in 2015. But in 2023, three are running, including Lakesha Burton, the top fundraiser in the race with over $600,000 to spend.

Sheriffs’ races in Jacksonville are full of candidates and deeply polarized, and typically expensive. This one is looking like it will be for sure.

Republican T.K. Waters, the current chief of investigations for JSO, showed strong fundraising of his own in August, suggesting a threshold Cummings will want to meet.

His state-level A Safer Jacksonville for All committee raised nearly $190,000, with J.B. Coxwell and First Coast Energy stroking $50,000 checks. He also raised $115,000 to his campaign account. Waters starts with roughly $300,000, and worth watching going forward is whether he closes the gap with Burton still.

If past is prologue, there will be two elections for Sheriff in 2023. The First Election, in March, sees the top two finishers move to the May General Election unless one candidate wins in March with an outright majority of votes.

A much-anticipated update and upgrade to Jacksonville’s upscale lodging scene is on deck, pending city incentives.

The Jacksonville Daily Record reports introducing legislation to offer $114 million in local help for Shad Khan’s proposed and oft-doubted bid to bring the Four Seasons to the stadium complex.

“The bill commits Khan to a minimum $301,057,548 development. Iguana says the project will have a 176-room Four Seasons with 25 for-sale luxury condominiums, a full-service spa and restaurant, and a 157,027-square-foot, six-story, Class-A office building,” writes the Record’s Mike Mendenhall.

It is yet another project that will be brought to completion in a few years. Hopes are City Council approves it next month and that the project is slated for completion by the end of 2025.

Again, they ranked fourth in the Best Regional Colleges in the South, with a #1 ranking for undergraduate teaching.

“Our No. 1 ranking on the Best in Undergraduate Teaching list, is a testament to the commitment of our faculty to a customized education for each of our students,” said Flagler College Interim President John Delaney. “Flagler faculty are thought leaders in their field and pioneers in teaching; they won’t let students fail.”

Rankings have seen Florida schools excel across the board, and it’s clear that St. Augustine’s Flagler is no exception to that rule.

What went wrong in the Jaguars opening game?

Oh, just about everything.

The Jags were routed 37-21 at Houston, despite being a 3-point favorite going into the game.

They were scorched for 291 yards and two touchdowns by journeyman quarterback Tyrod Taylor. The run defense Jacksonville believed would be stout surrendered 160 yards and a pair of TDs, allowing Houston to have a 10:08 edge in time of possession.

The Jaguars were penalized 10 times for 82 yards. That irked new coach Urban Meyer the most.

“It’s inexcusable,” he said afterward. “Three preseason games, you’d think we’d have that fixed. So that’s something that I would guesstimate you wouldn’t see again.”

Quarterback Trevor Lawrence, playing his first NFL game, threw three touchdown passes (good) but, unfortunately for the Jags, offset that with three interceptions. It was the first time Lawrence had that many interceptions at any level of football.

“I played really bad,” he said.

It doesn’t get any easier.

The Jaguars have their home-opener Sunday at 1 p.m. against a stout Denver team. The Broncos defeated the New York Giants 27-13 on the road in their first game.

Quarterback Teddy Bridgewater threw a pair of touchdown passes in the victory, and Melvin Gordon III rushed for 101 yards, including a 70-yard scoring run.

“I’ve been warned for a long time that this is a marathon, not a sprint,” Meyer said. “Calm down, relax, not relax but onward, soldier. Let’s go back to work on Monday. We’re still a work in progress.”