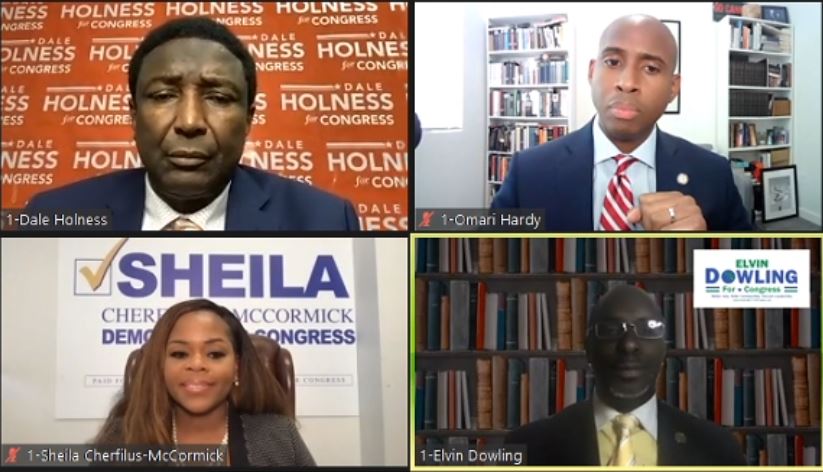 Candidates are vying to replace the late Alcee Hastings.

At part one of a CD 20 candidate forum Wednesday, candidates tackled a range of hot topics, including expanding the Supreme Court, support for universal basic income, and whether to mandate COVID-19 vaccines.

When We All Vote Palm Beach County hosted the forum. The 10 candidates who attended Wednesday were split up into two groups, taking questions from lawyers Yolanda Cash Jackson and Nicholas Johnson, who served as moderators.

All four Democrats agreed COVID-19 vaccines should be mandatory, and they support President Joe Biden’s recent push to force companies to require vaccinations for workers, or implement weekly testing.

“It is essential for us to stay healthy and for our economy to continue to grow,” Holness said.

“As the Mayor of Broward County at the height of COVID, I was able to bring the community together to ensure that we communicated to the public how important it was for them to follow the guidelines that were set.”

Gov. Ron DeSantis and many other Republicans have resisted vaccine mandates, with DeSantis signing a bill banning so-called “vaccine passports.” But Hardy argued delaying those mandates is what’s caused polarization within the vaccine debate.

“We should never have treated this vaccine any differently than we’ve treated any other FDA-approved vaccine for other communicable diseases,” Hardy argued. “So the fact that we took this long really allowed the space in the discourse to allow vaccines to become politicized.”

Elsewhere in the debate, Dowling gave his take on another hot topic among progressives: expanding the Supreme Court. Some have proposed plans that would depoliticize the court by implementing term limits. But when asked whether he thought the number of justices should be increased, Dowling outright called for Democrats in Congress and Biden to expand the court.

“I believe the Supreme Court should be expanded. We’re living in a time in our country where the Court has been weaponized against Black folks, Brown folks, women and all kinds of minorities, and we have to do something about it,” Dowling said.

He admitted uncertainty when it came to how that expansion would best take shape, however.

“I believe that the Senate ought to give the President the option to appoint as many justices as are necessary to right what is clearly a wrong ship. How that comes about, I do not know. What all the answers are, I cannot say,” Dowling said. “But I will say that I do believe that something needs to be done and I would support that measure.”

Cherfilus-McCormick, who has made a push for universal basic income a centerpiece of her campaign, returned to that topic when discussing the main problems facing CD 20 constituents.

“What I’ve been proposing are economic stimulus checks of $1,000.”

She argued additional child tax credit dollars would not be sufficient, as that cash would fail to reach struggling individuals without children.

“That leaves 50% of our district out of economic recovery,” Cherfilus-McCormick said. “We need to have equitable justice when it comes to getting economic stimulus checks.”

Hardy also had harsh words for Republicans when asked to discuss a ruling that blocked, at least for now, the GOP-led anti-riot bill approved by the Legislature last Session. While Republicans argued the bill was targeted to crack down on violent protests, District Judge Mark Walker said the bill posed serious First Amendment concerns.

Asked whether there’s any middle ground to be reached in the Florida Legislature on the issue, Hardy took aim at Republicans.

“President (George W.) Bush used to say that we don’t negotiate with terrorists. I believe that we should not be compromising with Republicans on our constitutional freedoms,” Hardy said.

“It was not only an unintelligent piece of legislation for them to put forward, but it was fundamentally un-American and thankfully that judge ruled that it was unconstitutional. So the answer is no, there’s no compromise on our constitutional rights.”

Moderators asked Holness how he would deal with divisions in the Black community, if elected. CD 20 spans Broward and Palm Beach counties, crossing several majority-Black areas near major cities such as Fort Lauderdale and West Palm Beach.

“When you focus on moving the community forward, sometimes what you find is there’s pushback. And you must do everything you can to bring people together, but you cannot compromise on the fight for the people that you represent,” Holness said.

“I am there for listening, for working together and I’ve done that — demonstrated that clearly — through my leadership at the Broward Black Elected Officials.”

The candidates were also asked to name the number one issue CD 20 residents are dealing with. Dowling said voting rights was a major focus, pointing to a lawsuit he filed to push DeSantis to schedule a Special Election in CD 20.

“A vote-less people is a hopeless people,” Dowling said. “And if we don’t have the franchise to be able to exercise, to be able to even have an election, for example, then what are we doing?”

The other three broadly focused on economic concerns.

“We have, in this district, some of the highest unemployment rates, high poverty rate, low home ownership rate, which leads to desperate outcomes,” Holness said.

“We have so many families that, even if they’re able to keep a roof over their head, they’re spending well over a third — in some cases well over half — of their income just trying to keep that housing,” Hardy said.

“Housing is a leg up to the middle class for folks. If you can’t afford a home, you’re not going to be able to generate wealth for yourself and for your children and your grandchildren.”

Cherfilus-McCormick said jobs would be a priority.

“My biggest thing that I’m trying to push for is creating jobs and supporting small businesses,” Cherfilus-McCormick said. “In the last year, we’ve created over 1,200 jobs,” she added, referring to her own company.

Hastings was also a focus of Wednesday night’s discussion. He passed away earlier this year following a cancer battle. Candidates took turns arguing they’d be his best successor.

“The one thing about Alcee is that although he was, in some respects, one of a kind, he was from a generation like John Lewis and Elijah Cummings where they weren’t afraid of getting into good trouble,” Hardy said. “And so I’m running to represent this community and to be a troublemaker for justice on behalf of working families in District 20.”

Added Dowling, “One of the great things that Congressman Alcee Hastings did was he served at a local level, making sure that there was a federal presence on local issues. That’s what I’d like to do.”

But Holness argued he was truly Hastings’ candidate-of-choice.

“Congressman Alcee Hastings thought I was the best person to replace him. He endorsed me prior to his passing. His son Jody has stood with me to ensure the world knows that,” Holness said.

Hastings did not speak publicly regarding a successor, though Holness garnered support from Hastings’ family.

The Democratic Primary is scheduled for Nov. 2.