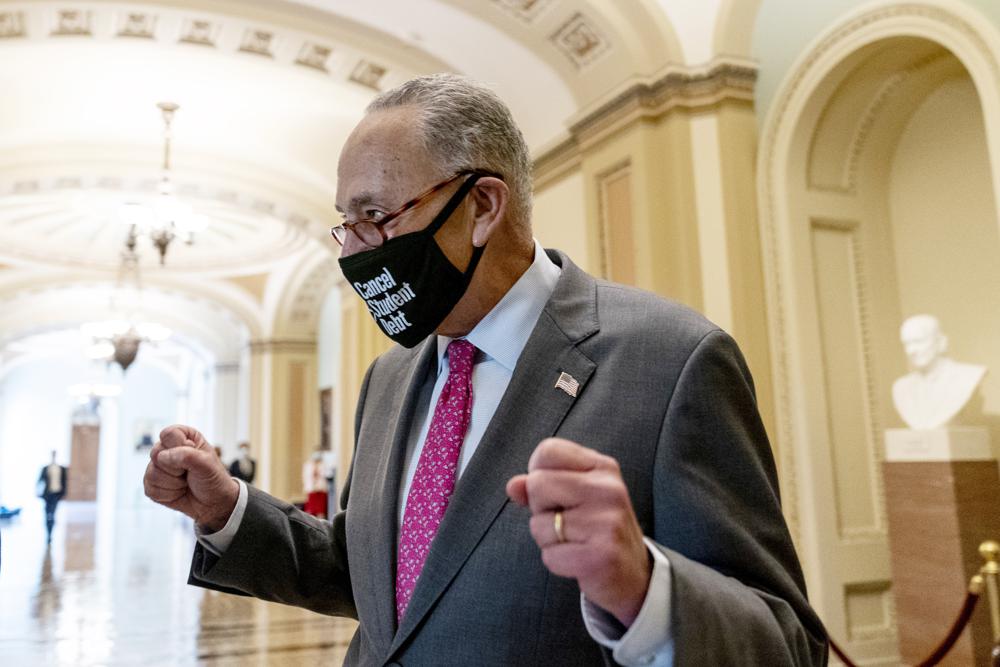 Littlecan be expected to pass in the 50-50 Senate.

Democrats can’t use their $3.5 trillion package bolstering social and climate programs for their plan to give millions of immigrants a chance to become citizens, the Senate’s parliamentarian said, a crushing blow to what was the party’s clearest pathway in years to attaining that long-sought goal.

The decision by Elizabeth MacDonough, the Senate’s nonpartisan interpreter of its often enigmatic rules, is a damaging and disheartening setback for President Joe Biden, congressional Democrats and their allies in the pro-immigration and progressive communities. Though they said they’d offer her fresh alternatives, MacDonough’s stance badly wounds their hopes of unilaterally enacting — over Republican opposition — changes letting several categories of immigrants gain permanent residence and possibly citizenship.

The parliamentarian opinion that emerged Sunday is crucial because it means the immigration provisions could not be included in an immense $3.5 trillion measure that’s been shielded from GOP filibusters. Left vulnerable to those bill-killing delays, which require 60 Senate votes to defuse, the immigration language has virtually no chance in the 50-50 Senate.

In a three-page memo to senators obtained by The Associated Press, MacDonough noted that under Senate rules, provisions are not allowed in such bills if their budget effect is “merely incidental” to their overall policy impact.

Citing sweeping changes that Democrats would make in immigrants’ lives, MacDonough, a one-time immigration attorney, said the language “is by any standard a broad, new immigration policy.”

Estimates vary because many people can be in more than one category, but the nonpartisan Congressional Budget Office says 8 million people would be helped by the Democratic effort, MacDonough said. Biden had originally proposed a broader drive that would have affected 11 million immigrants.

Democrats and their pro-immigration allies have said they will offer alternative approaches to MacDonough that would open a doorway to permanent status to at least some immigrants.

“We are deeply disappointed in this decision but the fight to provide lawful status for immigrants in budget reconciliation continues,” Senate Majority Leader Chuck Schumer, a New York Democrat, said in a written statement. “Senate Democrats have prepared alternate proposals and will be holding additional meetings with the Senate parliamentarian in the coming days.”

“A path to permanent residency and citizenship has a significant budgetary impact, great bipartisan support, and above all it is critical to America’s recovery,” said Kerri Talbot, deputy director of the Immigration Hub, a group of pro-immigration strategists. She said work would continue “to ensure that millions of undocumented immigrants can have lasting protections.”

The parliamentarian’s ruling was riling progressives at a time when Democratic leaders will need virtually every vote in Congress from their party to approve a 10-year, $3.5 trillion bill that embodies Biden’s top domestic goals.

It also comes with Republicans already signaling that they will use immigration, linking it to some voters’ fears of crime, as a top issue in next year’s campaigns for control of the House and Senate. The issue has gained attention in a year when huge numbers of immigrants have been encountered trying to cross the Southwest border.

“Democratic leaders refused to resist their progressive base and stand up for the rule of law, even though our border has never been less secure,” said Senate Minority Leader Mitch McConnell, a Kentucky Republican. He said putting the provisions into filibuster-protected budget measure was “inappropriate and I’m glad it failed.”

In fact, both parties have stretched the use of the special budget protections over the years. Democrats used them to enact President Barack Obama’s 2010 health care law, and Republicans used them during their failed 2017 drive to repeal that statute.

“It would have led to an increased run on the border — beyond the chaos we already have there today,” said the Senate Budget Committee’s top Republican, South Carolina Sen. Lindsey Graham.

One alternative advocates have said they’re exploring would be to update a “registry” date that allows some immigrants in the U.S. by that time to become permanent residents if they meet certain conditions. But it was unclear if they would pursue that option or how the parliamentarian would rule.

MacDonough cited a CBO estimate that Democrats’ proposals would increase federal deficits by $140 billion over the coming decade. That is largely because of federal benefits the immigrants would qualify for.

But that fiscal impact, wrote MacDonough, was overshadowed by improvements the Democratic effort would make for immigrants’ lives.

“Many undocumented persons live and work in the shadows of our society out of fear of deportation,” she said. Permanent legal status would grant them “freedom to work, freedom to travel, freedom to live openly in our society in any state in the nation, and to reunite with their families and it would make them eligible, in time, to apply for citizenship — things for which there is no federal fiscal equivalent.”

That, she wrote, “is tremendous and enduring policy change that dwarfs its budgetary impact.”

Democrats and a handful of GOP allies have made halting progress during the past two decades toward legislation that would help millions of immigrants gain permanent legal status in the U.S. Ultimately, they’ve been thwarted each time by broad Republican opposition.

The House has approved separate bills this year achieving much of that, but the measures have gone nowhere in the Senate because of Republican filibusters.

The overall $3.5 trillion bill would boost spending for social safety net, environment and other programs and largely finance the initiatives with tax increases on the rich and corporations.

Progressive and moderate Democrats are battling over the measure’s price tag and details. Party leaders can’t lose any Democratic votes in the 50-50 Senate and can lose no more than three in the House.

MacDonough was appointed in 2012 when Democrats controlled the chamber and is respected as an even-handed arbiter of Senate rules.

Earlier this year, one of her rulings forced Democrats to remove a minimum wage increase from a COVID-19 relief bill, killing another top progressive priority.

Republished with ermission of The Associated press.