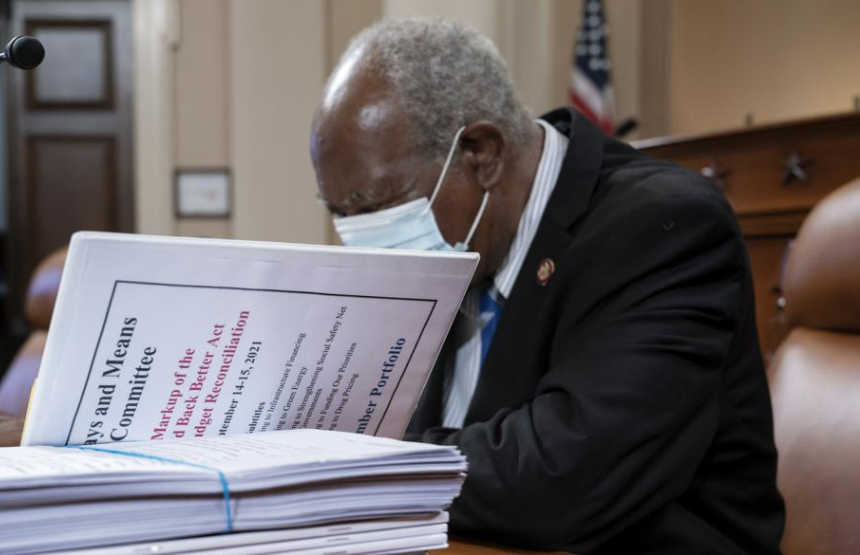 Big budget bill billed as 'build back better' or 'Trojan horse of socialism.'

What will it cost to enact President Joe Biden’s massive expansion of social programs?

Congress has authorized spending up to $3.5 trillion over a decade, but Biden is prodding Democrats to fully cover the cost of the legislation — by raising taxes on corporations and the wealthy, negotiating the price of prescription drugs, and dialing up other sources of federal revenue such as increased IRS funding.

The idea is that the entire package should pay for itself.

Defending a bill not yet fully drafted, Democrats are determined to avoid a deficit-financed spending spree. They are growing frustrated by the focus on the proposed $3.5 trillion spending total, arguing far too little attention is being paid to the work they are doing to balance the books. Biden on Friday said he would prefer the price tag described as “zero.”

“We pay for everything we spend,” Biden said at the White House. “It’s going to be zero. Zero.”

But the revenue side of the equation is vexing, and it’s emerged as a core challenge for Democratic bargainers as they labor to construct one of the largest legislative efforts in a generation. Their success or failure could help determine whether the bulk of Biden’s agenda becomes law and can withstand the political attacks to come.

Republicans, lockstep in opposition, aren’t waiting for the details. They’ve trained their focus on the $3.5 trillion spending ceiling set by Democrats, pillorying that sum as fiscally reckless, misguided, big government at its worst.

“The radical left is pushing in all their chips — they want to use this terrible but temporary pandemic as a Trojan horse for permanent socialism,” Senate Republican leader Mitch McConnell of Kentucky said Thursday. “Trillions upon trillions more in government spending when families are already facing inflation.”

Part of the problem for Democratic leaders is the lack of a consensus about which programs to fund and for how long. House Speaker Nancy Pelosi and Senate Majority Leader Chuck Schumer acknowledge the price will likely come down and say they have a “menu” of revenue raisers to pay for it. But without certainty on what initiatives will be included, no final decisions can be made.

“This is not about price tag,” Pelosi said Thursday. “This is about what’s in the bill.”

Biden and administration officials stress the plan is as much about fairness as dollars and cents. By taxing the wealthy and corporations, they hope to fund paid family leave and child tax credits that help those reaching for the middle class, all while adopting environmental and economic policies that help the U.S. compete with China. But the haggling over a final spending target is overshadowing the policy goals they are trying to achieve.

Washington Rep. Pramila Jayapal, a lead negotiator for House progressives, said Friday that reporters should not depict the measure as costing trillions of dollars when the accompanying proposed tax increases would cover the cost.

“I just believe that this is going to be a zero-dollar bill — that’s the No. 1 priority,” she said.

Sharron Parrott, president of the Center on Budget and Policy Priorities, a liberal think tank based in Washington, warned Democrats that emphasizing the $3.5 trillion figure could detract from what they are trying to achieve.

“The debate so far has been overly focused on a single number: the $3.5 trillion in gross new investments over the next 10 years — including both spending increases and tax cuts — that may be included in the package,” Parrott wrote in an August blog post. “True fiscal stewardship requires a focus on the net cost of the package and, even more fundamentally, a focus on the merits of the investment and offset proposals themselves.”

What Biden is really pushing are two goals that can easily come into conflict. He wants to restore the middle class to the epicenter of economic growth, but do so without worsening the national debt or raising taxes on people earning less than $400,000 a year.

Further complicating things is that many of his spending policies are actually tax cuts for the poor and middle class, which means he is raising taxes for one group in order to cut them for another.

Democrats also have to contend with how the measures are assessed by the Congressional Budget Office, the final arbiter of how the legislation will affect the federal balance sheet.

The Democrats’ expanded child credit and dependent care credits, enacted earlier this year, are counted as costs in a CBO score. Biden wants to extend these programs as part of the budget, which he is now arguing amounts to one of the largest middle-class tax cuts in U.S. history.

It’s not entirely clear whether Biden’s claim of “zero” cost is feasible under the 10-year outlook used by the CBO to assess the economic impacts of legislation. Biden’s own budget officials earlier this year estimated that his agenda would increase the national debt by nearly $1.4 trillion over the decade.

Biden on Friday described the multitiered talks with legislators as at a “stalemate.” More meetings are expected in the coming days.

In the evenly split Senate, key Democratic senators such as West Virginia’s Joe Manchin and Arizona’s Kyrsten Sinema have qualms about the total spending. Democratic moderates are jockeying for advantage against their liberal counterparts. With time running short, Biden is asking for more patience to get the numbers right so that the votes will follow.

“This is a process,” he said. “But it’s just gonna take some time.”