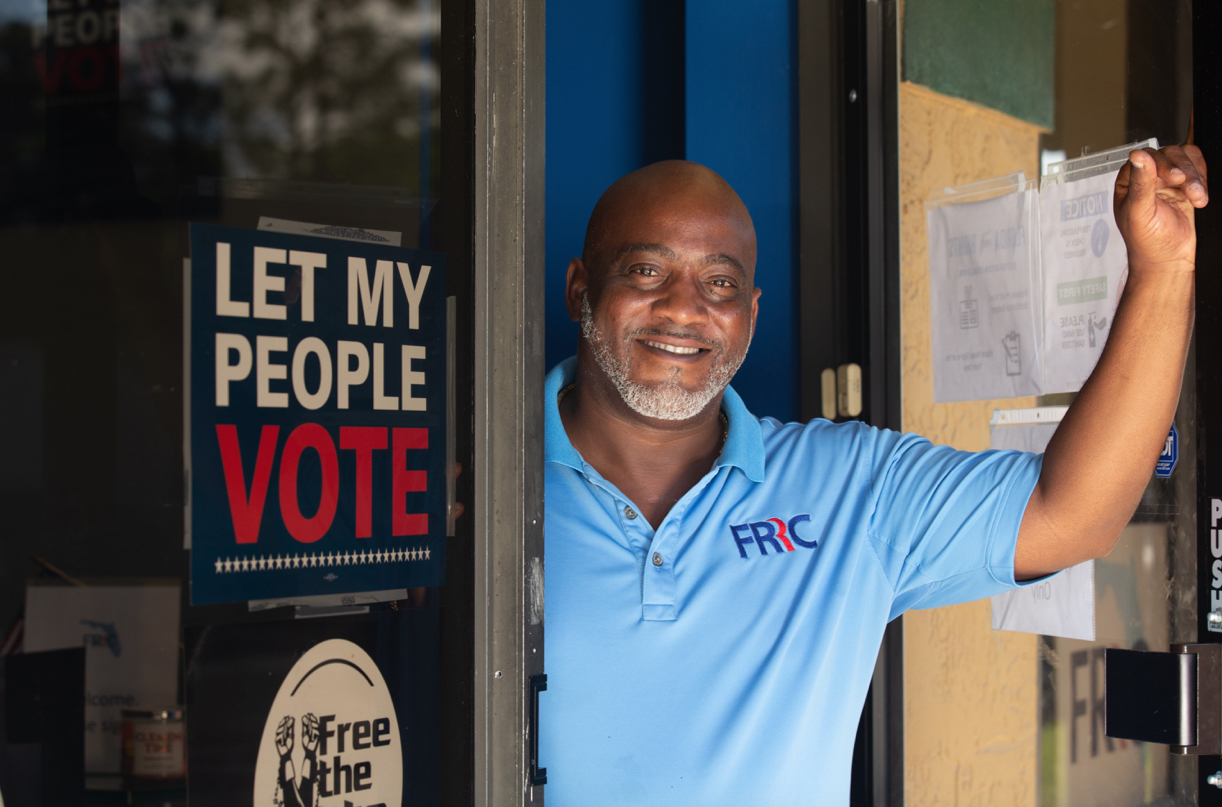 Meade isn't the only returning citizen to receive the honor.

Civil rights activist Desmond Meade — the face and driving force behind efforts to force Florida to restore voting rights to felons — has been named a 2021 MacArthur Fellow.

The honor from the John D. and Catherine T. MacArthur Foundation of Chicago is awarded to “extraordinarily talented and creative individuals” throughout the country who show “promise for important future advances based on a track record of significant accomplishments,” and who show the “potential for the fellowship to facilitate subsequent creative work.”

Each fellowship comes with a no-strings-attached $625,000 “genius grant.”

“This is huge,” said Meade, who is founder, president, and executive director of the Florida Rights Restoration Coalition.

Meade, of Orlando, led a grassroots effort for many years that culminated in 2018 with statewide passage of Amendment 4 to the Florida Constitution, restoring voting rights for as many as 1.4 million Florida felons such as himself, though his rights are still being withheld.

In March, as the Florida Phoenix reported at the time, Gov. Ron DeSantis for the second time denied a pardon for Meade, saying it was because of Meade’s dishonorable discharge from the U.S. Army. DeSantis said Meade could go through the regular process to apply to have his civil rights restored. On the same day, DeSantis and the Cabinet, sitting as the Clemency Board, adopted an “automatic process” to speed up the restoration of rights for felons who have completed all terms of their sentence, including paying fines and fees. The move also eliminated the five-year waiting period before felons can apply for restoration.

Meade is not the only felon — he prefers the term returning citizen — to win. His friend Reginald Dwayne Betts, a poet and lawyer from New Haven, Connecticut, also won, for his work promoting humanity and rights for people who are or have been incarcerated.

What’s more, art historian and curator Nicole Fleetwood of New York City won for her efforts to reveal and showcase artwork done by and about incarcerated people.

Meade said the fellowships demonstrate the potential in anyone who might have been struggling at some time.

“I think this is an amazing opportunity for two types of folks, for folks to see people who may be going through things in life — whether it’s homelessness or addictions or incarceration — how, even though they may not see a light at the end of the tunnel, they know that they can not only overcome these obstacles, but they can have an impact on their community,” Meade said.

“And then, just as important, if not more, it’s for everyone else to see that when you have that question on the application that makes it hard for people with felony convictions to find employment, it’s like denying me a job. Or when they have housing practices that discriminate against people with criminal history, that’s like denying me housing,” he said. “It’s an example that there are so many people out there just given an opportunity to have a career, to have affordable housing, to get an education, to get that opportunity, that they’re going to be a stellar contributor to society.”

He said he will use some of the prize money to pay off his law school loans, but he also will be looking for ways to use it for his work helping other returning citizens. Last year he won the Puffin Foundation’s Puffin Prize for Creative Citizenship, which comes with a $100,000 grant. He put most of that up as matching grants for the coalition’s “fines and fees” fund to pay court-ordered costs necessary for Florida’s felons to win back their voting rights. With that contribution, he said the coalition raised more than $200,000.

So, he said, he’ll be looking for creative ways like that to expand his message.

Meade was selected to a class of 25 fellows, which also includes scientists, artists, writers, historians, economists, and film makers, among others.

“As we emerge from the shadows of the past two years, this class of 25 Fellows helps us reimagine what’s possible,” MacArthur Fellows Managing Director Cecilia Conrad said in announcing the recipients. “They demonstrate that creativity has no boundaries. It happens in all fields of endeavor, among the relatively young and more seasoned, in Iowa and Puerto Rico.”

nextSunburn — The morning read of what’s hot in Florida politics — 9.29.21