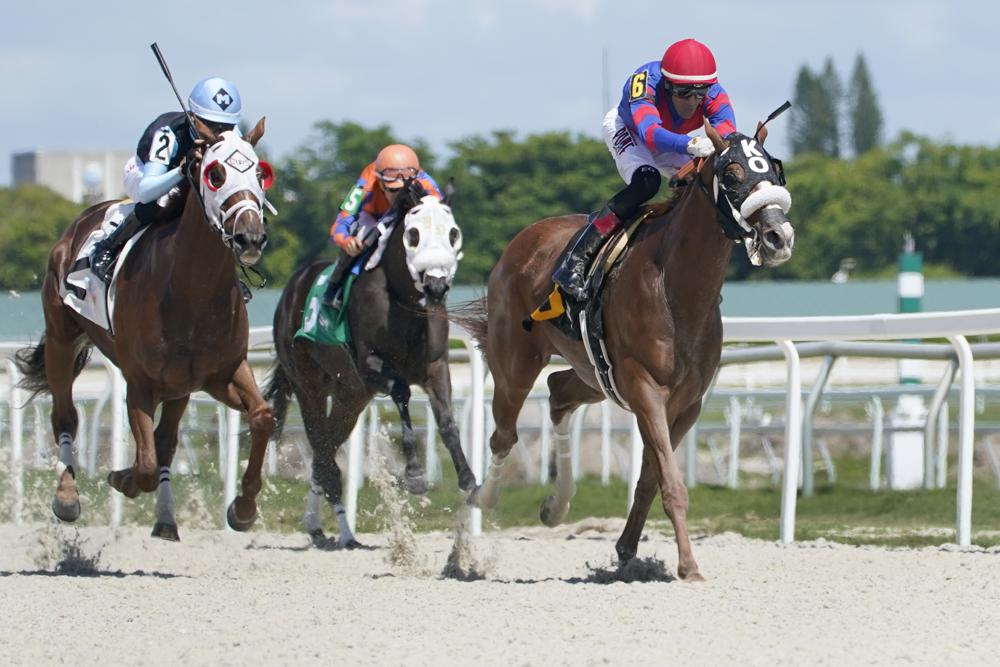 Gulfstream’s new racing surface made its debut Thursday, and with that the South Florida track becomes the first in the U.S. to offer races on traditional dirt and turf courses as well as an all-weather synthetic option.

The new track surface is called Tapeta, a blend of fine sand and wax-covered rubber fibers, designed to simulate the root structure of turf. It’s been proven to handle extreme heat and heavy rain — both are part of life at Gulfstream — and will give the track’s turf course needed breaks each year for repairs.

“I’ll tell you, they did a really good job,” said jockey Edwin Gonzalez, who was aboard Emoji Guy for the first win on the new surface, speaking afterward with tiny flecks of the track stuck to his face, goggles and helmet.

Other tracks in the U.S. offer Tapeta, but Gulfstream is the first to have a synthetic course alongside the dirt and turf ovals.

“I think it’s a good added track to have, especially in the summer when it rains a lot,” said trainer Saffie Joseph Jr., who was the leading conditioner by a wide margin at Gulfstream’s recently completed spring-summer meet. “If you have a turf horse, some of them just can’t run on the dirt. This is going to allow you to run most of them — although not all of them like it.”

Tapeta will give trainers an option on wet days, when it isn’t safe or advisable to run on the turf course. When a race is moved from artificial grass to dirt, many horses wind up not running. The plan now at Gulfstream would be to move races from grass to Tapeta on those wet days, which would likely minimize the rate of scratches.

“It means a lot,” trainer Kathleen O’Connell said after winning Gulfstream’s Tapeta debut. “It’s a new track record. Of course, it was the first race run on it.”

The safety element is one of the reasons Gulfstream added the surface. Other benefits of running on Tapeta will include being able to give the turf course a long break each year and not running as often over the dirt surface.

“This is beautiful,” jockey Chantal Sutherland said after one of the first training sessions. “The horse went over it effortlessly. It was super-soft, and you could not hear horses beside you making any noise on it. My horse, I couldn’t hear hitting the ground. They’ve done a great job on it. It seemed all level and really soft, very forgiving for horses.”

Gulfstream will play host to more racing days going forward than usual, now that what was called Gulfstream Park West — formerly Calder Race Course — is closed, running its final race in November 2020. Racing had been held at the Gulfstream West track for about two months annually in recent years, giving the Hallandale Beach facility a lengthy break before its Championship Meet starts each December.