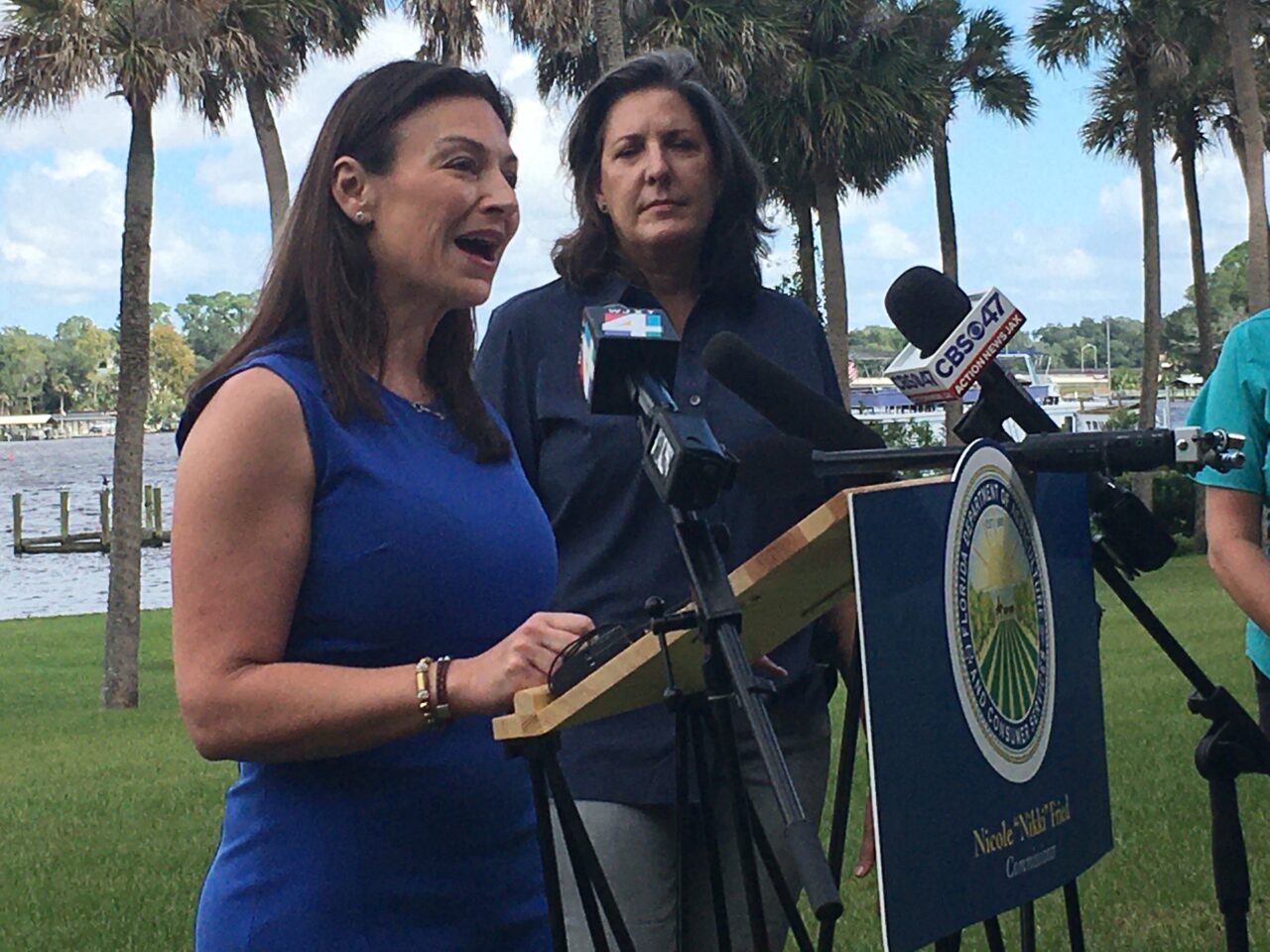 No elected Duval County Democrats showed for the press conference.

Algae blooms have plagued the St. Johns River in Jacksonville this autumn, and one state official has finally taken notice.

On Tuesday, Agriculture Commissioner Nikki Fried visited the Empire Point neighborhood on Jacksonville’s Southside, one of several locations where the blooms have been particularly bad in recent weeks on the St. Johns River.

The blooms had receded from view by Tuesday afternoon, but the Commissioner addressed the issue anyway.

Fried contextualized the algae problem as an example of one of “multiple water crises” in the state, decrying “partisan politics” in her comments.

“Unfortunately, efforts to protect our environment have gotten caught up in partisan politics and finger pointing,” Fried lamented, before launching into extended prepared remarks about her department’s  Clean Water Initiative.

Fried described an activist department, willing to take action “for the first time ever” against polluters, and creating “accountability and transparency” in water programs and far beyond.

“We have come a long way” in making “landmark changes,” Fried said.

Fried was accompanied by local stakeholders, including St. Johns Riverkeeper Lisa Rinaman and Lisa King, a Riverkeeper board member who once chaired the Duval Democratic Party. However, absent from the event were any of the city’s Democratic elected officials, whether state legislators or members of the Jacksonville City Council.

Meanwhile, some of those Democrats have shown up at U.S. Rep. Charlie Crist events in Jacksonville. On Thursday, both Sen. Audrey Gibson and City Council member Reggie Gaffney, a candidate to replace Gibson, are expected at an 8:30 A.M. meet and greet.

When asked why Democrats weren’t on hand, Fried deflected, saying the event was in her “official capacity” and that she hopes “all people” back clean water initiatives.

However, that didn’t address the question of them showing up or that others were backing Crist.

“Listen,” Fried said, “I get to work. I get things accomplished. And that’s what my focus is on.”

Fried’s time in office is running out, also. She is running for Governor in 2022, and Senate President Wilton Simpson, a Republican candidate for his party’s nomination for her current job, is well-positioned to take back the Agriculture Commissioner role from whomever the Democrats eventually nominate.

“We are creating a legacy for our environment,” Fried said. “And I would hope that anybody who gets elected after me, whether Democrat, Republican, or independent, would understand the importance.”

“We don’t have time to put a pause on these issues,” Fried continued. “Our waters are in crisis. Our health system is in crisis because of this and our economy is in crisis. So I would hope, and I would challenge anybody who is going to be stepping into the Commissioner role, that you have an obligation to continue some of these changes.”

“And if you don’t live up to those expectations, the people of the state of Florida will demand it,” Fried added.

Fried’s path to the Democratic gubernatorial nomination is clearly uphill. Endorsers have gone with Crist statewide as well as in Northeast Florida.

Meanwhile, Fried is struggling to fundraise compared to the current Governor. She had roughly $3 million on hand as of the end of September, comparable to Crist’s $2.8 million. Either sum is roughly half of the $5.6 million raised by Gov. Ron DeSantis‘ political committee in just September alone.

previousDelegation for 10.12.21: Indigenous People — to the House — Taiwan — cliff jump — game on

nextFlorida, national school board associations at odds over federal call for protection