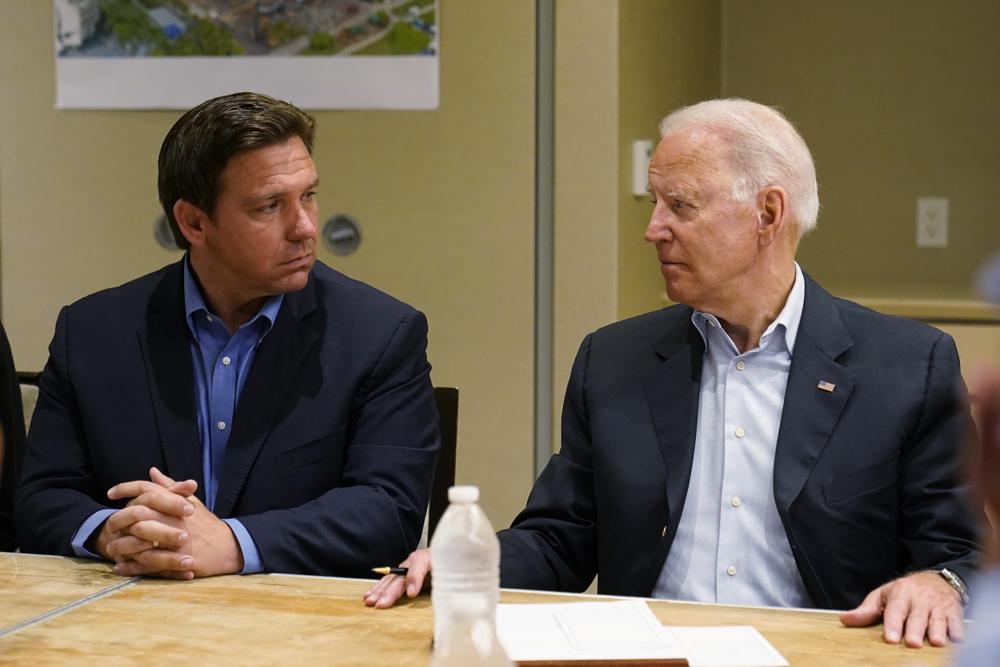 A poll shows Florida voters have a more favorable view Gov. Ron DeSantis than of President Joe Biden. But Republicans here still want former President Donald Trump as their nominee for President in 2024.

And regardless, Biden tops Trump or DeSantis in a hypothetical head-to-head race for President in Florida. But DeSantis could take Vice President Kamala Harris, the poll showed.

The poll from Naples-based Victory Insights took a look at how Florida’s voters feel about their own Governor and the other prominent choices for President. But it found there’s not necessarily a correlation between whether voters think a candidate is doing their job well and whether they want that candidate holding the highest office in the land.

Biden would win the Sunshine State with 51% to Trump’s 49%, the poll shows, and he would beat DeSantis by a similar margin. Harris would more narrowly defeat Trump but still come out with roughly the same percentage of the vote. But DeSantis could defeat Harris with 51% to her 49%. The poll has a 4.5% margin of error.

“Florida has taken the spotlight as a swing state turned (marginally) red state, and if DeSantis is the Republican nominee, it could prove crucial to his victory or defeat,” reads a polling memo.

Curiously, the poll finds DeSantis is popular here, regardless of how voters view his chances as a presidential candidate.

Yet, when pollsters looked at what leader Florida voters wanted leading the ticket in 2024, there was a definite break.

Among Republicans, 58% want Trump as the GOP nominee and for the ex-President to attempt a comeback to the White House, while just 30% want DeSantis as nominee. Florida’s Governor did stand out as the clear Trump alternative should the former President decide on a quiet Mar-a-Lago retiree life. Only 12% of voters polled preferred any choice besides Trump or DeSantis.

By comparison, about 60% of Florida Democrats want Biden to seek a second term, compared to 17% who prefer Harris lead the ticket and 23% who want another candidate.

The poll also measured “favorability intensity” for the four candidates and found DeSantis with the edge there. Looking at voters in the wider voting pool, pollsters calculate a favorability intensity of 76% for DeSantis, compared to 70% for Biden, 67% for Harris and 66% for Trump.

Looking only at internal party support, DeSantis polls even better, with an 86% intensity among Republicans compared to 78% for Trump. Among Democrats, Biden enjoyed a 76% intensity and Harris a 73% level.

“First, DeSantis has fervent supporters, evidenced by the fact that he leads in both in-party (+5%) and overall (+6%) favorability intensity,” a memo states. “Second, Trump’s appeal is much stronger within the Republican Party than it is across party lines.”

At the same time, all the candidates also scored high in terms of “hated intensity,” or those who grade the candidates very unfavorably. Trump holds an 86% negative intensity among Democrats and an 85% rating overall, making him the most hated in the field no matter how much Republicans love him. Similarly, Harris has an 85% hated intensity among Republicans and an 81% overall.

DeSantis isn’t so reviled as Trump or Harris, but there’s more disdain for him in Florida than for Biden. The Governor holds an 83% negative intensity with Democrats and an 80% among all voters. Meanwhile, Biden comes in with 79% with all voters and 82% among Republicans.