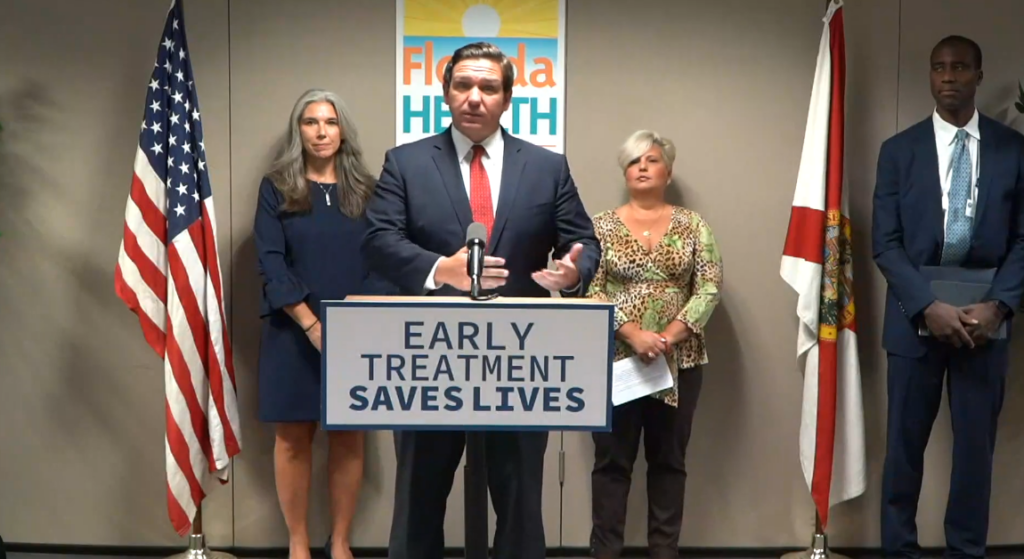 'In Florida, it shall not stand.'

Gov. Ron DeSantis is considering asking the Legislature to allow employees to sue bosses who require them to be vaccinated against COVID-19 and to remove the state’s litigation shield from businesses that require them of workers and customers.

“If a business forces somebody to do this then that employee, if there’s anything that happens negative as a result of that coercion, you know, they should be able to go in and then sue and get compensation, get damages for that,” the governor said during a news conference Thursday in Fort Myers.

“We worked very hard in Florida to provide protections against COVID liability for businesses, because we worried about people just going in and starting to sue, to say, ‘Hey, I was in your business and I caught COVID, therefore it’s your fault.’ That’s just not the way respiratory viruses work. We’ve just never done it that way.

“So, we provided good protection. But, you know, businesses turn around and now they’re imposing mandates. Then that protection, to me, is something that we would probably want to peel back from those businesses,” DeSantis said.

The liability protection bill was the first out of the 2021 Legislature that DeSantis signed into law. It protects businesses, including medical providers, against claims that they exposed workers or customers to the coronavirus. He described it at the time as key to reopening the state’s economy following the stay-home order he signed early in the pandemic.

Separate legislation that the Governor signed on May 3 forbids local governments and businesses from requiring “vaccine passports,” or documentation that people have been vaccinated, as a condition of providing services, on pain of fines of $5,000 per violation.

Thus far, the administration has identified around 120 businesses, big and small, and local governments that it may seek penalties against under the law, according to the Department of Health.

DeSantis offered the remarks while highlighting the efficacy of monoclonal antibody therapy in preventing serious COVID-19 symptoms and death. Flanked by state Surgeon General Joseph Ladapo, the Governor argued that vaccines mandates are misguided because the shots are no guarantee against infection and may not be necessary for people who acquire resistance through infections.

“It doesn’t mean there’s not value in it, but forcing this in, like, a workplace — it doesn’t mean that you’re still not going to see infections. I think they’ll be mild infections, hopefully, and, if they’re not we have monoclonal antibodies where you can come and, hopefully, nip it in the bud then,” he said.

Here’s what the U.S. Centers for Disease Control and Prevention says:

“COVID-19 vaccines are effective and are a critical tool to bring the pandemic under control; however, no vaccine is 100 percent effective at preventing illness. Some fully vaccinated people will get sick, and some will even be hospitalized or die from COVID-19. However, there is evidence that vaccination may make illness less severe for those who are vaccinated and still get sick. The risk of infection, hospitalization, and death are all much lower in vaccinated people compared to unvaccinated.”

DeSantis has vowed to resist President Joe Biden’s plan to require companies with more than 100 workers to force them to take the shots. According to an Associated Press report, the Occupational Safety and Health Administration submitted the regulation to the Office of Management and Budget for review on Tuesday. The agency has 90 days to review the matter; Biden has encouraged businesses to comply voluntarily in the meantime.

The president has issued similar orders to federal contractors and workers at nursing homes that receive federal health care funds.

“We are going to contest that immediately,” DeSantis said of the Biden vaccine mandate, adding that he may recruit businesses to participate in a legal challenge.

He predicted the mandates would cause shortages among key workers including nurses.

“I am offended that, like, a police officer could potentially lose their job. They were not given the ability to work from home. They didn’t get to Zoom in to protect us. Ain’t gonna work to protect the public on Zoom,” he said.

“In Florida, it shall not stand,” DeSantis said.

“Does the federal government have this authority? Clearly, Congress has never enacted a statute to this effect, so this is a unilateral executive action. Does that trump the ability of individuals to make their own choices or the ability of states to be able to provide protections for people and for their jobs?”

Although every President since George Washington has issued executive orders, according to an American Bar Association summary, their legitimacy has been highly contested in recent years. They offer presidents a way around Congress’ refusal or inability to act on a policy priority but political opponents have been known to argue specific orders are overly broad. Congress retains authority to override these orders if it chooses. (Read more here.)

According to the National Constitution Center in Philadelphia, for example, “One of the first ‘orders’ of business for President Donald Trump was signing an executive order to weaken Obamacare, while Republicans figure out how to replace it. So what powers do executive orders have?”

Via Michael Moline of Florida Phoenix.