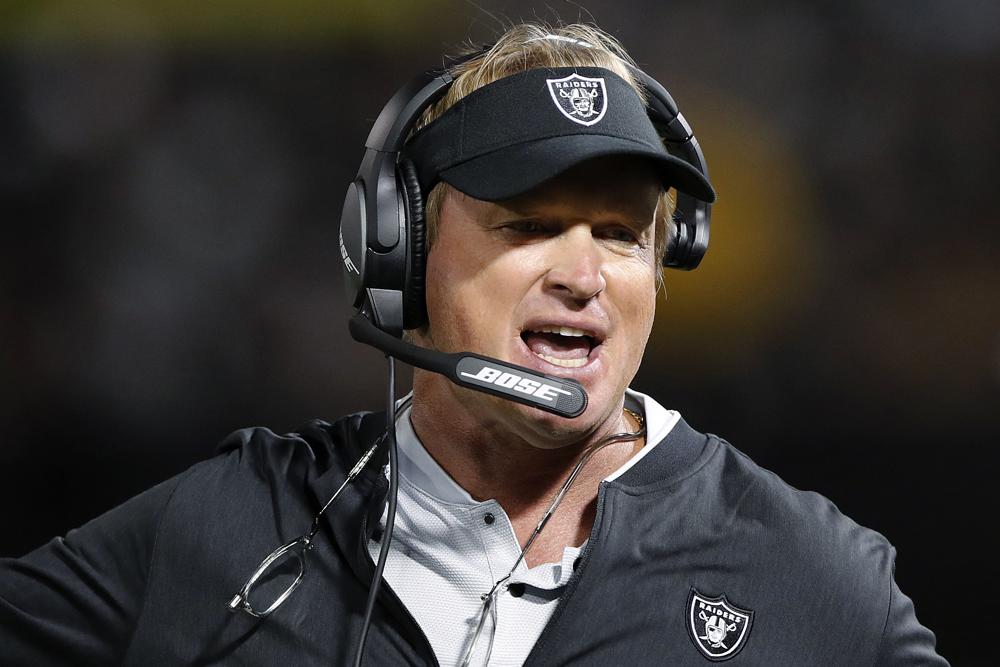 The NFL can’t be expected to solve all of society’s ills, of course, but it can do a much better job of ensuring its own house is in order.

Surely the racism and misogyny and homophobia weren’t a Jon Gruden exclusive.

But the NFL, instead of thoroughly addressing what is likely just the tip of a very toxic iceberg, hopes we’ll all just meekly accept Grudengate as the end of it.

Nothing more to see here.

We’re expected to go along with the ludicrous notion that a yearlong probe into the Washington Football Team wasn’t worthy of issuing an actual report or deserves any further examination, even though we’ve now learned another team’s disgraced coach memorialized in emails all the horrible things that were swirling around in his head. (Not to mention, we got a couple of juicy tidbits about an ESPN reporter and the NFL’s top lawyer getting a little too cozy with the team’s ex-president.)

No doubt, it cuts a much wider, more embarrassing path than that, but the NFL seems intent on protecting one of its own — reviled WFT owner Dan Snyder — and keeping its “investigation” firmly sealed before anyone it really cares about is implicated.

Seahawks linebacker Bobby Wagner, for one, knows the Gruden emails exposed a greater problem than one rogue coach — and stretches far beyond the NFL, for that matter.

“There are people out there like that, that speak that way, that have that mindset, that have not grown,” Wagner said. “It’s not something that shocks me anymore because you get it in so many different fields. It’s not just football.”

The NFL can’t be expected to solve all of society’s ills, of course, but it can do a much better job of ensuring its own house is in order.

Come to think about it, if the league actually cared about anything more than making billions of dollars and protecting its image, it would have ordered a far-reaching investigation to determine how prevalent this abhorrent behavior is within all 32 franchises.

Instead, it’s gone into cover-up mode, banking on its enormous popularity to sweep this issue away like so many others that came before, from concussions to Colin Kaepernick.

It never even issued a public report into its investigation of the Washington Football Team, and apparently has no plans to do so.

In the end, Gruden took the fall — a slap in the face to the 40 former Washington employees who bravely came forward with allegations of sexual harassment and bullying in the workplace extending all the way to the owner’s box.

They are rightfully incensed that the NFL is unwilling to reveal a more complete picture of what they went through, though the leaked emails that cost Gruden his job as coach of the Las Vegas Raiders certainly give a grim sampling.

“In response to a yearlong investigation in which more than 100 witnesses were interviewed, and which we believe substantiated our clients’ allegations of pervasive harassment, misogyny and abuse at the Washington Football Team, the NFL has chosen to protect owner Dan Snyder,” the former Washington employees’ attorneys, Lisa Banks and Debra Katz, said in a statement.

“This is truly outrageous.”

Back in July, the NFL wrapped up its investigation by fining Washington $10 million, which for the owner of a franchise worth an estimated $4.2 billion is roughly equivalent to the loose change he finds in his sofa on any given day.

Snyder wasn’t even suspended, agreeing instead to turn over the supposed day-to-day operation of the franchise to his wife. Oh, and he also was allowed to buy out his minority partners, coming out on the other side of the scandal stronger than ever.

The NFL clearly didn’t want this going any farther than Snyder’s slap on the wrist.

After all, this is a league that already has some very troubling racial issues — from its blackballing of Kaepernick over his social justice protests to the alarming lack of Black head coaches in a league where roughly 70% of players have that skin color.

This season, only three of the 32 head coaches are Black.

The Gruden emails — and whatever else the NFL’s investigation uncovered — should have led to an honest, necessary reckoning with the sort of workplace culture that apparently gave him no pause about firing off such vile sentiments — and resulted in no apparent pushback from those on the receiving end of his missives.

(Does the NFL, for instance, plan any retroactive action against Bruce Allen, if for no other reason than to prevent him from slinking back into the league?)

The NFL would prefer that it all go away, and likely will get its way unless those who help feed the cash cow decide to exert some of their considerable influence.

Remember, the only reason Washington dropped its former nickname was due to financial pressure from its biggest sponsors.

A group of former team employees are calling on corporate giants Verizon, Anheuser-Busch, Amazon, Pepsi, Nike and Procter & Gamble to demand transparency from the league over this scandal.

That’s probably the only chance we’ll ever get to the bottom of it all.

We won’t hold our breath waiting.

In the meantime, let’s give the last word to Wagner.

“We have a long way to go,” the Seahawks stars said. “That (Gruden) situation is not anything bigger than what the world is dealing with and what the world should be focusing on and trying to figure out. There’s a lot of things that we could figure out that are a lot deeper than just this conversation.”