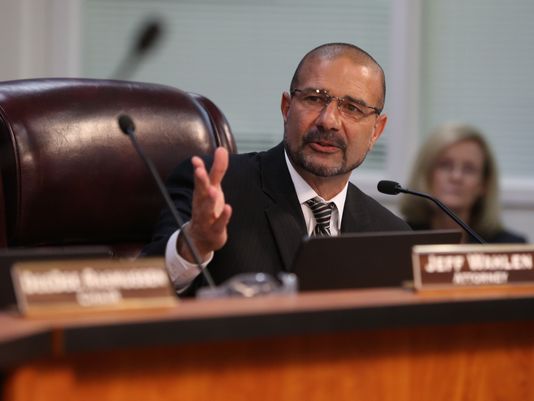 'We at the end of the day are going to continue what we've done from the very beginning, follow the data, follow the numbers to make informed decisions.'

The Education Department is moving forward with sanctions against the Leon County School Board for flouting the state’s ban on mask mandates.

In a letter sent Friday to Superintendent Rocky Hanna and Board Chair Georgia Bowen, Florida Education Commissioner Richard Corcoran notified them that DOE would withhold Board members’ pay for violating school masking rules.

The Leon County School Board is not in compliance with Health Department emergency rules from Surgeon General Joseph Ladapo barring school districts from requiring students to wear masks without allowing parents to opt their children out of that policy.

The School Board took a half step to fall back within compliance by eliminating the requirement that a doctor clear students from wearing masks. However, the District’s masking rules include a mask mandate for unvaccinated, asymptomatic students for seven days after they are exposed to the COVID-19 virus.

“While the district has a policy that allows a parent or legal guardian of a student to opt the student out of wearing a face covering or mask at the parent or legal guardian’s sole discretion, your letter states that this policy does not apply when an asymptomatic student returns to a district during the seven-day quarantine period. During this period, your policy states that a student must wear a mask while indoors, ‘regardless of medical or parental opt-out,'” Corcoran wrote.

DOE will withhold from the school district an amount equivalent to a month of board members’ pay.

Hanna defended the Board’s position Friday in an interview with WTXL’s Veronika Vernachio.

“We at the end of the day are going to continue what we’ve done from the very beginning, follow the data, follow the numbers to make informed decisions, not simply to make a rash political statement that we are never going to require masks again or we cannot have the autonomy or the home rule to decide what’s best for the children here in Tallahassee and Leon County,” Hanna said.

The State Board of Education last week gave the School Board 48 hours to comply with the emergency rules or face sanctions, but sanctions weren’t finalized till Friday after the School Board and DOE exchanged letters on the matter throughout the week.

Previously, the Board of Education found that Alachua and Broward county school districts were violating masking rules ordered by the former Surgeon General, Scott Rivkees. DOE already withheld funds from those districts, starting a showdown with the federal government after it backfilled school board members’ pay. The Education Department doubled down last week, withholding funds equivalent to the federal grants they received.

Florida’s masking policies have come at the direction of Gov. Ron DeSantis, whose executive order forbidding mask mandates faces multiple court challenges. The Republican Governor also pushed for the sanctions against school districts, which so far have amounted to $500,000 combined for Alachua and Broward counties.

“Rocky Hanna needs to stop playing politics and follow the rule set by the State,” he tweeted Friday.

Leon County has already been in the DeSantis administration’s crosshairs this week. On Tuesday, the Health Department fined the county $3.6 million for violating the state vaccine passport ban. DOH found 714 instances, each fined at $5,000, in which it said the county violated the ban on vaccine requirements.

County Administrator Vince Long, who called the move political, has hinted at upcoming legal action over the vaccine rules.

nextImagine what else lurks in those 650,000 NFL emails