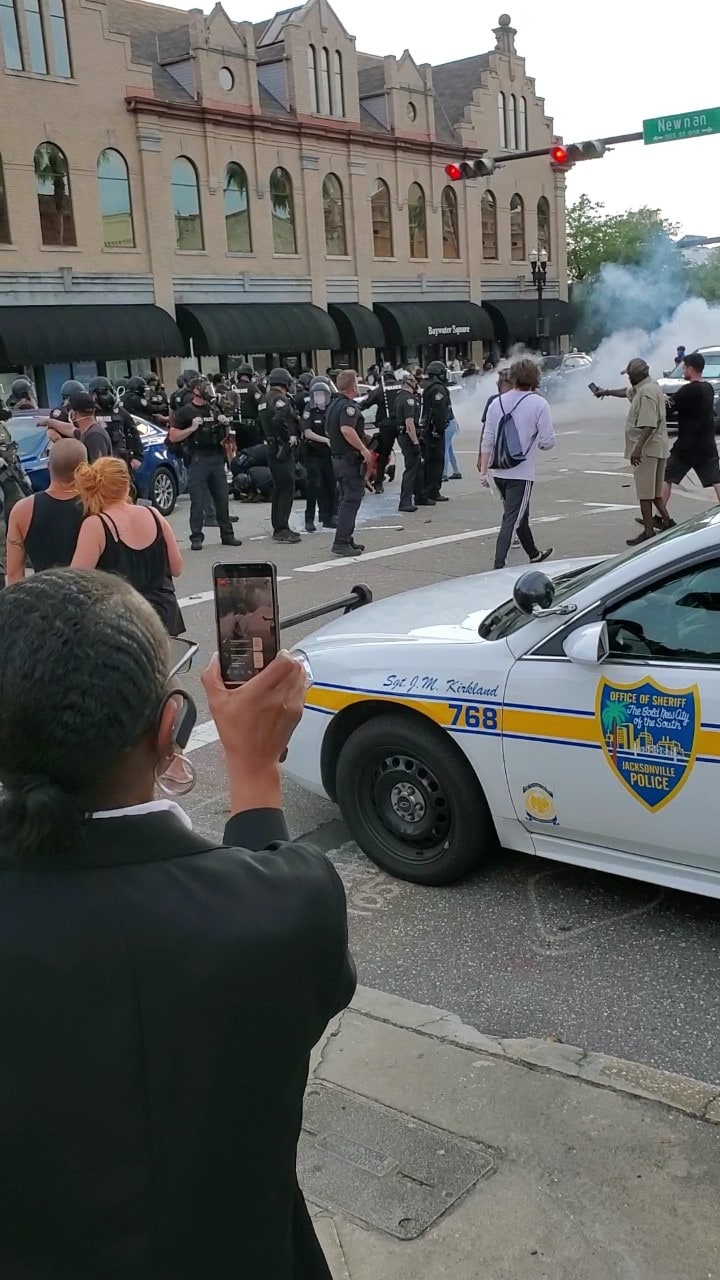 'This is about maintaining control of communities.'

In a scene evoking the courtroom comedy, “My Cousin Vinny,” Miami-Dade Commissioner Keon Hardemon used a tape measure Tuesday to demonstrate the 30-foot distance from police Floridians would have to remain or risk arrest if a new bill moving through the Florida Legislature passes.

Starting at the front of the dais, Hardemon moved back in six-foot increments — the longest the tape measure would go — until he was in the second row of audience seating in the Commission Chambers.

“This distance is further than the distance of being at your front porch and an officer at your sidewalk,” said Hardemon, a former public defender now in private criminal defense practice. “This distance is not about … the intent to strike or harm an officer. This is about maintaining control of communities. Because an officer is never going to tell you at this distance, ‘Back up. You’re too close.’”

The legislation in question, House Bill 11, was the first bill filed for the 2022 Legislative Session. Its sponsor, Republican Rep. Alex Rizo of Hialeah, filed an identical bill for consideration last Session. That bill died in the House Criminal Justice and Public Safety Committee. Its refiled version is now in the same committee.

The bill would criminalize approaching a police officer with the intent to disrupt the officer’s duties after being warned to remain at a distance. The person also be in violation if they approached an officer to harass or provoke a physical response.

The offense would apply to those approaching or remaining within 30 feet of an officer after receiving a warning. Violators would be subject to arrest and charged with a second-degree misdemeanor punishable by a $500 fine or up to 60 days in prison.

Proponents of the bill, like Miami-Dade Commissioner Joe Martinez, a former lieutenant with the county police department, said the 30-foot distance is for the safety of the officer. Twenty-one feet is the distance in which police officers, if they expect a threat, can respond to someone running up on them with a knife.

“If you’re not ready for it, you need more time,” he said. “It might look like a lot, but unless you’re on the receiving end like I was, it’s not.”

Diaz described the bill as a “tool” police could use to better protect themselves and the space around them. That may not have been necessary years ago, but police-citizen interactions have grown much more hostile and, as such, new rules are needed.

“To antagonize police officers or antagonize people in general, that is wrong,” he said. “That is something we’re seeing now. We’ve never seen that before — people calling them names, saying things about their family members, trying to draw the person out to be aggressive in return. This is not what society is about, and I’ve only seen that now… That’s a new trend, and this is part of dealing with that trend.”

Sosa agreed, pointing to slain Hollywood police officer Yandy Chirino as someone whom the law could have helped.

But HB 11 would not have helped Chirino, who was fatally shot Sunday night while answering a call about a suspicious person trying to break into cars and homes in the city’s Emerald Hills neighborhood, said Hardemon, whose mother and several family member are or were in law enforcement.

What the bill could do, he continued, is worsen already tense situations by creating an invisible barrier police could enforce to their liking, regardless of how passive those within its radius behave.

He pointed to an August incident on Miami Beach in which five Miami Beach police officers were caught on camera roughing up a man suspected of injuring another officer and tackling and punching a bystander recording the arrest on his cellphone.

“We’ve seen on Miami Beach how they’ve used their laws to harass people who are visitors. An officer is going to approach you and say, ‘Back up. You’re too close. Back up. You’re too close. You’re too close,’ before they put their hands on you,” he said. “We should give our law enforcement the tools that it needs to succeed, but this is not a tool to be used to succeed in law enforcement. This is a tool for them to fall into a trap, for them to be accused of abusing their authority and for us to be sued in Miami-Dade County.”

Hardemon said: “This is not good legislation.”

Gilbert, a former prosecutor, said he appreciated “the spirit” of HB 11 but argued it is redundant because obstructing officers in the lawful exercise of their duty is already a misdemeanor.

The bill is also “really, really vague” with regard to what constituted harassment, he said, pointing to a line prohibiting people from “directly or indirectly” harassing a law enforcement officer.

“I don’t know what indirect harassment is. Is it someone filming you with a phone?” he asked. “Oftentimes, in an effort to solve a problem or to address an issue, we tend to overreach, and we criminalize things that ought not to be criminalized. I think that people have a right to stand and watch and do whatever it is they’re going to do as long as they’re not stopping that officer from doing their job.”

“This is basically a bill to kill camera pixels,” he said. “I also see this as creating an arrest factory.”