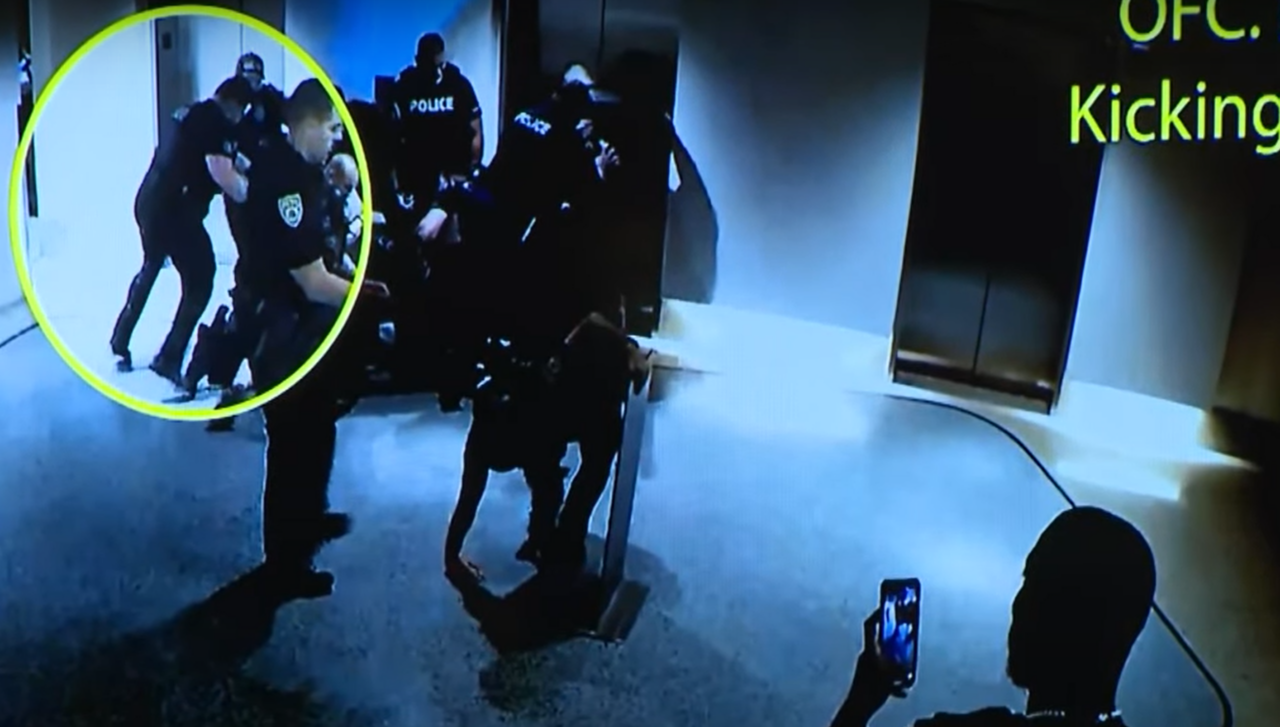 Five Miami Beach police officers face battery charges after being accused of roughing up a man suspected of injuring another officer in a hit-and-run incident and tackling and punching the bystander who recorded the man’s arrest last week.

“Police officers face a variety of dangers on the job each and every day … however, as I’ve previously said, excessive force can never, ever be an acceptable foundation for the policing of any community,” Fernandez Rundle said. “Officers who forget that fact do a grave disservice to the people they have sworn to serve. They harm their own departments, and they belittle the good and hard work that each of their fellow officers tries to accomplish in the community.”

Much of the evidence off of which Fernandez Rundle’s office is working comes from police body cameras and video taken from the lobby of the hotel where the incident took place early July 26. WPLG Channel 10 first reported on the incident shortly after.

That morning, 24-year-old Dalonta Crudup was suspected of striking a Miami Beach bicycle police officer with a motor scooter during an attempted traffic stop over an illegal parking violation.

Crudup also reportedly tried to strike another officer but missed.

The collision, which Crudup fled, left the unnamed officer with leg injuries requiring hospitalization and crutches.

Police chased Crudup into the Royal Palm Hotel, where he was staying. Police Lt. Jose Reina caught up to Crudup at the hotel elevator and held him at gunpoint, ordering him off of the elevator.

Video of the incident shows Crudup, a tall, thin and dreadlocked individual, complying with Reina’s orders, exiting the elevator with his hands raised and quickly lying face-down on the ground with his arms outstretched in front of him.

As Crudup places his hands behind his back to be handcuffed, more than 20 other Miami Beach officers arrive on the scene and surround him.

Just seconds after Rundle said an audible “clink” can be heard on the video denoting the handcuffs were closed around Crudup’s wrists, the video shows Sgt. Perez repeatedly kicking Crudup in the head and shoulder area.

Crudup, his body limp, is then picked up so that his head is about two feet off the ground. The officer lifting him then slams Crudup’s head on the ground. Several officers, including Kevin Perez — no relation to Sgt. Perez — then kick Crudup in the head again. Body camera footage shows blood pooling around Crudup’s head as the officers take turns kicking him.

Separate video shows police attacking bystander Khalid Vaughn, who was recording the arrest on his cellphone about 12 to 15 feet away.

Footage taken from police body cameras shows an officer instructing Vaughn to step back. Vaughn complies, taking about four steps back, before Sabater attempts to tackle him, forcing Vaughn to stumble back.

“The investigation into this incident, it is continuing,” Fernandez Rundle said during the press conference, which included Assistant State Attorneys Tim VanderGiesen, Robin Peguero and Miami Beach Police Chief Richard Clements, who quickly placed the officers on leave after news of the incident broke.

Crudup faces several charges including aggravated battery and assault on a police officer, resisting arrest with violence, criminal mischief, reckless driving resulting in damage to property or a person and fleeing and eluding.

All charges against Vaughn have been dropped, Fernandez Rundle said.

“I do believe that body-worn cameras are an important part of policing, and as you know, I advocated from the very beginning, along with the former chief of the Miami Beach Police Department, for their countywide usage,” she said. “They played a critical role in this case.”