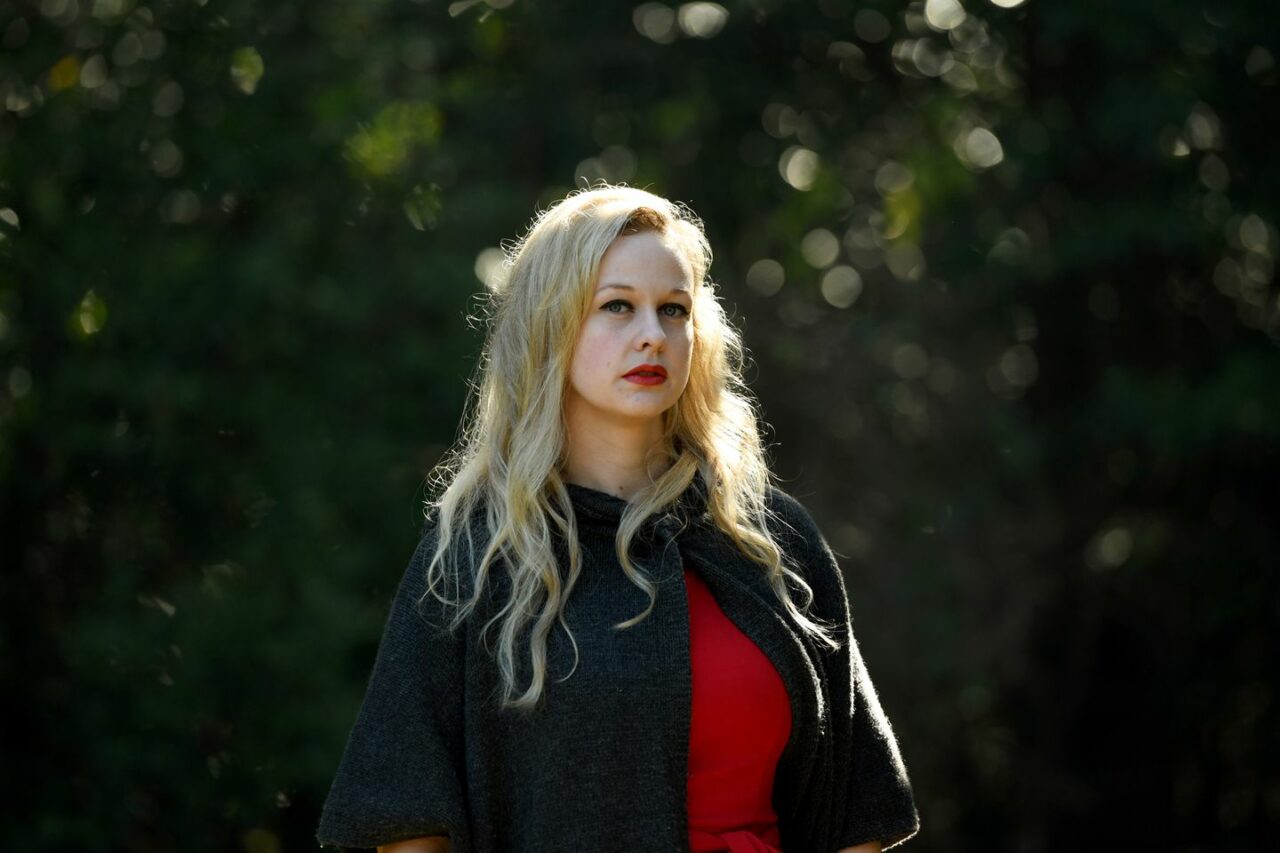 Jones, who filed to run for Florida’s 1st Congressional District on Sept. 29, garnered national attention after Florida and Tallahassee police raided her home in response to a hack of the Department of Health’s emergency communications system. Jones had called into question the accuracy of the agency’s information and said management had pushed her to manipulate data to project a more positive outlook.

However, she has denied involvement in the hack and later asked for criminal charges against her to be dropped. A Leon County judge denied her request.

Now, she’s running for Congress, and is starting her campaign on an aggressive note.

The mailer, paid for by Jones’ campaign account, contrasts her experience and priorities with that of incumbent Gaetz, as well as leans on criticisms of DeSantis. 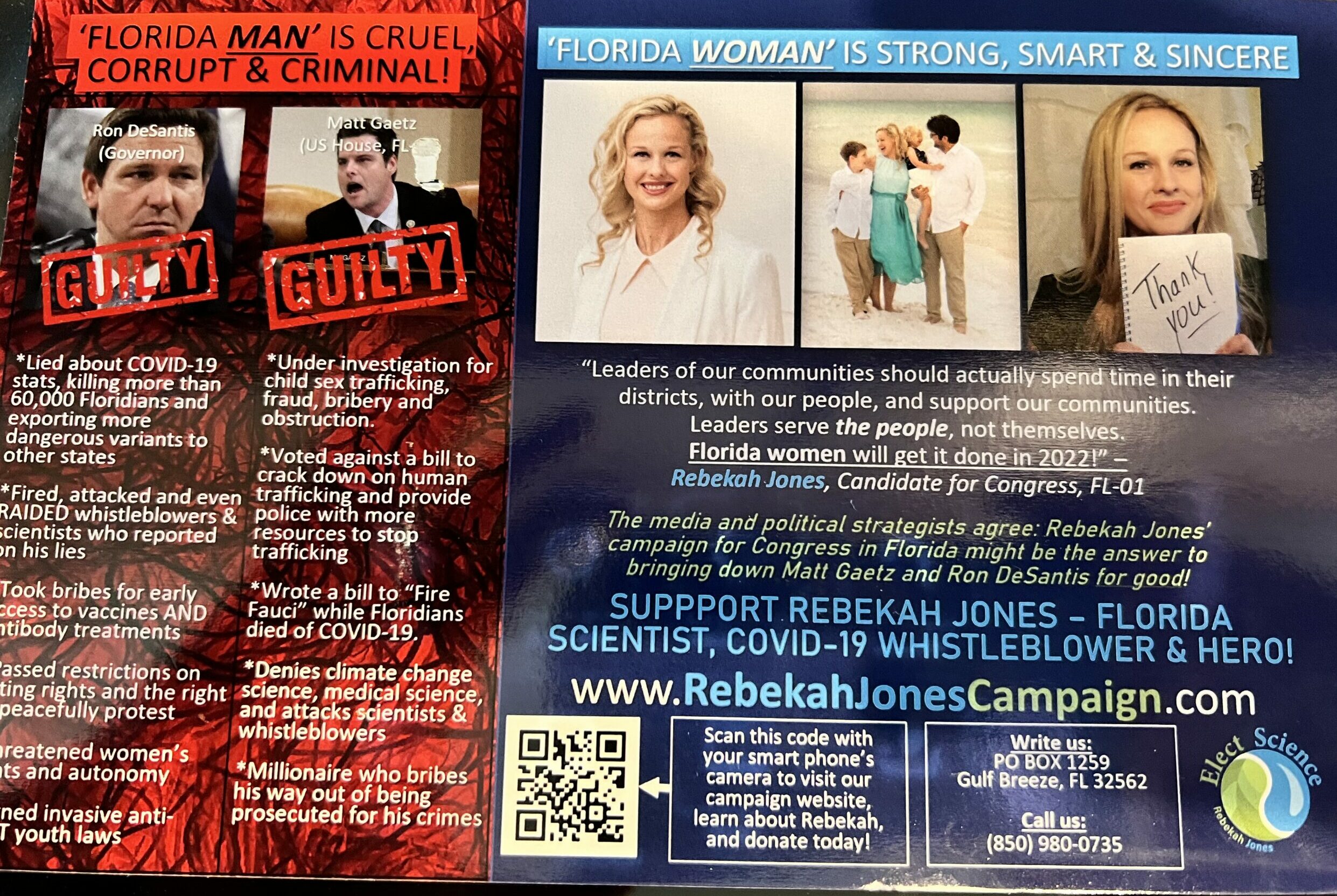 The mailer accuses DeSantis of “lying about COVID-19 stats,” and “firing, attacking and even raiding whistleblowers and scientists who reported his lies.” While DeSantis has been criticized by some for his response to the pandemic, which resulted in over 60,000 deaths in Florida alone, Jones does not point to any references for the accusations.

Jones’ mailers also claim that the Governor “passed restrictions on voting rights and the right to peacefully protest,” in reference to two controversial bills he signed this past year, SB 90 and HB 1, both of which are being challenged in court. To note, Republican supporters SB 90, which calls for several changes to Florida voting law, say it safeguards the election process, but Democratic opponents argue it is a form of voter suppression. As for HB 1, the state’s infamous anti-riot bill, supporters point to safety and order, while opponents question its impact on the right to protest.

The mailer also target Jones’ competitor, Gaetz, who she describes in the mailers as a climate change denier and against medical science. However, this claim may be faulty, as Gaetz has publicly acknowledged that “climate change is real,” and that humans contribute to it. Gaetz has been scrutinized, however, for proposing a bill to abolish the Environmental Protection Agency.

The mailer also highlights the current investigation Gaetz is facing for the sex trafficking of a minor, illicit drug use, misuse of campaign funds and sharing inappropriate images or videos on the House floor.

While attacking some of the state’s most prominent Republicans, the mailers also lay out Jones’ platform, and describes the candidate as “strong, smart and sincere.” Her priorities include climate action, veteran health care, LGBTQ rights, cannabis legalization and government transparency.

District 1 has remained in Republican hands for decades, and Gaetz won reelection in November 2020 by 30 percentage points.

Other candidates for Gaetz’s seat include fellow Republican John Mills, a former U.S. Navy pilot now working in the aerospace defense industry who as of last month had $231 of campaign cash on hand; Republican Jeremy Kelly, a Marine Corps veteran, active duty Navy serviceman and political newcomer who has raised and spent nothing this cycle; and Democrat Phil Ehr, a retired U.S. Navy commander who has nearly $118,000.

Mills and Ehr ran against Gaetz in 2020. Mills lost in the primary by an 71-percentage-point margin. Ehr fell to Gaetz by 31 percentage points.

Jones, a Democrat, has raised about $113,000 since launching her campaign, according to her filings with the Federal Elections Commission. Of that, she had about $18,000 remaining as of Sept. 30.

previousTakeaways from Tallahassee — A reckoning to come

nextCharcuterie boards: Tallahassee's hot craze that's been around for centuries