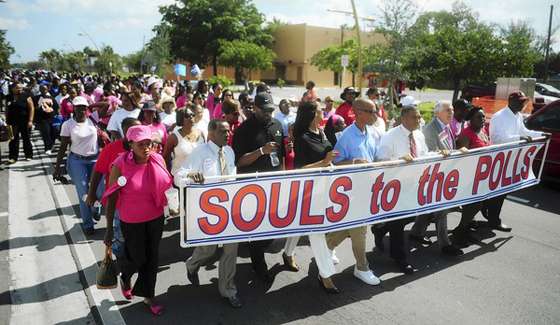 'We believe we need to turn out voters in all elections, that every election matters.'

A Souls to the Polls get-out-the-vote effort is being organized in Orlando Saturday for Tuesday’s City Council elections.

Equal Ground is teaming up with Black Voters Matter and other Central Florida organizations including church groups, the NAACP, and the Urban League, to organize a motorcade to roam neighborhoods Saturday in two Orlando districts — District 3 on the north side, and District 5 on the west side, to encourage voters to vote early.

Souls to the Polls efforts are commonplace in big elections but not in off-year elections. For this year’s elections, Orlando voters in three districts will have only one bubble to fill in on their ballots, for a City Commissioner choice.

Kristin Fulwylie Thomas, managing director for Equal Ground, said the group decided to organize Souls to the Polls efforts in part as an early educational response to the voter changes made in Senate Bill 90 this year. It’s also an effort to expand voter outreach into off years, to build voter habits, and to encourage people to get active in municipal elections and municipal government.

“Souls to the Polls has typically been happening during presidential or gubernatorial elections. But as an organization that’s been working to build Black political power, we believe we need to turn out voters in all elections, that every election matters to our community,” she said. “Our organization has been educating our community about the changes with regard to SB 90, so they know about the vote-by-mail changes, about signature changes and the ID things that are needed, and so they can make a plan to vote.”

Orlando also has a City Council election in District 1, where incumbent Commissioner Jim Gray faces challengers Bill Moore and Sunshine Grund. Saturday’s effort is passing on District 1, which has a relatively small Black population, especially compared with Districts 3 and 5. Nonetheless, Fulwylie Thomas said Equal Ground has been using phone banks to reach out to voters there as well.

Her group and the others will lead a caravan, featuring a billboard truck, music, and cars with voter information, rolling through neighborhoods in District 3 and District 5. There will be a stop at the Hope Church of Orlando around 10 a.m. and the Experience Christian Center of Orlando, around 11 a.m.

Black Voters Matter also is partnering with local groups for voting efforts this weekend in Jacksonville, Gainesville, and Greenville, where municipal elections are underway.

“One of our core values is ‘Black voters matter 365.’ And the reason for that is there will be other organizations who come in only during your big ballot elections, like presidential elections or mid-terms. Our situation is a lot different,” said Jamil Davis, Florida state organizing manager for Black Voters Matter. “We make sure, above everything else, we engage civically with the people we organize and advocate for all year round.”