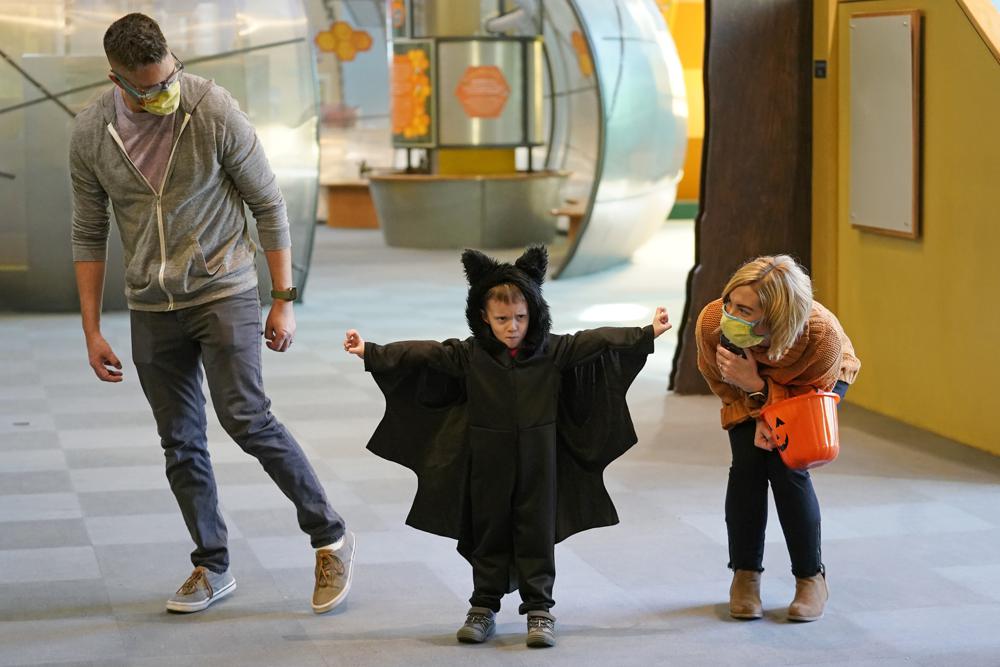 Witches and warlocks, ghosts and ghouls can breathe a little easier this year: Coronavirus cases in the U.S. are generally on the decline, and trick-or-treaters can feel safer collecting candy.

And while a new poll indicates Halloween participation is rebounding but still short of pre-pandemic levels, an industry trade group says people who are celebrating are driving record-level spooky spending this year.

Sales of candy, costumes and décor are up at least 25% over last year and are predicted to set a new high, between $10 to $11 billion, said Aneisha McMillan, spokeswoman for the trade group Halloween and Costume Association.

“People are really getting the Halloween spirit,” she said.

Though the pandemic is still a worry, outdoor activities like trick-or-treating have gotten the thumbs up from Dr. Anthony Fauci, the government’s top infectious diseases expert, and Dr. Rochelle Walensky, director of the Centers for Disease Control and Prevention. Experts advise people to keep sanitizer and masks handy and continue to steer clear of crowded, poorly ventilated spaces, however.

Angela Montierth of Sandy, Utah, said watching her 4-year-old daughter, Justina, celebrate Halloween this year has been “magical.” The family didn’t do much for the holiday in 2020 besides putting out candy for trick-or-treaters, so this fall they’ve been trying to make up for it.

“We did a pumpkin patch and we had a little Halloween get-together at our house with other little kids,” Montierth said at a trick-or-treat event at Discovery Gateway Children’s Museum in nearby Salt Lake City. “At this age they need to be playing with other kids, and they need the socialization aspect.”

A new poll from The Associated Press-NORC Center for Public Affairs Research found that 35% of Americans plan to hand out candy this Halloween, down from 42% in pre-pandemic 2019 — but still higher than the 25% mark seen in a separate NORC survey in 2020.

Among those skipping the door-knocking again this year is Rolando Cadillo of Phoenix, whose family includes a 15-year-old daughter and 4-year-old son. Last year they opted for a pandemic-safe Halloween at home and skipped giving out candy. This year they are stocking the sweet stuff but keeping the face masks on.

Cadillo’s son will dress up as Spider-Man but won’t be trick-or-treating, and he’s on the fence about whether to let his daughter go with her friends.

“We plan to stay home, but we’re going to give candies to the kids that knock on the door,” Cadillo said as the family left a Halloween Spirit costume store. “I think it’s better than last year. More people got vaccinated.”

Nearly 191 million people in the United States are fully inoculated against COVID-19, about 58% of the population. The country is on the verge of expanding its vaccination effort to children aged 5 to 11, but that won’t come until after Halloween pending final approval from the CDC.

Last year Halloween arrived as cases rose to about 81,000 a day around the country in the start of what ended up being a deadly winter surge. Many parades, parties and haunted houses were canceled due to bans on large gatherings and concerns that celebrations would spread the coronavirus. Others went ahead but with pandemic wrinkles and, at times, a nod to the nation’s penchant for turning to fear as entertainment in times of turmoil.

Today infections are on a downward swing in the U.S., currently averaging about 73,000 new cases per day compared with 173,000 in mid-September.

But in many places, people are ready for a holiday weekend full of festivities.

In Denver, families visited Union Station for a trick-or-treat parade, a face-painting station, a DJ playing Halloween tunes and a children’s train ride. A dad dressed as a chef carrying a tiny baby dressed as an ice cream sundae led his cupcake children through the halls, collecting candy as “Monster Mash” played in the background.

Sara Castiglione and her 5-year-old daughter, Emma, were back in the swing of Halloween this year. After hitting the parade on Thursday, Castiglione said their weekend plans include a pumpkin patch and more trick-or-treating.

Last year Emma “was very disappointed and sad that she wasn’t able to do anything because of coronavirus,” Castiglione said. “She even said today, ‘I’m so glad we can go outside and I don’t have to wear a mask and we get to do something. I don’t even care (about) dressing up, I just wanna do something!’”

Among the costume set, classics remain hot-sellers this year with Google search trends indicating witches, rabbits and dinosaurs are in the top spots. More contemporary get-ups inspired by the likes of the South Korean Netflix smash “Squid Game” and “WandaVision,” the hit Marvel series, are also popular, McMillan said. There are even a few topical offerings, like a couples costume of a vaccine and syringe, she said.

But the surge of enthusiasm means there have also been some costume shortages attributed to retailers’ uncertainty in placing orders combined with the supply-chain issues bedeviling many parts of the economy.

“A lot of people are getting really creative because they can’t find the singular costumes they wanted. They’re doing group costumes, or couples costumes, so they can kind of mix and match and pull things together,” McMillan said.

Some trends have shifted since last year, with fewer people choosing first-responder and superhero costumes and more leaning toward pop culture and nostalgia.

“This is the millennials’ absolute favorite holiday, and they are notoriously nostalgic,” McMillan said. “We’ve all been cooped up for so long. … I think it’s gonna be the biggest celebration ever.”

previous'Souls to the polls' voting effort planned in Orlando Saturday