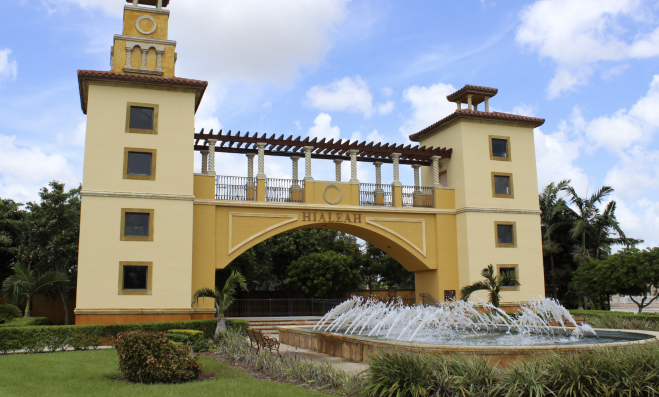 Two candidates have emerged as frontrunners.

Hialeah will have a new Mayor soon. Who it is depends on the outcome of a citywide election Tuesday.

Bovo and Garcia-Martinez have emerged as the front-runners.

Bovo is well-known, having begun his political career as a Hialeah Council member before being elected to the Florida House, a post he held for less than three years before earning a seat on the County Commission. Ahead of reaching term limits there last year, he ran for Miami-Dade Mayor, losing to Daniella Levine Cava in a runoff.

In early October, Donald Trump endorsed Bovo. A nod from the former President is a powerful political commodity in Hialeah, where Trump’s share of the vote ranged from 70% to 78% at precincts across the city last November.

Garcia-Martinez made history as the first Hispanic woman to serve as President of the Hialeah Council, of which she was a member from 1991 to 1995 and from 2007 to 2019. Her community involvement has had countywide impact, too. Former Miami-Dade Mayor Alex Penelas appointed Garcia-Martinez to the county Health Task Force.

She has characterized Bovo’s candidacy as a “backup plan” to his primary goal of being elected Miami-Dade Mayor. Hialeah, she said, deserves “a Mayor who thinks of them first and not … because he is out of options and needs a job.”

Godo, a city activist, led an effort in 2019 to impeach Hernández for “abuse of power and mismanagement.” It didn’t work, but he succeeded in gathering more than 5,000 petition signatures.

Amazon sells several books he’s written, including one whose title translates from Spanish into “The Vagina of Crazy Time,” which an apparent quote by Cuban novelist Jose Lorenzo Fuentes describes as a novel “about dictators,” and an e-book series titled “Revista 1%.” A description accompanying the first book in the series translates to, “Against the socialism of the Democratic Party of the United States against socialist indoctrination in schools.”

Santana has turned into something of a perennial contender for the Mayor’s race. This marks his third consecutive swing at Hialeah’s top office, having run in 2013 and 2017. During his first bid, he was harassed by a former Hialeah cop who later claimed Hernández paid him to do so.

Martínez, who served as Mayor in the early 1990s, has called for Hialeah “to be put back to where (I) met it 30 years ago,” pointing to the city’s fewer police and fire personnel today as evidence it is “in sad shape now.”

In 2013, he unsuccessfully vied for a Council seat. Six years later, he announced the launch of a 24-hour television station operating in Miami Lakes specializing in local political information and sports. Eight months later, the deal fell apart.

If no candidate secures 50% of the vote, the top two finishers will face each other in a runoff Nov. 16.