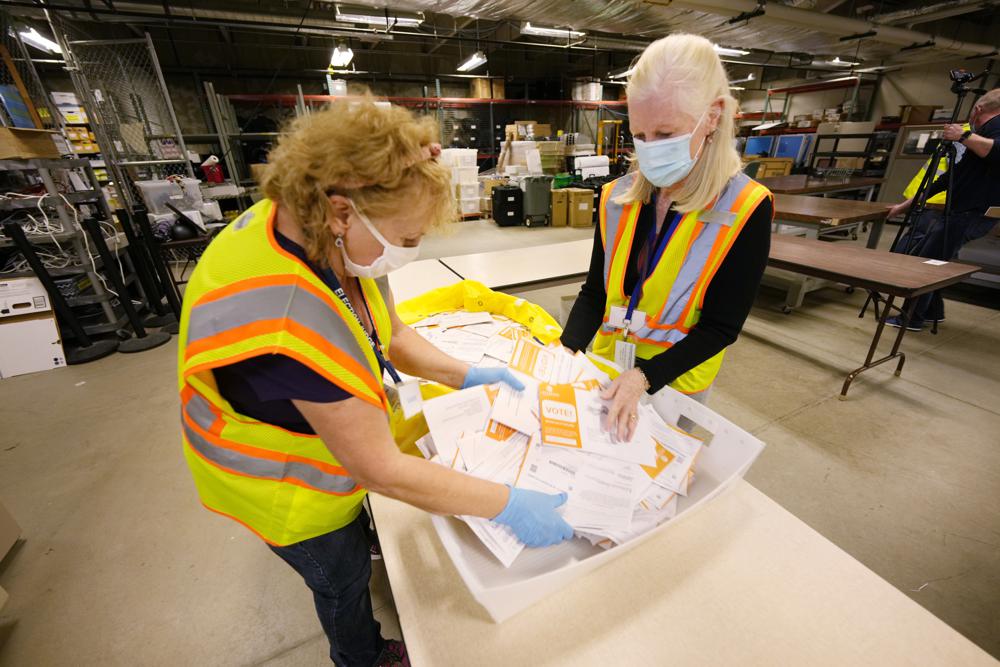 Florida was among the states adding ID requirements for mail voting.

After a year of falsehoods surrounding the 2020 presidential election, Republican-led ballot reviews and new voting rules passed by GOP lawmakers, election officials are hoping a smooth election on Tuesday will demonstrate that the system works.

The off-year elections feature local contests for mayor, city council and school board in communities across the country. Voters in some states will be deciding statewide ballot initiatives. And New Jersey and Virginia will elect governors.

“There is an opportunity here to show the world and to show America that democracy is going to keep going, and election officials will keep doing their job despite all the rhetoric,” said Jennifer Morrell, a former elections clerk in Utah and Colorado who now advises election offices on security and other issues.

Here’s a look at some of the major election and voting issues heading into Tuesday:

HAS ANYTHING CHANGED SINCE 2020?

The pandemic triggered unprecedented challenges for election officials last year. Some states implemented emergency changes to help make mail voting easier for people wary of crowded polling places. Some of these pandemic-related changes have been made permanent, while others have expired.

In Virginia, voters must now remember to add a witness signature to their mail ballots — a requirement that was waived last year. Election officials there say they are seeing some ballots arriving without the witness signature and are reaching out to voters to provide information on how it can be fixed so these ballots will count.

WHAT ABOUT NEW VOTING RESTRICTIONS?

Several states controlled politically by Republicans passed laws this year that tighten voting rules and add new hurdles for mail ballots. Republican lawmakers said the changes were needed to improve security and boost public confidence after the 2020 election. Some of these changes will not take effect until later elections, but new rules are in place in Florida, Georgia and Iowa. In Florida and Georgia, ID requirements have been added for mail voting. In Iowa, voters have fewer days and locations to vote early in person and less time to request and return mail ballots. The state’s second largest county reported last week that more than 250 people were denied mail ballots under a new deadline requiring they be requested at least 15 days before an election — instead of the previous 11 days.

WHAT OTHER CHALLENGES ARE FACING VOTERS?

In Louisiana, election officials are still dealing with the destruction of Hurricane Ida, which forced officials to push back the election to Nov. 13. Thousands of voters will be casting ballots at different polling locations. Some voting sites have been set up in tents because there are few buildings in the immediate area that were not damaged from the Aug. 29 storm. Officials are using mail, advertising and signs to notify voters of the polling place changes.

WHAT OTHER CHALLENGES ARE FACING ELECTION OFFICIALS?

Election officials are facing a level of distrust from a segment of the public who believe the 2020 election was stolen from former President Donald Trump, despite no evidence of widespread fraud. As a result of these false claims, election officials have been targeted with a flood of threats and harassment related to their job. At a U.S. Senate hearing last week, election officials from both parties described receiving death threats and urged Congress to pass legislation boosting protections for election workers.

“I never once thought when I started in elections that I would have to teach de-escalation tactics to our workers, but that’s sort of where we are at right now,” Natalie Adona, assistant clerk-recorder for California’s Nevada County said during a discussion last week hosted by the Bipartisan Policy Center.

WHAT ARE ELECTION OFFICIALS DOING ABOUT MISINFORMATION?

One change election officials have made is boosting their voter education and outreach efforts, to answer questions from skeptics and reassure others that elections remain fair and secure: “Sunlight and transparency are our friends,” Minnesota Secretary of State Steve Simon said. Last week, a group of local election officials in Florida issued a statement warning of the dangers of misinformation and disinformation sowing discord and undermining faith in U.S. elections. The group called on voters to “dedicate themselves to learning about the many safeguards already in place that guarantee the accuracy of Florida’s elections.”

Some officials are even using the questions from voters as an opportunity to recruit workers. “I say, ’Come on in, come work for us,’” said George Stern, clerk-recorder for Colorado’s Jefferson County. “When you actually see the checks in the process, you start to say, ’Oh, OK, that’s right, they are verifying the signature on every ballot so someone couldn’t mail in 20,000 ballots from a foreign country.’”

IS MAIL VOTING LESS SECURE THAN VOTING IN PERSON?

Numerous safeguards are in place to ensure that people casting mail ballots are who they say they are and only vote once. Voter fraud does happen, but it is exceedingly rare amid the tens of millions of ballots cast in federal elections every two years.

Election officials say the relentless attacks on mail voting and unsubstantiated claims of fraud over the last few years have taken a toll. “It became a bit of a tsunami of disinformation that was really designed to cast doubt on the process,” said Amber McReynolds, former Denver elections clerk who now leads the National Vote at Home Institute. “That is a direct attack on our democracy and our voting process, and it certainly makes it difficult for election officials to do their jobs. But more importantly, it deteriorates people’s trust in the process.”

nextLast Call for 11.1.21 — A prime-time read of what’s going down in Florida politics