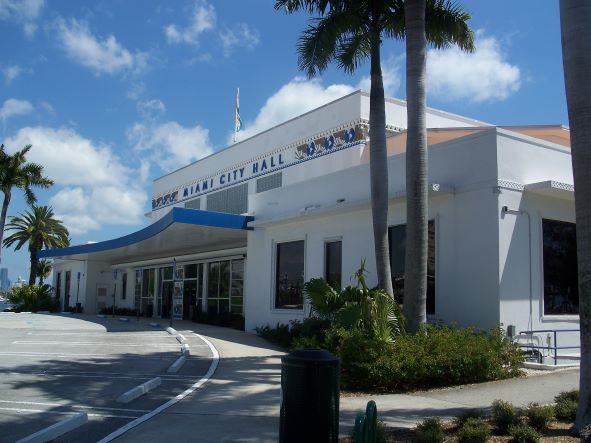 Miami has two Commission seats up for grabs Tuesday, and their occupants — one incumbent, the other an appointee hoping to be elected for the first time — hope to stave off their respective challengers to remain in office for another four years.

If no candidate secures 50% of the vote, the top two finalists will compete in a runoff Nov. 16.

The incumbent, District 3 Commissioner Joe Carollo, has flexed his political muscle in City Hall and his fundraising muscle on the campaign trail.

In late September, Carollo led a public evisceration of Art Acevedo, Mayor Francis Suarez’s handpicked police chief who has since been fired.

Carollo, a former Miami Mayor, has since April raised nearly $1.9 million between his campaign and political committee, Miami First, to keep his seat. Much of that money came from the real estate sector, a booming business in the Magic City.

Facing him are local business owner Adriana Oliva, lawyer Quinn Smith and Miguel Soliman, who has previously run for seats on the Miami and Miami-Dade County Commission. Together, they’ve raised a bit over $133,000 — about 7% of Carollo’s haul.

While Carollo is unpopular outside his District — the Miami Herald Editorial Board recently called him “unfit to serve again” — it remains to be seen if his antics in and out of City Hall cost him.

Since December, he’s suggested Miami and Hialeah should secede from Miami-Dade after a dispute with the county over street blockades, called fellow city Commissioner Alex Diaz de la Portilla “the biggest disappointment of (his) entire political history,” and traded accusations of corruption with a Miami cop who was the subject of a two-year probe by the Florida Department of Law Enforcement and FBI.

If Carollo loses Tuesday, it’ll mark the first time in 12 years someone without his last name represented District 3. His younger brother, Frank Carollo, held the district from 2009 to 2017, when he had to vacate office due to term limits.

Commissioner Jeffrey Watson reneged on his vow to vacate his seat on the Miami Commission after his one-year term ended in November — a pledge he made numerous times before city Commissioners gave him the seat.

“I am entitled to change my mind,” he said when the Miami Herald reported he was raising money for a committee intended to support a proper election bid. Since taking office, he’d grown familiar with the city’s inner workings, connected with constituents and identified problems for which he could develop solutions.

Fellow Commissioner Manolo Reyes, who had solicited Watson’s promises to leave office without a fuss last year, changed his tune as well. He said he’d support Watson’s new plan after serving alongside him and seeing his work in the community, including efforts to get Black residents vaccinated and deliver financial support to the community during the pandemic.

Michael Hepburn, one of six candidates challenging Watson for the seat, told Florida Politics in September he wasn’t surprised by Watson’s move, but that doesn’t change what it means.

“It’s unfortunate but not unexpected that he is a liar,” said Hepburn, a nonprofit executive for Reimagine Miami Foundation.

Watson has raised around $210,000 between his campaign and political committee, Fighting for Change, since July. That’s still less than Christine King, a lawyer and CEO of the nonprofit Martin Luther King Jr. Economic Development Corp., who has added more than $325,000 since April 2019.

Hepburn has raised about $45,000, not counting additional kick-ins from The Collective PAC, which endorsed him Sept. 1.

Other candidates include resident Fraçois Alexandre, who sued Miami after city police beat him; Zico Fremont, a local business owner and nonprofit worker; and Revran Lincoln. None has raised more than $10,000. Lincoln has raised nothing, Miami records show.

Like Hepburn and Watson, all of them were among 14 people who applied last year to fill the vacancy Hardemon created when he left the City Commission for County Hall.