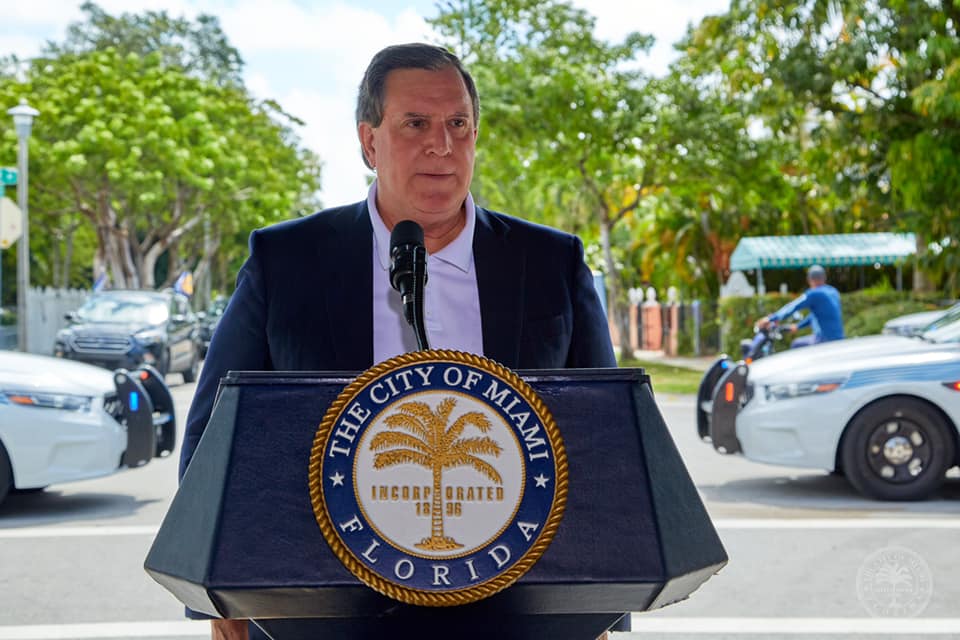 It remains to be seen whether his penchant for controversy sours his reelection chances.

Much of the money, unsurprisingly, came from Miami’s booming real estate market, including some notable commercial property owners and developers.

Now less than three months from the city’s General Election, the former Miami Mayor has more than $1.6 million in cash to defend the City Commission seat he won in 2017 by just 252 votes. And with an effort to recall him last year in the rearview, donors have been opening their wallets.

Among his biggest givers: Julio Del Rey and Jorge Del Rey, whose hotel and residential properties throughout the county have drawn attention in recent years.

The brothers, who each gave Carollo $10,000, own and operate Executive Fantasy Hotels, a string of local erotic-themed motels available for hourly rentals.

A link on Instagram to the website prompts visitors to sign a petition against a pending resolution in the neighboring city of Hialeah “that would eliminate hourly rentals” in the city, which are “a key service (they) provide to law-abiding adults in the community.”

A former Goldman Sachs executive, Kimmelman owns a minority stake in the Miami Marlins, whose ballpark is in the Miami neighborhood of Little Havana, which Carollo represents.

Another $15,000 came from Park Place at Brickell LLC, the holding company for 1450 Brickell, an office tower in the city.

In addition to several property purchases throughout Miami, Park Place manager Ramon Llorens has been buying up properties in Jacksonville for redevelopment in recent years.

Irving Weisselberger and his wife, Sonia Weisselberger, gave $5,000 through five limited liability companies they own.

Weisselberger and the company he co-manages with Jason Morjain, Dragonfly Investments, specialize in the acquisition of distressed properties.

CG Summer Investments, a subsidiary of Miami-based developer David Martin’s Terra Group, chipped in $5,000. So did 1177 Bay Harbor Islands LLC, a real estate firm based out of the Miami neighborhood of Coconut Grove.

In prior months, Carollo received large contributions from major Miami developers such as Jorge Mas, who with soccer star David Beckham and other investors aim to build a soccer stadium and commercial complex called Miami Freedom Park on the city’s Melreese Golf Course; Moishe Mana, who by his own account has spent roughly $500 million buying up properties throughout the city; and TREO Group principal Eduardo Garcia.

While Carollo’s proverbial campaign cup runs over, it remains to be seen whether his penchant for controversy from the city dais sours his reelection bid.

He has also suggested Miami and Hialeah should secede from Miami-Dade after a dispute with the county over street blockades, called fellow city Commissioner Alex Diaz de la Portilla “the biggest disappointment of (his) entire political history” and traded accusations of corruption with a Miami cop who was the subject of a two-year probe by the Florida Department of Law Enforcement and FBI. And that’s just since December.

But if Carollo’s worried his quarrelsome approach to politics may jeopardize his chance of staying in office, he isn’t showing it through outside-the-box spending. Of less than $14,000 his filings list in expenditures, nearly all has gone toward traditional campaign mailers and financial services.

Rodney Quinn Smith, a lawyer and Carollo’s closest fundraising competitor with $41,000 gained since launching his campaign in May, is taking a similar approach.

Of about $12,700 Smith has spent so far, almost all went to mailers, door hangers and general financial services.

According to an email from Smith’s campaign, he is the only candidate so far to qualify for the race by collecting more than 400 petition signatures.

That grassroots support reflects his campaign’s earnings, of which all but a few business donations and $5,100 he gave himself came by way of individual donations.

Candidate Andriana Oliva, the owner of Miami-based marketing firm The AOI Insight Group, has raised $5,425. All but a single $1,000 donation from a subsidiary of real estate investment company Wynwood Equity Partners came through individual donations.

If Carollo loses in November, however unlikely that may be, it’ll mark the first time in 12 years someone without his last name represented District 3.

His younger brother, Frank Carollo, held the district from 2009 to 2017. He had to vacate office due to term limits.