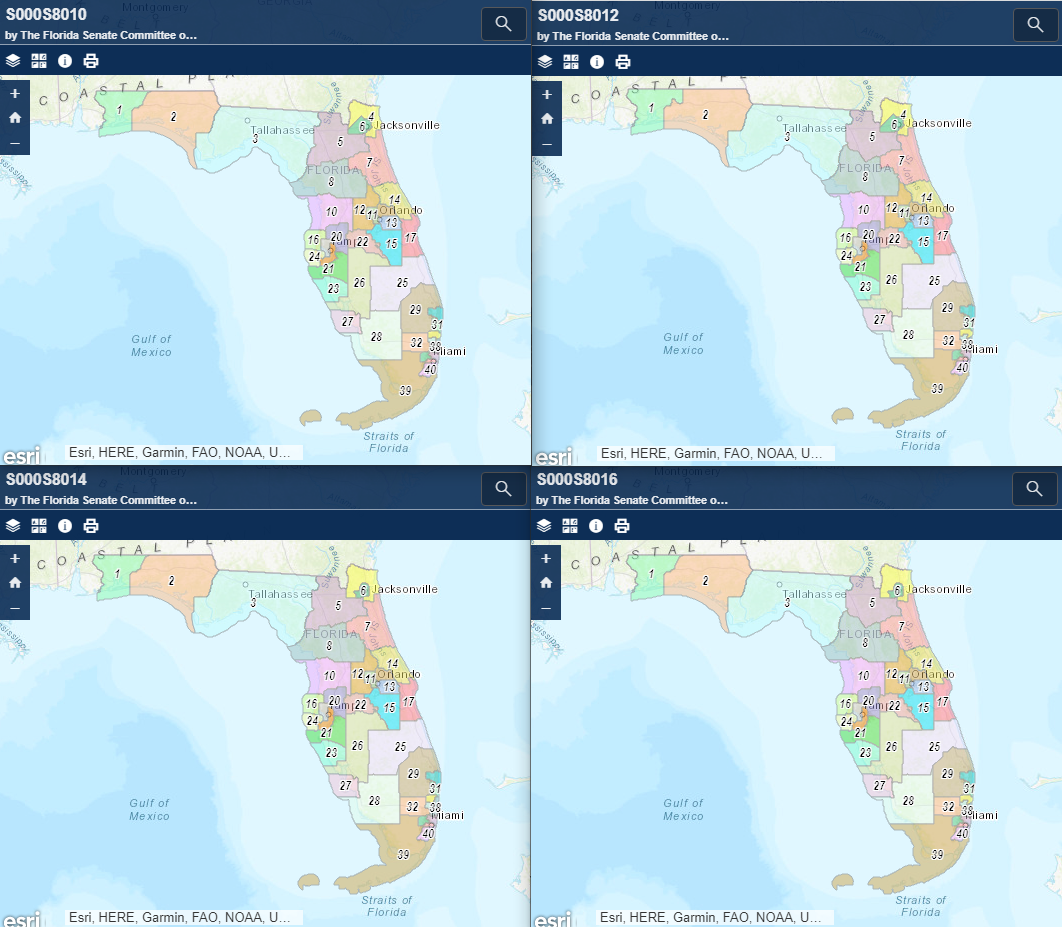 Four Senate and four congressional maps have been released so far.

The Senate Reapportionment Committee produced its first draft maps for the once-a-decade redistricting process in Florida.

The first round of cartography includes four proposed maps dividing Florida into 40 Senate districts, and four splitting the state into 28 congressional districts. That’s one more congressional seat than exists in Florida today, thanks to growth recorded in the 2020 U.S. Census.

Jay Ferrin, staff director for the Senate committee, issued a memo reiterating the maps were drawn in accordance with direction from senators at an Oct. 18 meeting. That included strict adherence to Tier 1 standards set through a Florida Supreme Court ruling on Florida’s Fair Districts amendment, and a balance of needs in Tier 2 standards.

“In drawing draft maps for the select subcommittees to review, staff did not consult with any person other than counsel. Districts were numbered to be roughly analogous to their predecessor districts. These are placeholder numbers that may be renumbered at the direction of the committee,” Ferrin wrote.

“In drawing plans, staff relied on the plain language of the constitution, federal law, and existing judicial precedent to ensure that plans comply with the complex layering of federal and state standards. Districts were drawn to balance co-equal Tier-Two standards of Article III Sections 20 and 21 of the Florida Constitution, unless doing so would conflict with Tier-One standards. Districts were drawn without the use of any residence information of any sitting member of the Florida Legislature or Congress and without regard to the preservation of existing district boundaries.”

Detailed data on each map is available at the FloridaRedistricting.gov website, where the plans can be seen among other submitted maps from the public and baseline maps showing political boundaries as they sit today.

Screenshots of the drafts appear below, with districts numbered in close correspondence to the closest existing seats.

Many national observers were surprised how closely the maps hew to current lines.

David Wasserman of Cook Political Report, who had predicted the GOP-dominated Legislature would try and make a congressional map that allowed Republicans to flip three seats, said these maps are a far cry from that.

“Bizarre: these maps shore up (Florida’s 27th Congressional District for) Rep. Maria Salazar (R), but otherwise are barely gerrymanders,” he tweeted, “By my count these maps break down 16-12 Trump-Biden, vs. 15-12 today. Is this a head fake?”

Many had wondered where Florida’s “new” congressional district would end up. It did show up as expected in Central Florida, though the district marked “28” on draft maps closely hues to Florida’s 15th Congressional District, held by Republican Rep. Scott Franklin. The map marked “15” in fact looks like a blue-leaning district in the Tampa suburbs. The new “28” also carves into some of Democratic Rep. Darren Soto‘s district, which today is the most overpopulated in the state according to census totals, but leaves Soto’s hometown of Kissimmee in Florida’s 9th Congressional District.

“What’s more, the map keeps (Florida’s 7th Congressional District) Rep. Stephanie Murphy (D) and (Florida’s 13th Congressional District) Rep. Charlie Crist (D) in Biden seats, even though Rs could turn them into double-digit Trump districts,” Wasserman tweeted. “I’d be very surprised if Tallahassee Rs settle for this. The only possible explanation, if this map doesn’t undergo drastic changes: Republicans are afraid of an adverse ‘Fair Districts’ ruling from the FL Supreme Court and want to ensure their own incumbents’ safety first.”

Indeed, the Senate and congressional map approved by the Legislature a decade ago ended up tossed a few years later, with courts finding partisan plants had put in maps favoring the Republican Party. The baseline maps today were drawn by the Women’s League of Voters, a plaintiff group who successfully sued over Fair Districts violations.

Michael McDonald, a University of Florida professor closely following the process, said if the maps are a misdirect, that would be a legally risky move.

“If this is a head fake, that would be a colossally stupid move,” he tweeted. “The Florida state courts found compelling evidence in sequential maps that moved towards a partisan gerrymander.”

Democratic congressional candidate Eddie Geller quickly embraced the maps. He has filed to challenge Franklin, but the new map puts him in the new CD 15, which appears to be a jurisdiction that voted for President Joe Biden.

“New potential redistricting maps show that Florida’s 15th District will turn into a Biden seat,” he said. “Our campaign is just getting started to flip Florida’s 15th, and these new maps show the viability of this campaign greater than ever.”

There was less immediate response to the Senate maps, though those in some ways shows greater shifts. Sen. Ben Albritton, a Wauchula Republican, sees his district largely bisected with a good chunk of his jurisdiction shifting to an East Coast district represented by Sen. Gayle Harrell, a Stuart Republican.

“I wouldn’t be premature about discussing outcomes,” Baxley said, noting maps aren’t final. “… We all will adjust to the maps and the realities the maps project.”

But he noted changes have to reflect growth in the state. Much of that growth was in Central Florida.

In the House, Democrats said they were pleased to see one chamber moving ahead with mapmaking.

“I’m glad to finally see some maps. Hopefully, the House follows suit soon and we can get to work. It’ll be interesting to see how these maps hold up to scrutiny, especially in how they perform under the (Voting Rights Act),” said Rep. Kelly Skidmore, ranking Democrat on the House Congressional Redistricting Subcommittee.

Rep. Joe Geller, ranking Democrat on the House Redistricting Committee, continued to say the process lacked public input, and he called for as much before his own chamber drafts maps.

“We continue to hope that the House will respond to our calls for a more open process where the people’s input is solicited and respected,” he said. “The House still has not rejected that approach outright. As far as the Senate maps, the House seems to be a bit more circumspect in proceeding, and we look forward to having a constitutional and fair set of proposals to review in our chamber.”

“Now we can begin the actual work to provide fair districts to the people of Florida,” he said. “I look forward to finally having substantive and public conversations about this important process.”

previousJoe Henderson: Rift between Hillsborough Republicans had to happen