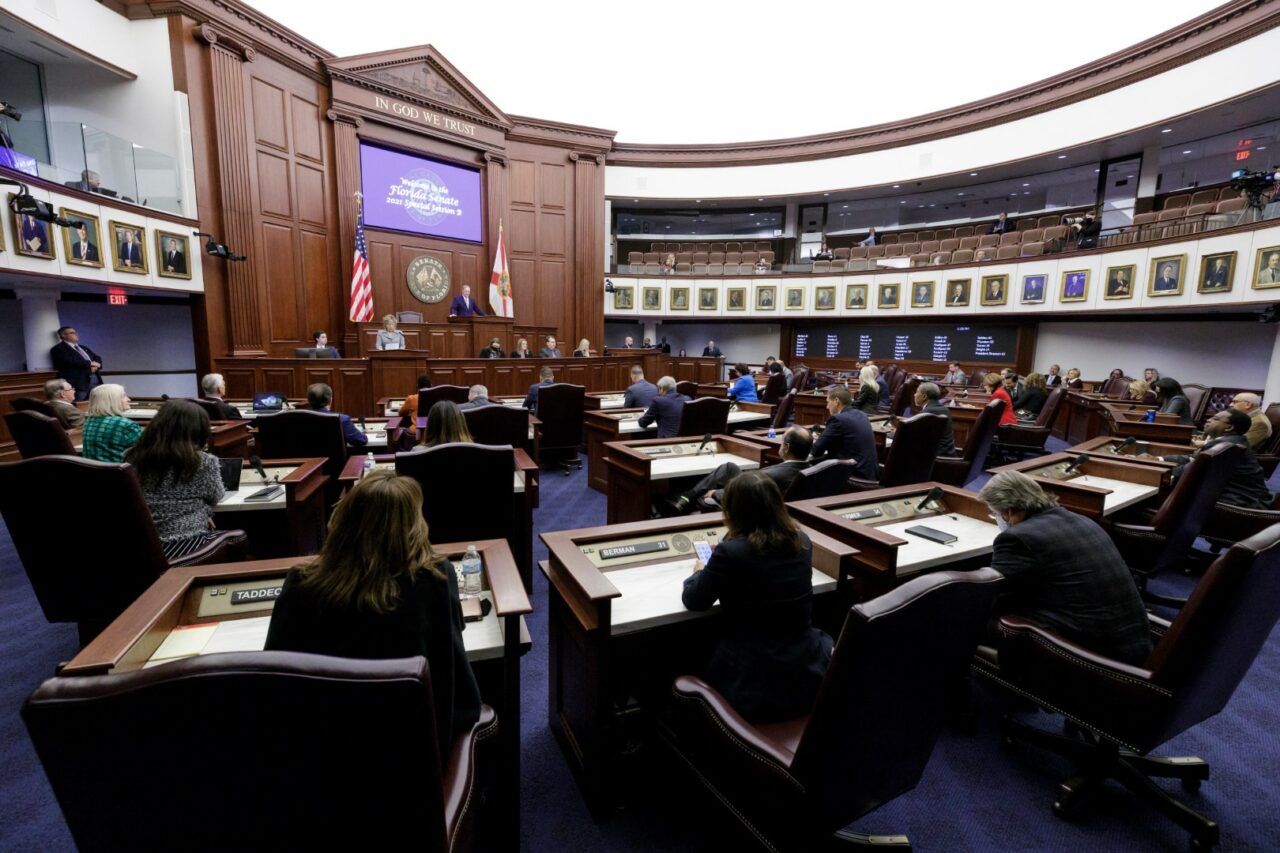 "The government cannot solve every person’s every problem."

During some four hours of hearings Monday before the Senate Commerce Committee, for example, conservative political activists joined forces with vaccine-resistant first responders, plus doctors who flew in for the occasion from as far away as Hawaii.

Taken together, they portrayed the COVID-19 vaccines as actively dangerous and lavished praise on natural immunity, hydroxychloroquine, and ivermectin, a treatment for parasites in farm animals that, according to the U.S. Food and Drug Administration, is not useful in treating COVID-19 in humans and can be dangerous in high doses.

“I’m really concerned that we’re up here saying that a horse de-wormer is real science,” said Angie Nixon, a Democratic committee member from Duval County. “I’m scared at some of the testimony that came from members of the public today.”

The committee went on to approve the measure mostly along party lines. Earlier, the Senate Judiciary Committee voted, 7-4, to approve SB 2B, its version of the legislation. Neither panel accepted any amendments, meaning compatible bills will be available for floor votes on Tuesday morning.

“Nothing is more critical than this discussion at this time,” said Senate sponsor Danny Burgess, who represents parts of Hillsborough, Pasco and Polk counties.

The legislation under consideration during a special session of the Legislature would prohibit worker vaccine mandates unless they allow exemptions for doctor-endorsed medical reasons including pregnancy and “sincerely held” religious reasons, plus immunity based on having recovered from COVID-19.

Additionally, workers could agree to undergo coronavirus testing or wear personal protective equipment such as face masks. Also, workers fired under similar mandates could file complaints with the state attorney general’s office that could bring fines as high as $50,000 under the legislation and draw unemployment compensation.

The measure also would clarify that parents have the right to decide whether their children get vaccinated or wear masks in school.

If all goes as planned, the Legislature would approve $6 million in new spending during the special session — $1 million to study how to create a state version of the federal Occupational Safety and Health Administration and $5 million to allow Attorney General Ashley Moody to sue the Joe Biden administration over its mandates.

“A lot of the questions and the uncertainty around it, around the questions of what’s happening on vaccines and COVID, have to do with the courts, the fact that we’re involved with active litigation. We want to move that as quickly and successfully as possible, so we want to make sure the attorney general has all the resources she need to do that,” House Speaker Chris Sprowls told reporters following the morning floor session.

Among the organizations that sent representatives to the House hearing to support the bill were the Eagle Forum, which pushes to stop mandatory COVID-19 vaccinations, according to its website, and Florida Right to Life.

Members also heard from firefighters and a nurse who face job losses for refusing local mandates to get vaccinated.

By contrast, no doctors supporting federal health authorities appeared. The League of Women Voters of Florida and the American Lung Association did show up to urge the measure’s defeat.

That left the floor to people like Dr. Gene Posca of the Cleveland Clinic’s Indian River Hospital, who called the vaccines a “dangerous and experimental drug” being imposed by “fascists from D.C.” and added: “Their blitzkrieg against our freedom will continue.”

Dr. Jeffrey Mueller, in family practice in Orlando, said he has been treating COVID-19 patients with ivermectin and called it “an incredibly effective therapeutic.” By contrast, he said this of the vaccines: “What do we know about it? We have months of data — that’s nothing.”

David Wiseman, a pharmaceutical researcher from Texas, alleged that medical journals censor experts like himself who argue for the efficacy of those unapproved drugs.

Like others who testified, Posca accused federal public health officials of collusion with the pharmaceutical companies and of failure to investigate the efficacy of natural immunity, acquired through infection. There were repeated claims that the vaccines are too dangerous and that people refusing the shots are subject to workforce discrimination.

Its supporters emphasized that the legislation would forbid vaccine mandates for public employees and allow them at private businesses only subject to exemptions for medical reasons including pregnancy or plans to become pregnant; sincerely held religious beliefs; immunity based previous infection as documented by lab tests; agreement to undergo regular coronavirus testing; or agreement to wear personal protective equipment on the job site.

In other words, it would parallel but be more restrictive than exemptions allowed under the Biden administration mandates for large private employers, federal contractors, and medical providers. Moreover, the measure would expire on June 1, 2023.

Detractors still expressed fears the measure would give employers more power to demand they get vaccinated than they now hold, and that the forms they would have to sign documenting their claims to exemptions would become public records.

Even Erin Grall, the House co-sponsor who represents Indian River and part of St. Lucie County, lamented the misinformation and “hyperbole.”

“There is not an adult vaccination program in this bill. There is no mandatory reporting to the state,” she said, mentioning two allegations that came up during the hearing. Grall noted that existing state law forbids employers from sharing workers’ health status or treating them differently.

But it’s up to individual workers to sue over such violations, Grall continued.

‘The government cannot solve every person’s every problem. And that is exactly what we are pushing back against with these federal mandates where the government is coming in and saying that there is a one-size-fits-all for every person in the state of Florida.”

previousSunburn — The morning read of what’s hot in Florida politics — 11.16.21