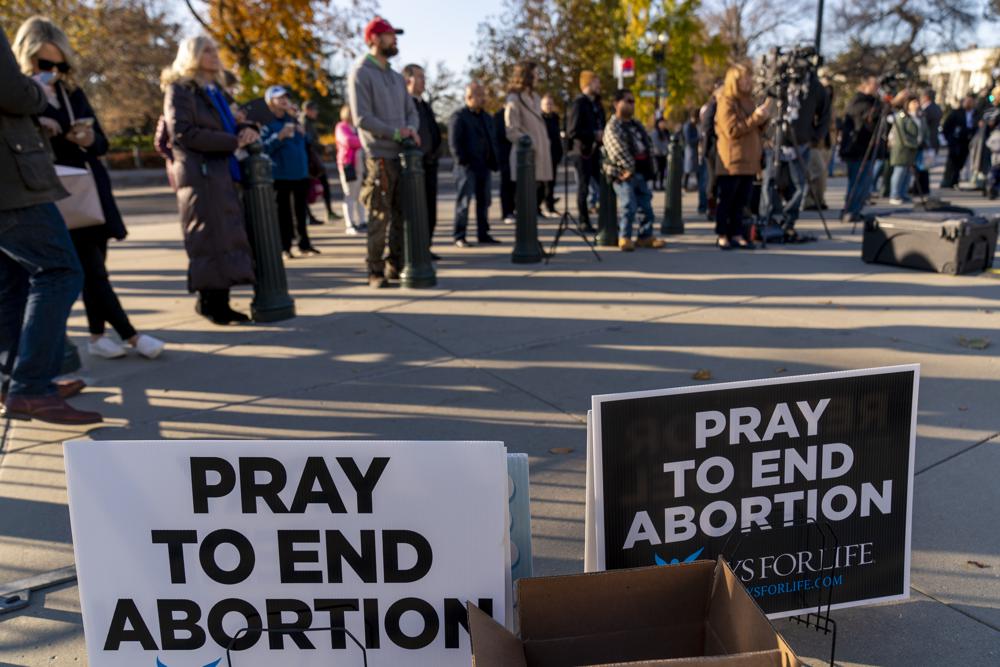 The issue over decades remade the Republican Party into a social conservative force.

It’s the moment conservatives have been waiting for.

On Wednesday, oral arguments at the Supreme Court represent the best opportunity leaders on the right have had in decades to gut the landmark 1973 Roe v. Wade decision, which codified a woman’s constitutional right to an abortion before a fetus can survive outside the womb.

If they are successful, it could validate years of often painstakingly granular work that ultimately remade the Republican Party from an alliance of business-friendly leaders into a coalition of cultural conservatives and evangelicals who turned the issue of abortion into a national flashpoint. Even if the justices don’t explicitly overturn Roe, they could open the door to a flurry of new restrictions that would please the right.

Buoyed by a court now dominated by a 6-3 conservative majority, some leading Republicans were already expressing confidence on Tuesday.

“We are asking the court in no uncertain terms to make history,” former Vice President Mike Pence, who has been laying the groundwork for a presidential run in 2024, said during a speech in Washington. “We are asking the Supreme Court of the United States to overturn Roe v. Wade and restore the sanctity of life at the center of American law.”

The justices will weigh whether to uphold a Mississippi law that bans abortion after 15 weeks, with limited exceptions — well before the current established point of “viability,” at around 24 weeks. The court is also weighing challenges to a Texas law that bans abortions after six weeks — before many women even know they’re pregnant.

The court could decide to uphold current precedent, let the law stand, effectively doing away with the current viability standard, or overturn Roe entirely.

“This is the first time that they have clearly had a majority of pro-life-leaning justices,” said Columbia Law School’s Carol Sanger, an expert in reproductive rights. ”So they have the votes if they choose to use them.”

The court’s decision, expected by late June, could dramatically shift the contours of next year’s midterm elections, providing a new animating force for Democrats, who largely support abortion rights and have struggled to rally around a unifying issue this year.

Scuttling Roe “will surely embolden efforts of conservatives in many states to craft laws they think might not have held up under Roe,” William Martin, a professor of religion and public policy at Rice University who has studied the rise of the anti-abortion movement, said in an email. “Conservatives will regard this as achieving a long-sought goal, but it may come at a significant cost, since Republicans probably already have most of the voters for whom opposition to abortion is the ultimate litmus test.”

Still, for conservative activists, the case is a culmination of decades of work electing Republican state legislatures, enacting new barriers to abortion access, and supporting anti-abortion judges, including the new conservative supermajority on the Supreme Court.

“Tomorrow, the Supreme Court will hear the biggest case for the pro-life movement in two generations,” said Marjorie Dannenfelser, president of the Susan B. Anthony List, an anti-abortion group that sponsored Pence’s speech and plans to spend $10 million on TV and digital ads in Washington, D.C., and battleground states to promote the case.

“I think this is that moment of time we’ve all been waiting for,” said Heather Weininger, executive director of Wisconsin Right to Life, an anti-abortion nonprofit in the battleground state. “This is really the pinnacle moment where we can go back to those days where we protect life at the moment of conception.”

Weininger said the issue is likely to be “crucial” in her state in the midterms, especially given that it has a GOP-controlled legislature and a Democratic governor, Tony Evers, who is up for reelection. U.S. Sen. Ron Johnson, a Wisconsin Republican, has not yet made a decision on whether he will seek another term, but he has suggested this may be his last, and Rep. Ron Kind, a Wisconsin Democrat, is seen as particularly vulnerable.

“If this decision comes out next summer, this is going to be a key issue in all those races,” Weininger said.

If Roe were to be overturned or severely curtailed, it would be thanks to former President Donald Trump, a most unlikely person to have helped social conservatives achieve their long-awaited goal. Trump ran in 2016 promising to nominate justices who would overturn Roe — a pledge that helped the thrice-married former reality TV star win the support of prominent evangelical leaders as well as other conservatives.

It remains to be seen how motivating the issue will be politically. In the Virginia Governor’s race — the biggest election of the year — only 6% of voters called abortion the most important issue facing the state, according to AP VoteCast.

Still, Republicans have been eager to seize on the issue, especially as they jockey for support heading into 2024.

On Monday, South Dakota Gov. Kristi Noem, another potential presidential candidate, promised that if the state loses an appeal in a legal fight over a law that would require women seeking abortions to first consult with crisis pregnancy centers, which generally advise women not to get abortions, she would try to get the Supreme Court to consider the case.

“We have a couple of opportunities here to make a case to undermine and remove Roe v. Wade,” said Noem, who also signed onto a legal argument in the Mississippi case.