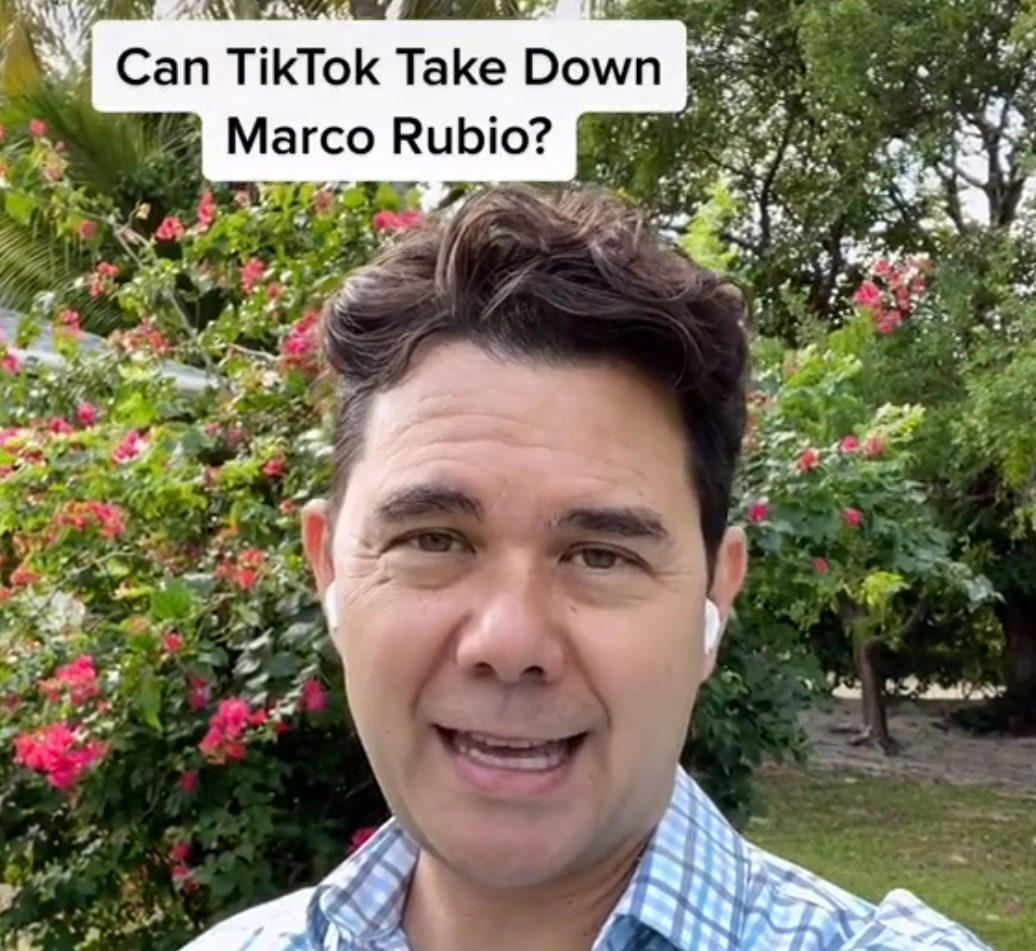 'I was just telling my story, and then suddenly donations started coming in...'

Russell told Florida Politics his following on the social media platform grew tenfold in December after a video he posted went viral.

The unedited snippet features Russell, a Democrat, telling the camera he believes TikTok can affect the outcome of a federal election and running through his campaign priorities, personal background and political history.

“I wasn’t on there asking for money. I was just telling my story, and then suddenly donations started coming in and people started asking, ‘Where can I donate?’ And that pushed us over $1 million,” he said. “This is a very fun group of folks who are excited and passionate about seeing Marco Rubio out of office, and they’ve come through. I’ve had more views on my last couple TikTok videos than the votes it takes to win a Primary Election.”

As of Monday evening, Russell’s TikTok account has more than 22,000 followers.

Russell said it has been difficult to measure the exact number and quantity of campaign donations he has received as a result of his TikTok videos, but he attributes a significant uptick in smaller donations to his grassroots campaign to his activity there.

The platform — which Rubio and other Republicans, including former President Donald Trump, have tried to ban in the U.S., citing possible threats and influence by the Chinese government — is a potentially powerful tool through which politicians can reach young voters.

In December, TikTok overtook Google as the most popular website on the internet, leapfrogging other popular domains like Amazon, Apple, Facebook and Netflix to climb six places from where it sat around the same time in 2020, according to web security company Cloudflare.

As TechCrunch reported, TikTok this year is poised to become the world’s third-largest social network, just behind Facebook and Instagram, with an expected 755 million monthly users.

But for politicians its potential remains largely untapped, Russell said.

“In the last cycle, Facebook really ruled messaging in the political sphere. TikTok is a lot trickier,” he said. “It’s a very fickle audience that doesn’t like to be pandered to through blatant advertising. So, if you can speak their language and get their attention yet convey a message that brings them on board — it’ll be interesting to see which candidates take advantage of that.”

Aside from three local union donations from the Miami Fraternal Order of Police, International Brotherhood of Electrical Workers and Miami Association of Firefighters, all of Russell’s campaign gains have come from individuals.

Russell’s fundraising receipts show him raising more than $756,000 through Sept. 30, with contributions ranging from $100 to $2,900, the max allowable for each of the General and Primary elections.

Russell said 82% of the donations he has accepted since launching his campaign for Senate in early June have come from Florida. Of those, half have been for less than $500 when accounting for his recent haul.

Crossing the $1 million mark is an important milestone, he said, because it refutes the assumption some have that the Primary Election will be all but a formality for Democratic U.S. Rep. Val Demings — who raised $13.5 million through Sept. 30 — to be crowned the victor.

“For the general voter, there may be the thought that this Primary was already a foregone conclusion, but they’ll be pleasantly surprised, I think, to see a grassroots candidate who is gaining enough traction and strength,” he said. “The hard part about taking on Marco Rubio is finding that balance. Either you’re the hand-tapped Washington favorite or you’re a grassroots candidate that’s finding trouble getting the funds, recognition and press. It’s a hard needle to thread because it’s great to be a grassroots candidate, but if you don’t have the resources to get your message out, hit the road and put gas in the tank, you’re never going to get out of the weeds.”

Democrats are losing ground in Florida both in representation and in voter rolls. For the first in history, registered Republicans outnumber Democrats in the Sunshine State.

Part of the reason for that and why no one has beaten Rubio since his election to the Senate in 2010, Russell said, is the Democratic Party’s habit of running candidates from the so-called Washington establishment.

“I’m the only candidate in our Primary who is really dealing with specifics on infrastructure, water quality, Everglades restoration, red tide, blue-green algae, fish kills, storm surges, sea level rise and other environmental issues. These are where I as a local elected official have been let down by the federal government, where the will is there to solve these issues that Floridians have but the federal government hasn’t been there, and Marco Rubio certainly hasn’t been there, to produce results,” he said. “We know with Democrats losing their registration edge that the numbers aren’t there in Florida for a Washington Democrat singing the same old Washington song to come in and prevail. By actually traveling to all 67 counties, by physically visiting them — we’ve been to 20 so far — I’m learning what it is that 411 mayors are trying to achieve in their communities in terms of infrastructure, water quality and all these other things.

“There’s a different angle to it in every community, but there’s a role that the federal government should be playing that it’s not. That will translate into a campaign of actual accomplishments, goals and strategies that will serve Florida and not just a party, and that is what will differentiate me in the Primary and what will see me prevail against Marco Rubio.”

previousJoe Henderson: Ron DeSantis' absence could have been handled better