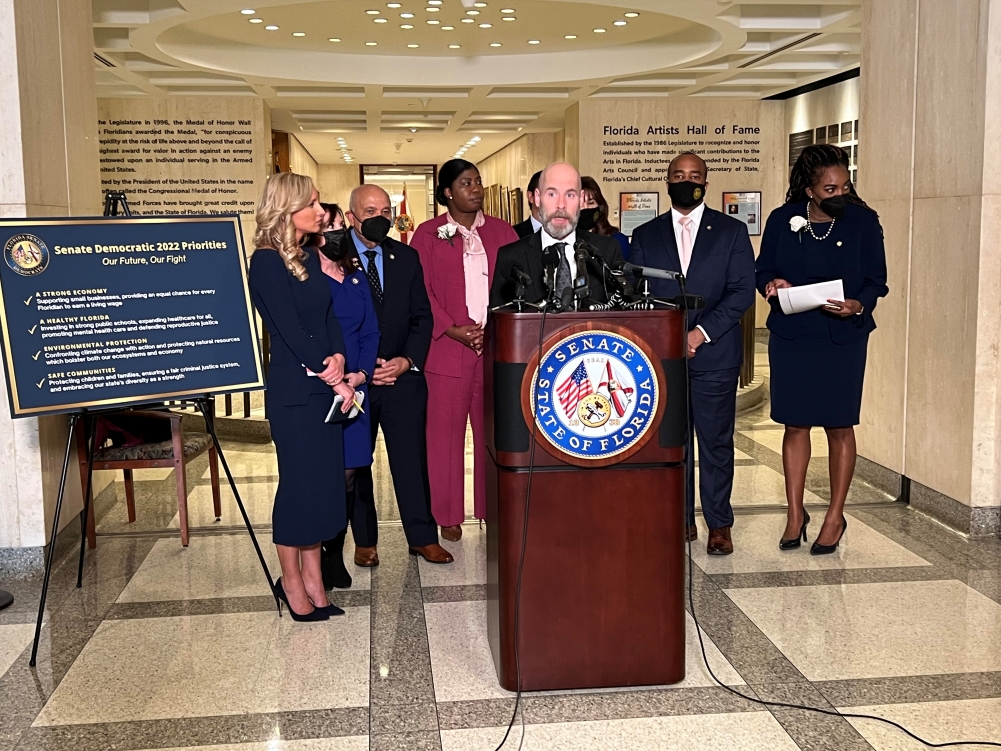 'Republicans have been running the show for 20 years, and where has it gotten us? Out-of-touch politics focused on culture wars instead of real issues facing real Floridians.'

Florida’s Democratic senators and minority House leadership challenged the vision set in Gov. Ron DeSantis’ State of the State speech that freedom for Floridians has been bolstered under his administration. Democrats also highlighted their legislative priorities for the 2022 Session.

In his Tuesday address, DeSantis lauded his administration and his party’s opposition to mask mandates, vaccine passports and school closures, labeling Florida “the freest state in the United States.” However, Democratic leaders argued their party presents a better vision for a freer Florida in two public statements aired after his speech.

“Republicans have been running the show for 20 years, and where has it gotten us? Out-of-touch politics focused on culture wars instead of real issues facing real Floridians,” Book said.

After her introduction, senators chimed in to oppose the idea that Republicans have boosted freedom in the state.

“Twenty-one million Floridians deserve strong leadership that promotes freedom and fairness. The GOP agenda takes it away from them,” Sen. Jason Pizzo said.

“Right now, the power seems to rest with the select few, those who support an agenda that flies in the very face of our nation’s core beliefs of equality and liberty — beliefs we’ve fiercely defended for 200 years,” Sen. Darryl Rouson said.

In the second video, House Democratic Leader Evan Jenne said the Democratic caucus’s goal is to protect Floridians’ freedom to be healthy, prosperous and safe. He said they would achieve those goals through targeting Medicaid expansion, a home insurance price decrease, criminal justice reform and other policy issues.

He also acknowledged the Floridians who died because of COVID-19.

“We mourn the loss of 60,000 Floridians to the COVID-19 pandemic. That somber fact should guide our focus here in Tallahassee,” he said

Jenne attacked previous legislation that has taken decision-making away from local elected officials, like the ban on school board-level student mask mandates.

“We don’t need to continue taking more and more control away from our local elected officials. You don’t need Tallahassee telling you what to do, and neither do they,” he said.

House and Senate Democrats also released a list of 24 bills that are a priority this Session. The list includes SB 374, which prohibits gay and transgender panic legal defenses and HB 199, a prohibition on assault weapons and large capacity magazines.

In a press conference after the State of the State speech, Book, Jenne and other Democratic leaders discussed what issues and bills would be the center of their caucus’s focus in 2022.

Both leaders said opposing SB 146, which bans abortions after 15 weeks, and its House version would be one of the top priorities for Democratic legislators.

“We will fight tooth and nail over that bill,” Jenne said. “There are days on the House floor and the Senate where we all get along. There are other days where it is going to be a problem and people are going to be very upset by the end of that individual day. When that bill hits the floor, it’ll be one of the latter.”

Sen. Pizzo, the Democrats’ Senate policy chair, said he was hopeful for cooperation across the aisle but cautious about how DeSantis’ influence could alter that process

“We should agree on 85% of stuff. And if we can agree on 85% of stuff, we can get a lot done,” he said. “Unfortunately for our colleagues across the aisle, they’re beholden to whatever the whim, the wishes are of the Governor. And very often we don’t get to focus on what’s concrete.”

He also criticized the Governor for bragging about budget reserves in his speech.

“He talked about how Florida is free, how we’re open and bragging about a $15 billion reserve, and 15-year-olds are killing 15-year-olds and 9,000 kids in Miami-Dade County K-12 are homeless,” Pizzo said. “Don’t brag about $15 billion in reserves when you have kids who don’t know where they’re sleeping tonight or where they’re eating.”

Despite their opposition to DeSantis’ messaging and influence, Democrats lack the numbers to push back using force. Book said that although her caucus is smaller, its members will continue to fight fiercely for the legislation they want to pass.

“I can’t change numbers. And I can’t make us bigger than we are today. But I can make sure that we bring reason — smart, strategic arguments — to the floor, and bring people over,” she said.