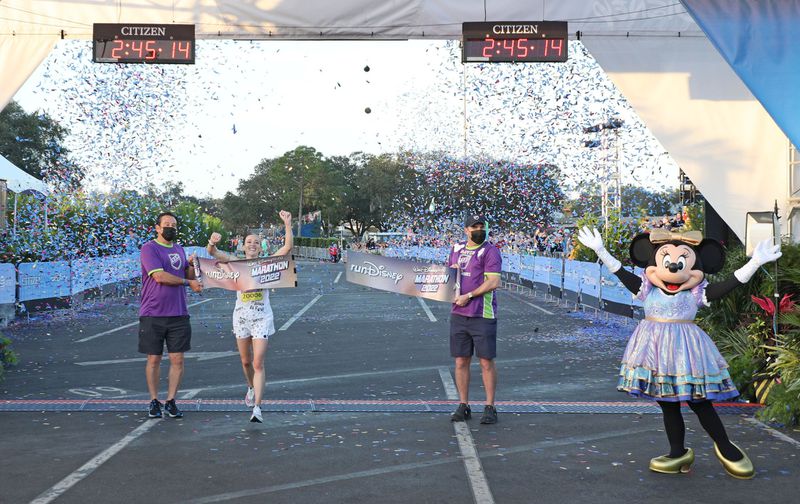 Brittany Charboneau is the first to win all four races in the so-called 'Dopey Challenge.'

On paper, no doubt Brittany Charboneau is a serious runner.

The Denver-based professional runner sometimes logs 100-mile training weeks and once competed in hopes of going to the Olympics.

But in Orlando, she was all fun as she made history recently.

Charboneau, 33, was the first person to sweep all the races — the 5K, 10K, half marathon, and the crown jewel, the 26.2-mile marathon — at Walt Disney World this month. It was the first time anyone has ever won the entire race series in runDisney’s 29-year history. She won the Dopey Challenge, the nickname given to anyone who runs the 48.6 miles over the four days.

“Completing runDisney’s popular but grueling Dopey Challenge is an amazing feat. But Charboneau took it one step further,” according to a runDisney news release.

And Charboneau did it while racing in Disney costumes. In one race, she crossed the finish line dressed as Elsa from “Frozen.” In another, her hair was spray painted black-and-white as the villain Cruella de Vil from “101 Dalmatians.”

What got Charboneau to Orlando had been a freak injury.

This fall, Charboneau was in the final training workouts before the Boston Marathon when a Siberian Husky off-leash ran into her, leaving her with a concussion and a back injury.

Charboneau competed in the Boston Marathon, still feeling injured. “My body was like, ‘Nope. Not having it,’” she said. She quit at Mile 18.

After that, Charboneau and her coach brainstormed what was next. She didn’t want her hard training to go to waste.

That’s how Charboneau signed up for the Dopey Challenge, which once seemed so “absurd.”

Her goal wasn’t to win them all. “I just wanted to have fun,” Charboneau said. “I wanted to do something different.”

She practiced running on tired legs. She also reminded herself to hold back, to save her legs for the final, toughest race: the marathon.

As the lead runner, she didn’t take herself too seriously at the Disney races. She waved at the costumed Timone character from “Lion King” on the course. Her blistering pace didn’t stop her from getting excited to see Woody and Forky from the “Toy Story” series cheering her on.

“I was like, ‘I don’t want to do all these races and not remember the fun, everything I love about Disney.’ So I made it a point to collect these different moments throughout each race. And then after the races, I would come home and journal about what I remembered,” Charboneau said.

Professional runners get tired legs too. It wasn’t always magical, even though she ran by a castle and princesses. She felt the doubt and exhaustion in the later miles, lagging in second place for most of the marathon.

Around Mile 16, “it started to get really hard … I was starting to get down like, ‘I don’t know if I’m going to be able to win. I’ve come this far. … Right as I was in this negative mindset, we started to come into the Animal Kingdom and ‘Hakuna Matata’ was playing,” Charboneau said.

“Hakuna Matata, ain’t no passing craze. It means no worries for the rest of your days. It’s our problem-free philosophy.”

The song was the mantra she needed.

With the sun coming up, Charboneau crossed the marathon finish line first.

There was no special trophy for winning the Dopey Challenge, Charboneau said.

“They didn’t really have anything prepared because they were like, ‘We don’t know what to do,’” Charboneau explained.

But the next day, Disney took her on a VIP tour of the four theme parks and she celebrated with a Mickey ice cream bar. “That was the coolest thing,” Charboneau said.