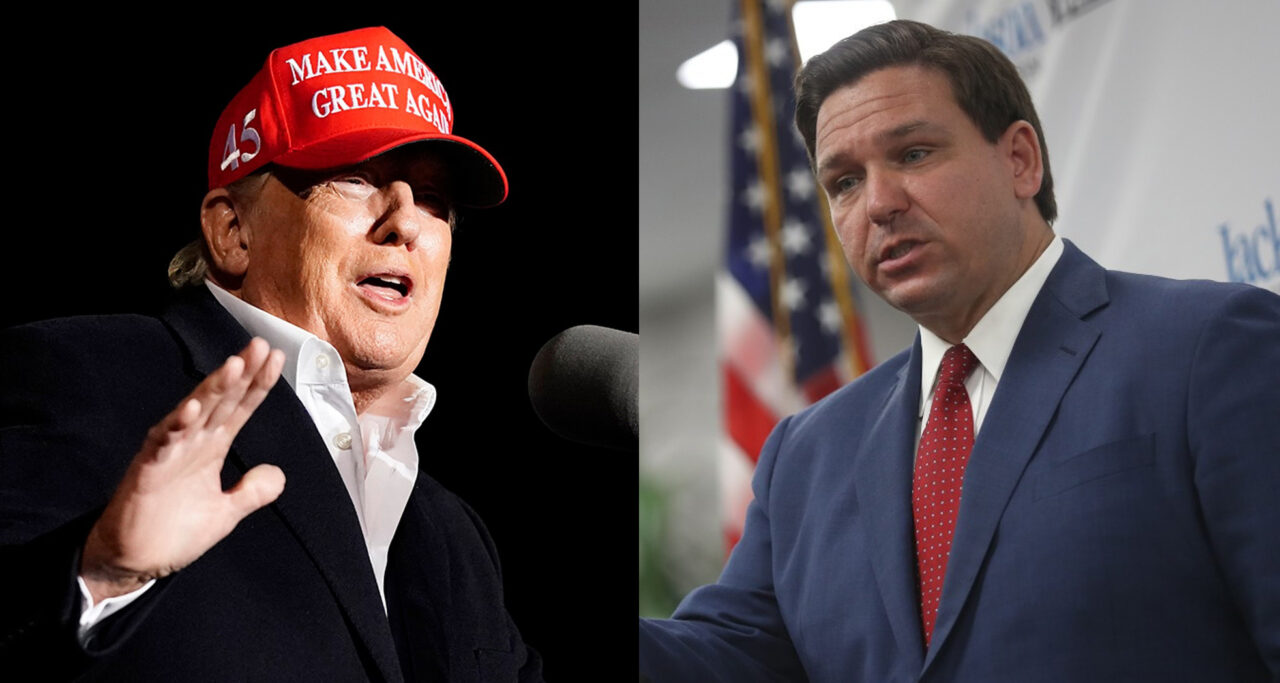 'DeSantis would be a formidable 2024 candidate in the Trump lane should Trump not run.'

For months, former President Donald Trump has been grumbling quietly to friends and visitors to his Palm Beach mansion about a rival Republican power center in another Florida mansion, some 400 miles to the north.

Gov. Ron DeSantis, a man Trump believes he put on the map, has been acting far less like an acolyte and more like a future competitor, Trump complains. With his stock rising fast in the party, the Governor has conspicuously refrained from saying he would stand aside if Trump runs for the Republican nomination for President in 2024.

“The magic words,” Trump has said to several associates and advisers.

That long-stewing resentment burst into public view recently in a dispute over a seemingly unrelated topic: COVID-19 policies. After DeSantis did not reveal whether he had received a COVID-19 booster, the former President publicly acknowledged he had. Last week, he seemed to swipe at DeSantis by blasting as “gutless” politicians who dodge the question out of fear of blowback from vaccine skeptics.

DeSantis shot back on Friday, criticizing Trump’s early handling of the pandemic and saying he regretted not being more vocal in his complaints.

The back and forth exposed how far Republicans have shifted to the right on coronavirus politics. The doubts Trump amplified about public health expertise have only spiraled since he left office. Now his defense of the vaccines — even if often subdued and almost always with the caveat in the same breath that he opposes mandates — has put him uncharacteristically out of step with the hard-line elements of his party’s base and provided an opening for a rival.

But that it was DeSantis — a once-loyal member of the Trump court — wielding the knife made the tension about much more.

At its core, the dispute amounts to a stand-in for the broader challenge confronting Republicans at the outset of midterm elections. They are led by a defeated former President who demands total fealty, tolerates no criticism and is determined to sniff out, and then snuff out, any threat to his control of the party.

That includes DeSantis, who has told friends he believes Trump’s expectation that he bend the knee is asking too much. That refusal has set up a generational clash and a test of loyalty in the de facto capital of today’s GOP, one watched by Republicans elsewhere who’ve ridden to power on Trump’s coattails.

“They’re the two most important leaders in the Republican Party,” said Brian Ballard, a longtime Florida lobbyist with connections to both men, predicting Trump and DeSantis “will be personal and political friends for the rest of their careers.”

Trump’s aides also have tried to tamp down questions about the former President’s frustrations, so as not to elevate DeSantis.

Still, Trump has made no secret of his preparations for a third run for the White House. And while DeSantis, who is up for re-election this year, has not declared his plans, he is widely believed to be eyeing the presidency.

Trump and his aides are mindful of Republicans’ increasingly public fatigue with the drama that trails Trump. The former President’s false claims about fraud in the 2020 election — which DeSantis has not challenged — and his role in the events leading to the Jan. 6 riot at the Capitol have some Republicans looking for a fresh start.

DeSantis is often the first name Republicans cite as a possible Trump-style contender not named Trump.

“DeSantis would be a formidable 2024 candidate in the Trump lane should Trump not run,” said Dan Eberhart, a Republican donor. “He’s Trump but a little smarter, more disciplined and brusque without being too brusque.”

Notably, Trump, a longtime student of charisma and mass appeal, as well as an avid reader of polling, has refrained so far from publicly attacking DeSantis, who is a distant but potent second to him in polls on the 2024 GOP field.

His restraint is a break from the mockery and bullying he often uses to attack Republicans he perceives as vulnerable. Trump made no reference to the Governor at a rally in Arizona on Saturday.

DeSantis has $70 million in the bank for his re-election, an account he stocked with help from the Republican rank-and-file and donor class, alike. He has raised his profile in the same spaces Trump once dominated. The Governor is ubiquitous on Fox News, where he is routinely met with the sort of softballs that once arched toward Trump.

DeSantis was a little-known Florida congressman in 2017, when Trump, who was then the President, spotted him on television and took keen interest. DeSantis, an Ivy League-educated military veteran and smooth-talking defender of the new President, was exactly what Trump liked in a politician.

It wasn’t long before Trump blessed DeSantis’s bid for Governor and sent in staff to help him, lifting the lawmaker to a victory over a better-known rival for the party’s nomination.

DeSantis survived the General Election and has often governed in a style that mirrors his patron, slashing at the left and scrapping with the news media. But that alone doesn’t placate Trump. As with other Republicans he has endorsed, the former President appears to take a kind of ownership interest in DeSantis — and to believe that he is owed dividends and deference.

“Look, I helped Ron DeSantis at a level that nobody’s ever seen before,” Trump said in an interview for a forthcoming book, “Insurgency,” on the rightward shift of the Republican Party, by New York Times reporter Jeremy Peters. Trump said he believed DeSantis “didn’t have a chance” of winning without his help.

The former President’s expectation of deference from DeSantis is a reminder to other Republicans that a Trump endorsement comes with a price, a demand that could prove particularly consequential should he run again and have a stable of Republican lawmakers in his debt.

At times, Trump has sought to kindle his relationship with DeSantis. He has suggested the Governor would be a strong choice for Vice President. Similar courtship has helped win deference from other potential rivals. But DeSantis has not relented.

“I wonder why the guy won’t say he won’t run against me,” Trump has said to several associates and advisers, who spoke on condition of anonymity to describe private conversations.

Trump began the recent dust-up by attacking the Governor’s refusal to acknowledge whether he had received a COVID-19 booster shot.

“The answer is ‘Yes,’ but they don’t want to say it, because they’re gutless,” Trump said in a television interview this month, referring only to “politicians” but clearly alluding to DeSantis. “You got to say it — whether you had it or not, say it.”

DeSantis’s response came on Friday in an interview on the conservative podcast “Ruthless.” The Governor said one of his biggest regrets was not forcefully opposing Trump’s calls for lockdowns when the coronavirus first began to spread in spring 2020.

“Knowing now what I know then, if that was a threat earlier, I would have been much louder,” DeSantis said.

DeSantis then moved quickly to place blame on Dr. Anthony Fauci, who advised Trump on the country’s COVID-19 response, a much safer target with conservatives.

The former President did not immediately respond. Without a Twitter account, his hair-trigger retorts have become less frequent. A spokesman for Trump also did not respond to requests for comment. An adviser to DeSantis declined to comment.

DeSantis, however, has touched on a delicate issue, one of the few on which Trump is out of tune with his party’s hard-liners: the efficacy of the vaccine and deference to public health experts’ advice on how to curb the spread of the virus.

In an interview with Candace Owens, a right-wing media personality, the former President said “the vaccine worked” and dismissed conspiracy theories. “People aren’t dying when they take the vaccine,” he said.

DeSantis, though, has been much more eager to focus on his resistance to COVID-19 restrictions, than to make a case for vaccination and booster shots.

Trump’s loudest antagonists are likely to continue to stoke the tension between the two men. Ann Coulter, the conservative commentator who has fallen out with the former President, delighted in the dust-up this week.

“Trump is demanding to know Ron DeSantis’s booster status, and I can now reveal it,” Coulter wrote on Twitter. “He was a loyal booster when Trump ran in 2016, but then he learned our President was a liar and con man whose grift was permanent.”

In an email, Coulter, herself a part-time Florida resident, put a finer point on what makes DeSantis’ rise unsettling for the former President. “Trump is done,” she wrote. “You guys should stop obsessing over him.”

via Jonathan Martin and Maggie Haberman of The New York Times.