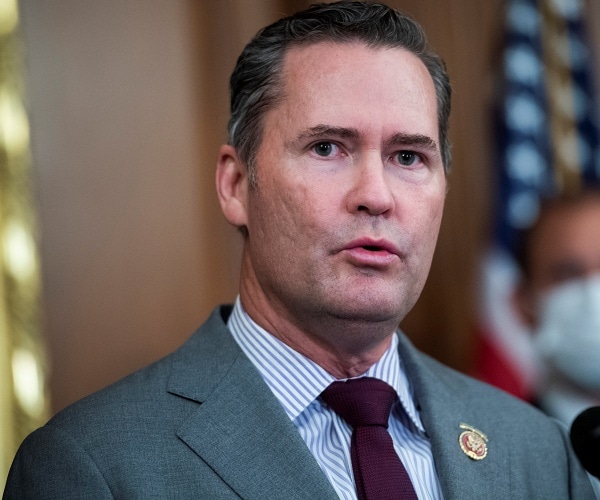 'I'm very concerned about the safety of our athletes,' Waltz said.

Waltz, of St. Augustine Beach, and Wexton — both longtime and leading critics of China’s human rights policies — all but conceded there is little chance of passing such a bill before the Olympics begin Feb. 4 in Beijing.

Yet they suggested that their bill not only offers a prospect for influencing future Olympic decisions, but could add immediate pressure to the Olympic organizers, NBC and American corporate sponsors to address human rights issues in China, including China’s ongoing genocidal oppression of the Uyghur people, during the games’ broadcasts.

Wexton referred to the upcoming Winter Games as the “Genocide Olympics.”

Waltz, who last year called for the United States to boycott the Beijing Olympics, expressed strong concern for any American athletes who, while in China, might speak out individually about human rights — an option the IOC suggested for any objecting to the Olympics being there. He expressed fear they could be found in violation of Chinese law and imprisoned.

“I’m very concerned about the safety of our athletes,” Waltz said.

Wexton said she met with NBC officials to urge them to either pull out or at least offer counter programming to call attention to the human rights violations.

“I don’t want to see Hoda (Kotb) and the crowd from NBC gushing about what a wonderful spectacle it is, and not talking about what’s happening behind the scenes, the genocide that is taking place in Xinjiang.”

She said NBC officials assured her that the network strongly advocates human rights and would not hesitate to speak out during the broadcasts, but could do little else, because of its contract.

Waltz said the IOC likewise told Congress that athletes should be able to express their own concerns “in their own private capacity in press conferences, in their hotels or in other places.”

“Now the Chinese Olympic authority is making it clear that is not welcome, and in violation of Chinese law. So where does the OIC stand in support of its own bylaws?” he added.

Noting the disappearance of a Chinese professional tennis player last summer after she spoke out, Wexton added, “The IOC is not going to protect those athletes who do choose to speak out. If anything, that is what I am concerned about after the way they treated Peng Shuai.”

“I would not put it past them (Chinese officials) at all to put our athletes in prison,” Waltz continued. “It is not only the IOC, but I think the U.S. Olympic Committee has a responsibility. And frankly the (Joe Biden) administration, who has rightly called for a diplomatic boycott but not a full (boycott), should share some responsibility.

“I’m very concerned about the safety of our athletes if they speak out about these abuses.”

The pair held their press briefing online Wednesday afternoon to announce their bill and to lay out why they believe the OIC should not be eligible for hundreds of millions of dollars of American tax breaks. They argued the Olympic Committee has violated its registration as a 501(c)(4) social welfare organization in the United States by turning a blind eye to China’s human rights record.

Waltz noted that NBC’s contract with the IOC alone is worth $7.5 billion, so he said the tax breaks would be enormous.

“It is very clear to me as the IOC continues in these human rights abuses, as an accomplice to the abuses of the (Chinese Communist Party), that they are not a charitable organization, that they are not deserving of tax exempt status and taxpayer dollars should not be subsidizing their actions,” Wexton said.