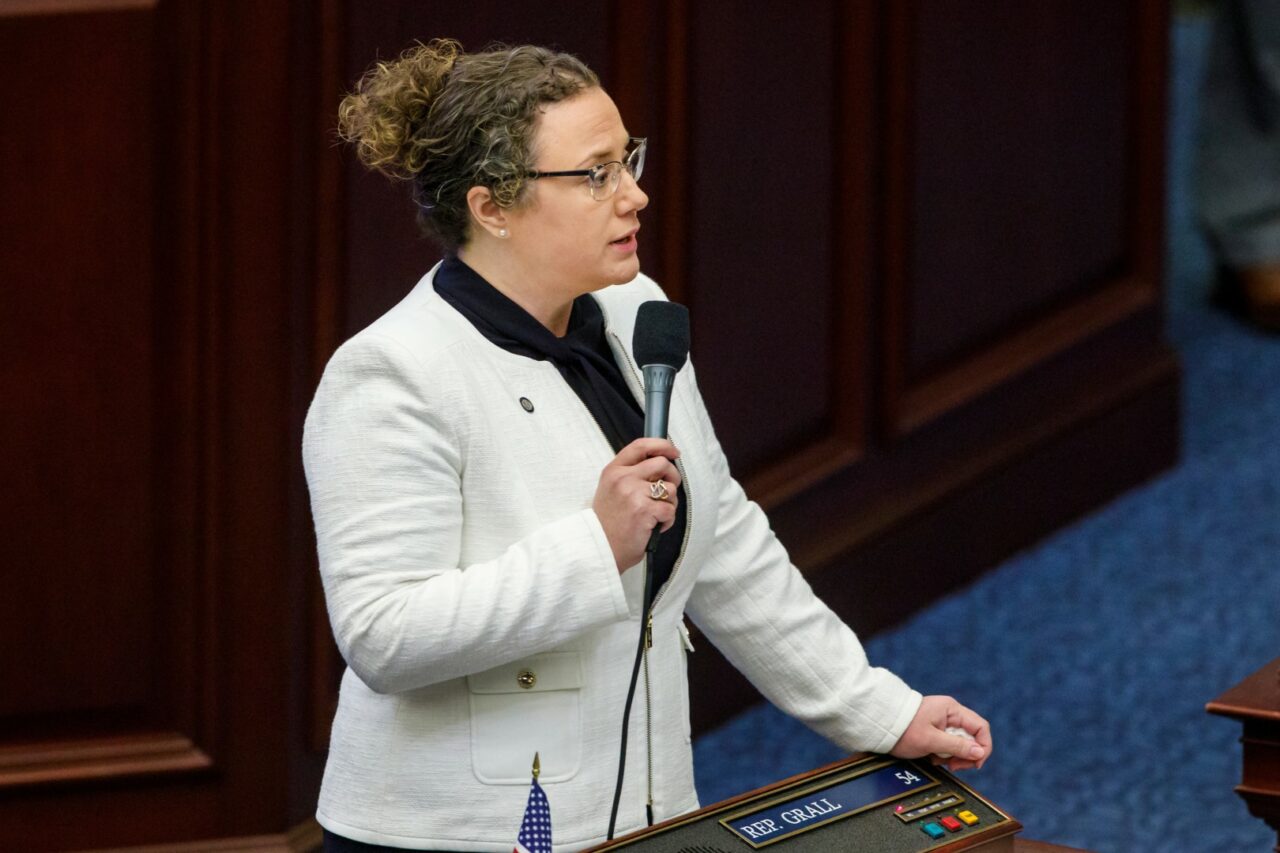 'Let us speak,' many protesters chanted.

A House committee advanced a bill Thursday that would ban abortions in Florida after 15 weeks, despite Democratic lawmakers decrying the measure and activists interrupting the meeting with chants and shouts.

Lawmakers listened to more than an hour of public testimony on the proposal (HB 5), underscoring the bill’s contentious nature and the nation’s ongoing divisions over abortion rights.

But when Health Care Appropriations Subcommittee Chair Bryan Avila cut public testimony short, he struck a nerve among a handful of activists occupying the room.

“Let us speak,” they chanted as security personnel escorted a speaker outside of the room.

Security later cleared everyone from the room, prompting many attendees to huddle around a nearby television. Press and staff rejoined the meeting moments afterward.

By design, the proposal would test the limits of Roe v. Wade. It is similar in nature to a Mississippi law currently under the review of the U.S. Supreme Court. A judgment is expected in June.

As the committee focused on the bill’s fiscal impacts, Democrats — led by Orlando Rep. Carlos Guillermo Smith — challenged Grall on future litigation costs the measure could cause.

The bill, Guillermo Smith noted, is unconstitutional under current law, contending it also threatens to bring a wave of lawsuits against Florida.

Grall disagreed, saying the costs are Mississippi’s cross to carry.

“I believe that we will reap the benefit of the cost that Mississippi is extending in out to litigate it before the Supreme Court,” she said. “And should it not be upheld at the Supreme Court, it is likely that our bill would be struck down at that time.”

Florida law currently prohibits abortions during the third trimester — which the law says begins at the 24th week of gestation — with certain medical exceptions.

Many Republican-led states are challenging abortion rights nationwide. In October, Texas enacted one of the strictest abortion laws in the nation, making the procedure illegal after a fetal heartbeat is detected, usually around six weeks. West Virginia, meanwhile, introduced legislation to impose a 15-week abortion ban earlier this month.

However, the Republican effort to limit abortion in Florida is tucked within a multipronged proposal.

The bill would loop pregnant women into a tobacco education program, among other provisions. It also would create an infant mortality review process, bolster infant mortality-reduction initiatives, and enhance Florida’s abortion reporting requirements to include instances of human trafficking.

Florida, proponents of the measure note, ranks 18th nationally in infant mortality. Persons-Mulicka successfully proposed an amendment that boosted funding to create the fetal and infant mortality review committees. The new price tag: $1.6 million instead of $260,000.

“This appropriation … focuses again on what I would say is the most important calling we could have, and that is fighting so that every child can have the opportunity to live, to succeed, and find their own dreams,” said Persons-Mulicka in her closing.

Outnumbered Democrats, meanwhile, proposed several amendments of their own without success. Among them, Smith offered a late amendment that he coined as the “Clinic Protection Act.”

The amendment would’ve levied penalties against those who “intimidate” or otherwise threaten those seeking an abortion near a facility. It also would allow victims to seek damages.

Smith said he filed the amendment after nine people were arrested in Fort Myers on Thursday after they attempted to breach a Planned Parenthood site as a form of protest.

Democrats, including Rep. Kelly Skidmore of Boca Raton, urged Republicans to sign on.

“After the events of Jan. 6, an angry mob should scare everyone one of us,” she said.

Many of the attendees who spoke against the proposal argued the bill is pushed primarily by White men rather than women. Many more vowed they and colleagues would soon vote Republicans out of the Legislature. North Carolina, they noted, would be the nearest alternative to Florida if the measure is passed.

Republican Rep. Michelle Salzman of Pensacola took issue with the assertion. In closing remarks, she defended her support of the bill by sharing a personal story about her time serving overseas. While deployed to Bosnia with the Army, Salzman said a military officer within her quarters raped her. The officer, who was later convicted, climbed on top of the then 18-year-old and covered her mouth so she could not speak. Abortion, she emphasized, was never considered.

“It is imperative that in the testimony and the debate, that you understand that I do have a perspective and experiences that can relate to circumstances and examples used as reasons to obtain an abortion,” she said. The bill makes no provisions for rape, domestic violence, or human trafficking victims.

The proposal will appear next before the Health & Human Services Committee. If signed into law, it will take effect July 1.

nextTampa Bay saw its worst red tide in 50 years. How much blame does the Piney Point spill get?