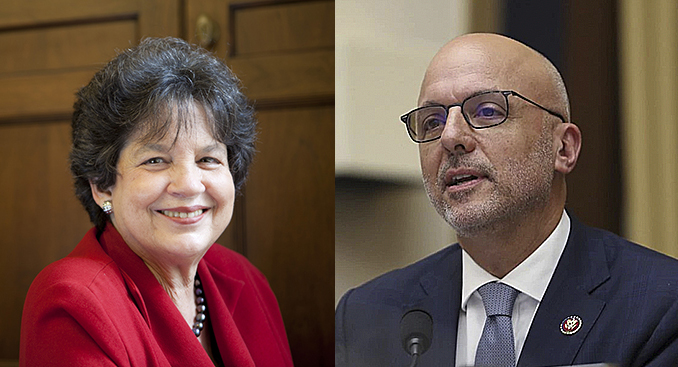 'I'm proud to be part of Team Michelle.'

Two members of Congress representing parts of Palm Beach County are endorsing Michelle Oyola McGovern as she seeks a seat on the County Commission.

U.S. Reps. Ted Deutch and Lois Frankel are supporting McGovern, who is a veteran of former U.S. Sen. Bill Nelson’s office. She spent more than a decade working as Nelson’s regional director in West Palm Beach, then served as Nelson’s state director.

“Michelle Oyola McGovern will be a great County Commissioner,” Deutch said in a written statement.

“For 17 years, I have worked with Michelle to support Palm Beach County families, seniors, and children. As a mother, executive leader, and community advocate, Michelle brings diversity and vision to keep moving Palm Beach County forward. I have seen Michelle in action — she is a force for good with a heart for public service. I’m proud to be part of Team Michelle.”

McGovern, a Democrat, is one of four candidates looking to succeed term-limited Commissioner Melissa McKinlay. McKinlay already has endorsed McGovern as her preferred successor.

“I trust Michelle Oyola McGovern to serve as our next Palm Beach County Commissioner for District 6. As a mom, executive, and public servant, Michelle is qualified and prepared for the job ahead,” added Frankel, who also is a former West Palm Beach Mayor.

“I have known Michelle for over 20 years and have worked with her during my time as Mayor and now in Congress. Michelle understands the district, knows the issues, and is a leader our community has turned towards to solve local challenges — I know I have. From fighting for women and families to supporting small businesses and farmers, to advocating for first responders and front-line workers, Michelle McGovern is a proven leader and the advocate we need today.”

McGovern is facing her toughest competition from state Rep. Matt Willhite, also a Democrat. McGovern has raised an impressive cash haul, but still slightly trails Willhite in cash on hand, thanks to Willhite’s leftover bankroll from prior House runs.

Sylvia L. Sharps, a former Commission candidate, is a third candidate seeking the Democratic nomination. Sara Baxter, a real estate agent, is the only Republican running so far.

McGovern has courted endorsements from other nearby local leaders during her run. Now, two of the three Democratic members of Congress representing the county are getting behind McGovern’s bid.

“I am honored to have the support of two great public servants with long track records of making a difference in the lives of Palm Beach County residents,” McGovern said.

“Over the last 20 years, I have worked with Congresswoman Frankel and Congressman Deutch on a wide range of issues, including seniors, agriculture, economic development, water quality, and women’s health.”

previousSunburn — The morning read of what’s hot in Florida politics — 2.3.22