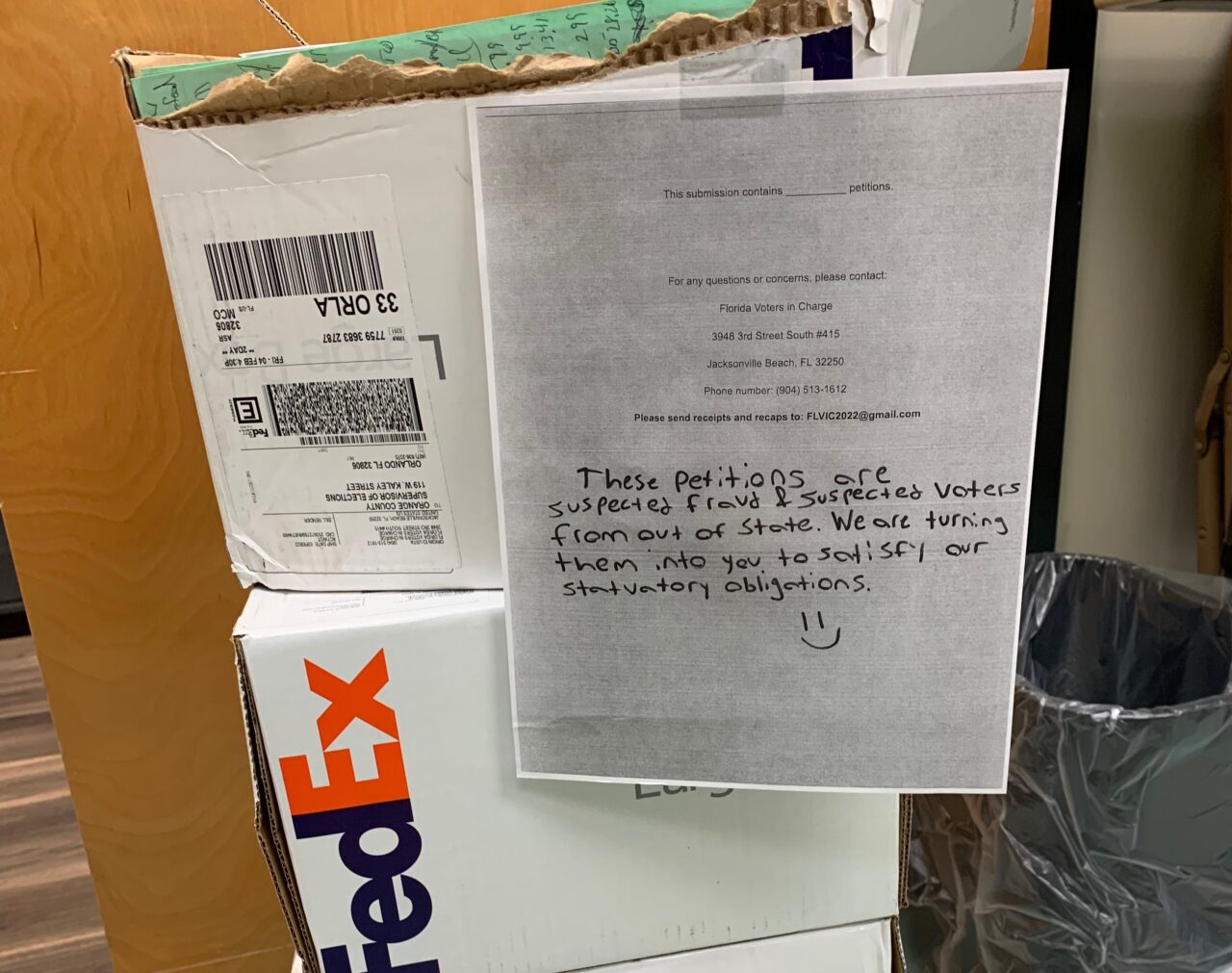 Increasing reports of alleged petition frauds and a massive petition failure rate are leading county supervisors of elections around the state to say they have never seen a petition drive as bad as the one that just concluded involving proposed North Florida casinos.

At least two law enforcement investigations have been opened, in the 1st and 5th Judicial Circuits. Others are being requested in other parts of Florida.

Several supervisors told Florida Politics Monday their alarm over the drive conducted by Florida Voters In Charge — an organization backed by the Las Vegas Sands Corp. of Nevada —  is not just because of the many allegations of  individual petition fraud emerging here and there. It’s also because the drive’s unprecedented petition failure rate of perhaps 60-70% or higher suggests many hundreds of thousands of bad petitions were submitted.

Florida Voters In Charge has acknowledged that there have been reports of widespread fraud in the petition drive. The committee raised the possibility of a few bad individual petition circulators and welcomed investigations of them.

The group’s spokesperson, Sarah Bascom, said the committee has been encouraging “a thorough review and intend to turn over all information to prosecutors and investigators to examine these petition gatherers.” She contended that if there has been any fraud,  Florida Voters In Charge would be the victim.

The elections supervisors who spoke to Florida Politics suggested a problem far greater than a few bad petition gatherers.

“I’ve been conducting elections for over 30 years. This is by far one of the worst run that I have ever seen,” said Marion County Supervisor of Elections Wesley Wilcox, who is president of the Florida Supervisors of Elections association.

Bennett said he intends to provide the Manatee County Sheriff with evidence his office found of alleged petition fraud.

Cowles said he also is preparing to submit, “to state and local agencies,” possible evidence of fraud found by his office.

Reports began breaking late in January — late in the campaign — about fraud being suspected in a few cases involving individual petition circulators.

In Northwest Florida, the 1st Judicial Circuit State Attorney opened an investigation. Okaloosa Supervisor of Elections Paul Lux told the Northwest Florida Daily News, “It’s not uncommon to find some suspicious signatures. But this one is pretty blatant. On one page it looked like the same person had signed all the petitions.”

Through Dec. 31, 2021, the most recent date for which campaign finance materials were submitted, Florida Voters In Charge had spent more than $51 million on the effort, with $45 million of that going to GameDay Strategies.

“If there was widespread petition fraud, Florida Voters in Charge, its funders and GameDay Strategies are the victims. If the Supervisors have found fraud, we implore them to submit the circulator name, ID, and contact information to the appropriate authorities. Nobody is more interested than us to see this matter fully investigated by law enforcement.”

Florida Voters In Charge had been trying since August to collect enough verified petitions to get a proposed constitutional amendment on the 2022 statewide ballot, asking voters to allow for a proposed North Florida casino.

Last Tuesday the campaign failed to achieve the required minimum numbers of verified petitions by the state’s Feb. 1 deadline. The day before, on Jan. 31, the campaign filed its lawsuit against Lee, charging that problems with Florida law, the Secretary of State’s directives, and the way Supervisors of Elections had processed petitions, had caused the petition drive to fail.

Florida Voters In Charge was supposed to get at least 891,589 verified petitions by Feb. 1 to have a chance to get the casino proposal on the 2022 General Election statewide ballot. The total actually would have to be much higher, approaching 1 million, because Florida also requires minimum requirements for each of Florida’s 27 congressional districts.

On the deadline of Feb. 1 the campaign had only 814,211 verified petitions. There is no way to determine how many petitions never got processed before the bell.

In its lawsuit against Lee, Florida Voters In Charge contended it had turned in far more — more than 2 million petitions — and charged that its failure to get enough verified was in part a result of flaws in the law and the verification process.

Cowles said he would be surprised if even one-third of the petitions were good statewide.

Wilcox said his county’s final acceptance rate for Florida Voters In Charge petitions was about 22%.

He said the problems he saw ranged from no voter addresses to bad signatures, and from out-of-state residents to what he said appeared to be “just made up stuff.”

He said the Florida Department of Law Enforcement has talked with all five supervisors of elections in the 5th Circuit, which includes Marion, Lake, Sumter, Hernando, and Citrus counties.

“And all five of us had pretty good proof of what we believe to be fraudulent submissions,” he said.

Wilcox said the most apparent evidence of fraud his office came across was a petition signed by one Wesley Wilcox. There is only one voter registered in Marion County with that name: him, the Supervisor of Elections. Wilcox said he did not sign the petition.

Wilcox said his office also found a petition signed with his wife’s name.

“When they turned my petition in, or purportedly my petition, I’m thinking to myself, ‘Are they just that uneducated about what this is? Or do they not care?'” he said.

Bascom’s statement from Florida Voters In Charge read in part, “There is in fact reports of widespread fraud, which is why we have encouraged a thorough review and intend to turn over all information to prosecutors and investigators to examine these petition gatherers.”

“Therefore, as we have stated repeatedly,  any fraud that may have been committed would have been against the committee, the actual victim here. We welcome a thorough investigation into the circulators who defrauded this committee and determine what their ultimate motivation was,” Bascom said.

Cowles said that a post-deadline delivery of an estimated 6,000 petitions to his office included a note attached that read, “These petitions are suspected fraud & suspected voters from out of state. We are turning them into you to satisfy our statutory obligations.”

That came after huge shipments of petitions arrived without notes in the last few days before the deadline.

According to an affidavit in the lawsuit against Lee, the late deliveries included 35,362 petitions the campaign turned in to supervisors across the state for processing on Jan. 28, just three days before the deadline; and another 69,988 were turned on on Jan. 31, the day before the deadline.