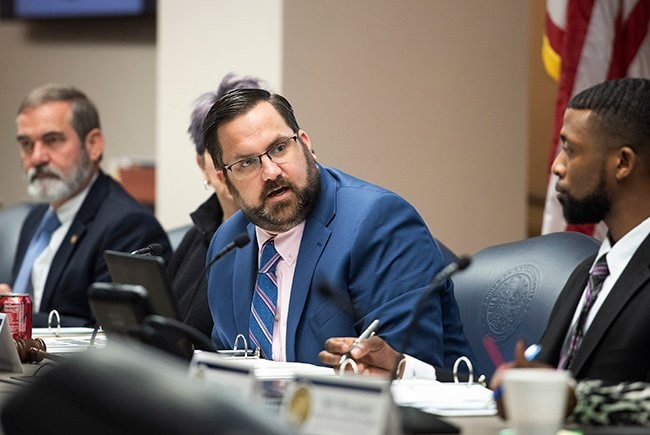 'The thought that you could change the district boundaries, without having to face the voters is ... arrogant.'

Pinellas County commissioners are pushing back on state legislation that would put single-member seats up for election in 2022 — a measure that would exclusively affect the coastal county.

The bill (HB 7061) holds a provision that requires county commissioners elected in single-member districts to run for re-election after decennial redistricting, including those elected in 2020. The proposal as written would uniquely impact Pinellas County, which alone meets the criteria under the legislation.

Some commissioners are voicing their frustrations — and concerns — about the bill and its potential to help one Pinellas County legislator who may be running for a seat on the Commission.

Commissioner Rene Flowers, who was first elected to single-member District 7 in 2020, posted a statement to her Facebook page opposing the bill.

“See this for what it is. I am not afraid of running for my seat again. What I do not like is the attempt at a sleight of hand so that an individual who would like to run for County Commission won’t have to wait another three years, instead trying to oust out someone who has been a leader and has been fair in every vote she has taken,” Flowers posted to Facebook.

Although not mentioned by name, it is likely Flowers is referencing Clearwater Republican Rep. Chris Latvala, who has made clear his intention to run for a seat on the Commission in either 2022 or 2024. While he would not be a competitor in Flowers’ district, the legislation would spark a race for single-member District 5 — currently held by Karen Seel — that Latvala could run for.

“She also shares the same political party as those who are trying to push this forward,” Flowers wrote. “When you treat good people wrong, you never prosper … it may seem like you are winning, but in the end you lose a lot.”

But Latvala, who is not listed as a sponsor or co-sponsor of the committee bill, told Florida Politics the legislation has nothing to do with a potential run, it just puts Pinellas County in line with most other Florida counties. Latvala also emphasized that the bill was proposed last year, too.

The legislator added that he is focused on his work in Tallahassee and education policy, and that he has been open about his interest in running for the Commission. He called commissioners against the legislation “arrogant” for not facing voters in response to redistricting.

“There are a number of counties during redistricting (where) the county commissioners all run again, because the lines change. The thought that you could change the district boundaries without having to face the voters is about as arrogant as thinking that 73% of voters can vote for term limits, and then you never implement it,” Latvala said.

That’s not stopping Flowers’ opposition to the bill — or to Latvala, for that matter.

“Show some integrity and drop the shenanigans. If you want to make a difference reverse the trouncing of housing dollars, assure that the unemployment system is fixed, raise salaries of state employees to true livable wages,” she continued in her post. “How about health care, how about transportation, how about education, how about small businesses, how about seeing to the proper closing of plants like Piney Point so that our water is not contaminated?”

There is also concern over the constitutionality of the legislation, because the law would cut the terms of commissioners elected in 2020 in half. That concern is written in the bill’s legislative analysis and is a flaw Pinellas County Commission Chair Charlie Justice sees in the legislation.

And, Justice said he wouldn’t be opposed to looking into the constitutionality if the bill is passed.

“I would think we would have to take a look at it. I assume that they have staff attorneys that review that in Tallahassee, and maybe there’s an avenue,” Justice said. “If there’s a legislator that’s from the Pinellas delegation that is making this happen, they should stand up, put their name on it and explain why they’re doing it.”

Florida Politics reached out to Seel but did not receive a response by the time of publishing.