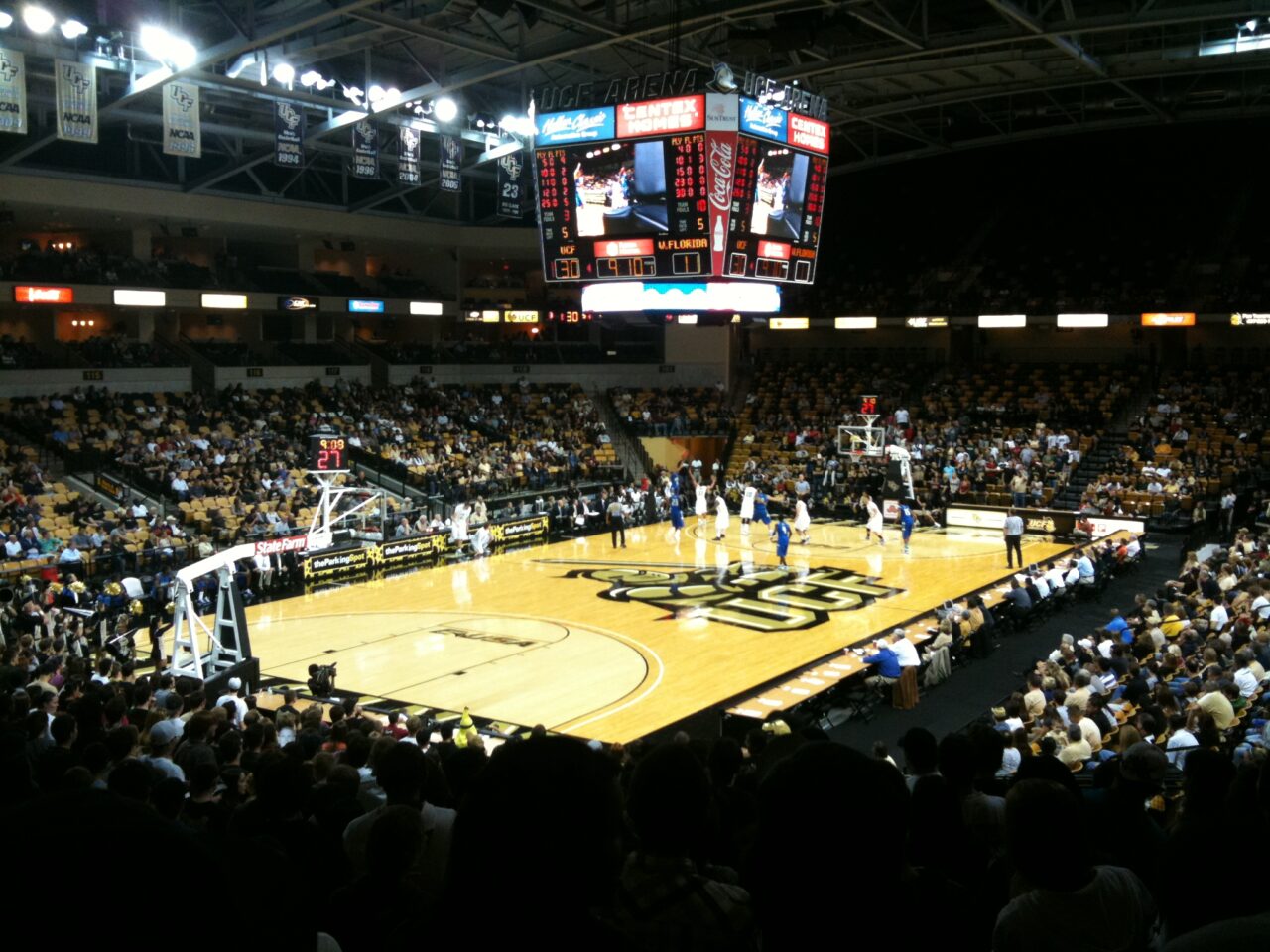 These violations placed the university in jeopardy of losing a naming partner and related sponsorship revenues.

Back in 2018, the University of Central Florida went through a scandal for misspending millions of dollars on construction projects. The debacle cost the school its president, who resigned in early 2019.

More problems from that era are still resurfacing years later, according to new documents released by the university after a Florida Politics public records request.

This time, a UCF investigation found a near fiasco over the basketball arena’s lucrative naming rights as well as a powerful organization within UCF meeting secretly and transferring money around to give the optics of better finances, according to a UCF audit investigation report released Nov. 19, 2021.

The UCF investigation was sparked by a whistleblower’s March 2019 complaint and done with the help of the Inspector General for the Florida Board of Governors, the report said.

UCF spokesman Chad Binette said in a statement, “Before this report was issued, UCF’s new administration had already adopted many stronger policies and internal controls as part of its commitment to ensuring appropriate financial practices, transparency and proper engagement with the Board of Trustees. Almost all of the issues involved in the report occurred in 2018 and 2019, and they mostly involve employees who are no longer with UCF.”

The unnamed whistleblower criticized the investigation’s findings as “too little, too late,” coming more than two years after the person’s concerns were first reported. The whistleblower also said the report did not lay enough blame on who was responsible for the problems, according to the whistleblower’s heavily redacted June email released by UCF.

The audit report said the UCF Athletics Association violated the naming rights agreement for the Addition Financial Arena where the basketball team plays and concerts and graduations are held.

“These violations placed the university in jeopardy of losing a naming partner and related sponsorship revenues,” the UCF audit report said, detailing the two problems in 2017 and 2018.

In 2017, Ken Dixon‘s $5 million gift to the school over 10 years became the largest cash pledge ever by an individual UCF alumnus. The report said that the gift was to name the Athletics Village where the major UCF sports facilities are located, and that Dixon’s name be prominently put on the front of arena event tickets.

To correct that violation, the athletics association backtracked and reissued tickets, so both Dixon’s name and Addition’s logo were equally displayed on the tickets.

Deputy Athletics Director Mark Wright said he believed it would be OK to put someone’s name on the tickets since it wasn’t a competing corporation with Addition, the report said — which noted except for Wright, everyone else who signed the Dixon naming rights contract had left the university. That included then-President John Hitt, then-Athletic Director Danny White and then UCF Foundation CEO Mike Morsberger.

The next violation happened when UCF added the logo for a company called Jasper on the basketball court hardwood floor, the report said.

“Only after Addition sent a default notice to the university on 12/6/18 did (the athletics association) work to resolve the violation,” the report said.

To fix it, the athletics association stuck another Addition logo on the court floor baselines.

UCF didn’t contact Addition to discuss the Dixon or Jasper sponsorships in advance, the report said.

Binette said the amount of the sponsorship deals were confidential records when Florida Politics asked this week.

Patrick Ransdell, UCF’s Executive Associate Athletics Director, was in charge of corporate sponsorship at the time and should have known the Jasper contract he signed was in violation, the report said.

The investigation was going to decide if Ransdell should be disciplined “for neglect of duty that caused a violation of the university’s naming rights agreement with Addition Financial,” and the report said Ransdell resigned. His last day at UCF was Dec. 31, 2021.

Ransdell moved on to be the Deputy Athletics Director for Appalachian State University, a North Carolina school far smaller than UCF, one of the biggest schools in the country that’s about to move into the Big 12 Conference. Appalachian State announced Ransdell took the job Dec. 2, according to a school press release.

Ransdell did not respond to a Florida Politics request for comment.

For the investigation, UCF did not interview White, who left UCF last year for a new job as athletic director for the University of Tennessee.

The report listed other issues, including deceptive financial practices and Sunshine Law violations for the UCF Convocation Corp., or UCFCC.

UCFCC has an important mission at the school. UCFCC took on the debt to finance the construction of large facilities for people to gather at the university. It also manages the 10,000-seat Addition Financial Arena, four student residence halls and more.

The UCFCC is what’s called a direct support organization — a private corporation located within a taxpayer-funded university. Direct support organizations keep most of their business confidential, and critics had accused them of not being transparent over the years, especially when the Orlando Sentinel sought to report payouts and contracts for UCF football coaches and staff.

The UCF new audit report detailed the UCFCC’s past mismanagement.

UCF transferred $312,000 into UCFCC’s bank account from another school-related fund and then within two weeks, the money was moved to the athletics association’s budget. There was no reason to transfer the money in June 2018 except to inflate UCFCC’s finances to look better, the report said. Investigators noted the money transfer came at a time when UCFCC’s money to pay for facilities’ capital improvements ran a growing deficit.

UCFCC board members, who also held high-ranking positions at the university, were told the $312,000 money transfer was routine.

The two officials with financial oversight — Chief Financial Officer William Merck and associate vice president John Pittman — were among a group of employees fired in the aftermath of the school’s misappropriations scandal.

Dale Whittaker, the UCF president who resigned in 2019, was not interviewed for the UCF investigation. Nor was Hitt, UCF’s president from 1992 until June 30, 2018.

The report also concluded high-ranking UCF leaders who served on the UCFCC board violated the Sunshine Law three times by meeting together without giving proper notice to the public or not documenting any minutes of what happened during the meeting.

Then UCF chief of staff Grant Heston, who chaired UCFCC’s board of directors, met with Merck, the UCFCC treasurer/secretary, and others during an August 2018 meeting that wasn’t properly noticed to the public.

“Heston stated in an interview that he did not think Merck was a board member and that a notice was not needed,” the report said. “Per the Sunshine Manual, the law is applicable to any gathering, whether formal or casual, of two or more members of the same board or commission to discuss some matter on which foreseeable action will be taken by the public board.”

The report said that away from the rest of the board members, Heston also appeared to be talking privately with White, another UCFCC board member. Merck may also have joined in those conversations.

Other board members — including then-UCF Vice President Maribeth Ehasz  — also were suspicious of Heston and White speaking privately.

In October 2018, the UCFCC board held a meeting, but some board members said they were told they didn’t need to go and no minutes were recorded to say what happened at the meeting, the report said.

Ehasz said, “It did not sit right with her” to be told not to go, according to the report.

Heston didn’t remember what was discussed at the meeting, he told investigators.

“Our review of email communications showed that the meeting was held to develop a plan on how to move arena operations under (the athletics association),” the report said.

When reached for comment this week, Heston, who no longer is at UCF, said he did not have time to review the audit report’s findings but added, “I recall most people at UCF focused on having meetings fully in the sunshine and by the book. I was absolutely committed to that. I expect this report will help reinforce it.”

White did not respond to a request for comment Monday.

In a statement, Binette listed multiple changes made since new UCF President Alexander Cartwright took over in April 2020.

“The university’s continued effort to strengthen policies and internal controls within direct support organizations is being led by Gerald Hector, who started as senior vice president for Administration and Finance in 2021,” Binette said in an email.

nextStaff moves continue in Nikki Fried world, as chief of staff moves to campaign side