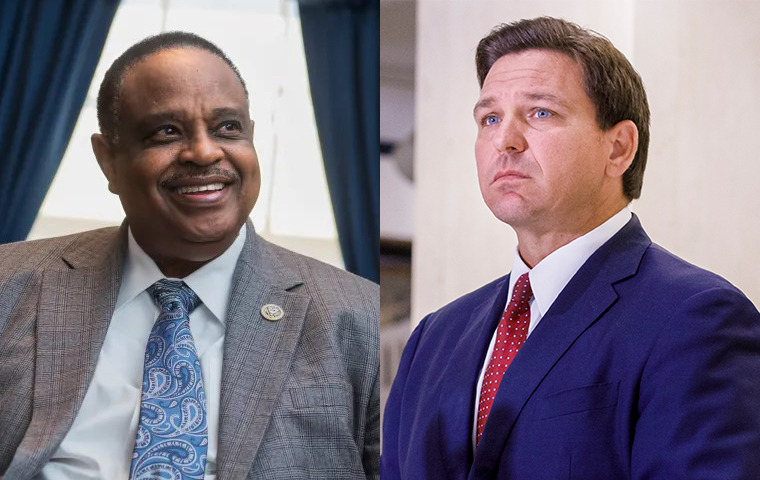 'His major fight now is coming with Donald Trump — and I don’t think he can beat Trump.'

Democratic U.S. Rep. Al Lawson wants to iron out a debate with Gov. Ron DeSantis over redistricting, a dispute the Congressman says is a move by DeSantis to angle for the 2024 Republican presidential nomination.

In a rare move, DeSantis’ office has proposed congressional maps, specifically calling the current 5th Congressional District, held by Lawson, an “unconstitutional gerrymander.” Although the Florida Supreme Court last week declined to issue an opinion on the constitutionality of CD 5, DeSantis’ office has doubled down with a new proposed map that would still split Lawson’s district.

State courts drew CD 5, which spans from Tallahassee to Jacksonville, to provide representation to Black voters in North Florida. But the Governor’s spokeswoman has said the district unnaturally connects communities in the two cities. DeSantis’ proposed map would, in North Florida, create seats that advantage Republicans.

Speaking to reporters during a voting rights rally Thursday, Lawson said he would like to have lunch with DeSantis, a former colleague in the U.S. House, to discuss minority access.

“I’m just saying you know, what’s going on, I served with you for two years, let’s have lunch and iron out your problem,” Lawson said. “What is your problem with minority access seats?”

The redistricting process has put DeSantis at odds with the Legislature. Cartographers in the state House and Senate consider the district a protected minority access district, and a similar district appears on every map, including the one passed already by the Senate.

Lawson said he has heard from Republican members of the Legislature who say they don’t want to scrap a North Florida minority access district.

“They don’t know why he wants to do that,” Lawson said. “They don’t see what he’s doing, because it does not make sense.”

Pundits have speculated the Governor’s Office produced their proposed maps in an effort to help Republicans take back the U.S. House in November by creating safer seats for the GOP. However, Lawson had a different take.

“What the Governor is doing is trying to show other Republicans across the country that he’s going to be the heir apparent to run for President,” Lawson said. “But his major fight now is coming with Donald Trump — and I don’t think he can beat Trump.”

Although the Florida Supreme Court declined to offer an opinion on CD 5’s constitutionality, all five justices concurred that the Governor’s request involved complex matters of law, which DeSantis and Florida House Speaker Chris Sprowls interpret to mean there’s a legitimate question about the seat’s legality.

If DeSantis has his way in North Florida, Lawson said, Florida would be a test case for the nation.

“If he’s successful in Florida, that means there’ll be no minority access districts throughout America,” Lawson said.

Lawson argued DeSantis doesn’t care about minority voters or minority access, and he is trying to segregate people.

“He started the fight, we’re not backing down from it, and we’re going to take him on,” Lawson said.

The Congressman’s comments came as elected officials at the state and local level rallied on the steps of Florida’s Historic Capitol against the Republican-led Legislature’s proposed election laws. The measures (SB 542/HB 7061) come on the heels of last year’s elections bill (SB 90), which is currently being challenged in federal court.

While the fight over CD 5 may affect Lawson’s future, he told reporters the right isn’t about him.

“It’s not about me or whether I’m serving,” Lawson said. “It’s about the people who are coming behind me, just like I came in as a result of the people who paved the way for me to come to the Legislature in 1982.”