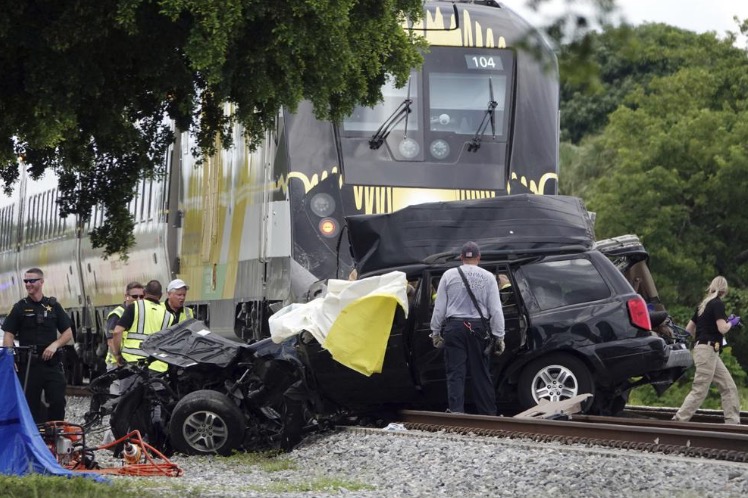 Brightline has had 58 deaths including 3 in past 10 days.

Representatives of South Florida’s higher-speed railroad, other train lines and local governments met with federal safety officials Wednesday to begin working out plans that they hope will decrease the number of fatal collisions between locomotives, cars and pedestrians.

The Federal Railroad Administration called the meeting as Brightline, the region’s new higher-speed passenger service, and other Florida railroads have seen a rash of fatal accidents over the past four years.

Brightline has had 58 deaths since it began operations in 2017, including three in the past 10 days, giving it the nation’s worst fatality rate per mile, according to an ongoing Associated Press analysis that began in 2019. Other Florida railroads are not far behind.

None of the deaths have been found to be the fault of Florida’s railroads or their crews, but that doesn’t mean the rail lines and federal, state and local governments can’t find mitigation strategies that work, said James Payne, who oversees the agency’s grade-crossing safety program.

“There is an issue in South Florida: People are dying,” Payne said. He said the region’s railroads should be aggressive in applying for chunks of the $15 billion in federal grants aimed at improving the nation’s rail safety. About 1,200 people die annually nationwide, he said.

South Florida’s commuter service Tri-Rail has the 13th-worst fatality rate and the Florida East Coast freight line is 15th-worst out of more than 800 U.S. railroads, according to the AP analysis. Most of the fatal accidents have been caused by drivers going around crossing gates, pedestrians trying to beat trains and suicides.

The fact that the train crews haven’t been responsible for the collisions doesn’t alleviate their mental distress, said Karl Alexy, the railroad administration’s chief safety officer. The AP has obtained police reports on about two-thirds of Brightline’s accidents; they show that at least 31 of its engineers and conductors have been involved in at least one fatal accident, at least 17 have been in two or more and at least six have been in four or five.

“This isn’t something these engineers and conductors experience and go home and brush it off,” Alexy said. “It stays with them — some of them retire because of the effect it has on them.”

Brightline spokesman Ben Porritt, who attended the meeting, said no one strategy will work to decrease the number of deaths — each section of track must be examined separately. In response to the accidents, Brightline has installed infrared detectors to warn engineers if anyone is lurking near the tracks so they can slow down or stop.

The company also has added more fencing and landscaping to make track access more difficult, is testing drones to monitor the tracks and is installing red-light cameras at crossings to enable police to ticket drivers who go around guardrails.

Porritt said the meeting showed the need for collaboration between the railroads, governments and law enforcement.

“This is not just a Brightline issue,” he said.

Brightline is nearing completion of an extension that will connect West Palm Beach and Orlando. It has plans to eventually connect Orlando with Tampa. It is also building a line that will connect Southern California with Las Vegas.